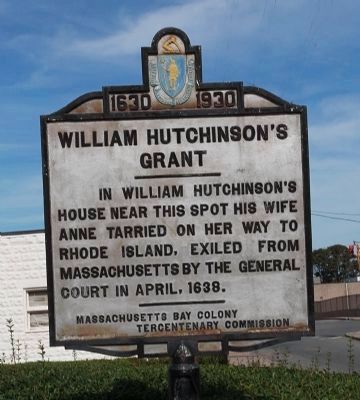 In William Hutchinson's house near this spot his wife Anne tarried on her way to Rhode Island, exiled from Massachusetts by the General Court in April, 1638.

Topics and series. This historical marker is listed in this topic list: Colonial Era. In addition, it is included in the Massachusetts Bay Colony—Tercentenary Commission Markers series list. A significant historical month for this entry is April 1638.

Location. 42° 15.916′ N, 71° 1.207′ W. Marker is in Quincy, Massachusetts, in Norfolk County. Marker is on Beale Street 0.1 miles north of Arlington Street, on the left when traveling north. Touch for map. Marker is in this post office area: Quincy MA 02170, United States of America. Touch for directions. 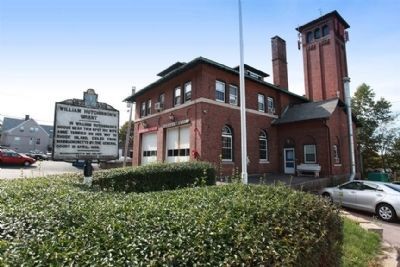 2. Quincy Historical Society. Founded in 1893 by local citizens led by Charles Francis Adams, Jr., Quincy Historical Society is dedicated to preserving and promoting knowledge about the full range of Quincy history. It remains a community-based organization even as it deals with topics of national and international, as well as local, interest. (Submitted on September 10, 2011, by Russell Chaffee Bixby of Bernardston, Massachusetts.)

Additional commentary.
1. Anne Hutchinson
This marker was on the running route I regularly followed when my wife, a native of Quincy, kids and I visited her parents. They lived on Colonial Drive, just off Adams Street. I always stopped to read the marker, especially taken by its wording that Anne "tarried on her way to Rhode Island." (It set me wondering what she did while she tarried.) I learned only a few years ago that, following her exile, Anne Hutchinson moved to the Bronx, where the Siwanoy Indians murdered her and all but one of her children. It turns out the Hutchinson River Parkway, popularly known as the "Hutch," which goes from the Throggs Neck Bridge to the Connecticut state line (and then continues north as the Merritt Parkway) is named for Anne Hutchinson.
— Submitted December 7, 2013, by Mr. N.I. Silver of Bethesda, Maryland.
Credits. This page was last revised on June 16, 2016. It was originally submitted on September 10, 2011, by Russell Chaffee Bixby of Bernardston, Massachusetts. This page has been viewed 1,164 times since then and 37 times this year. Last updated on October 26, 2011, by Russell Chaffee Bixby of Bernardston, Massachusetts. Photos:   1, 2. submitted on September 26, 2011, by Russell Chaffee Bixby of Bernardston, Massachusetts. • Bill Pfingsten was the editor who published this page.
Share This Page.