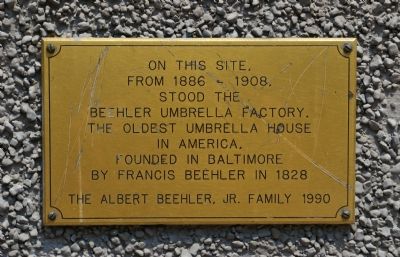 On this site, from 1886-1908, stood the Beehler Umbrella Factory, the oldest umbrella house in America. Founded in Baltimore by Francis Beehler in 1828.

Topics. This historical marker is listed in this topic list: Industry & Commerce. A significant historical year for this entry is 1828.

Location. 39° 17.502′ N, 76° 37.1′ W. Marker is in Downtown Baltimore in Baltimore, Maryland. Marker is on West Lexington Street east of North Howard street, on the left when traveling east. Touch for map. Marker is at or near this postal address: 204 W Lexington St, Baltimore MD 21201, United States of America. Touch for directions. 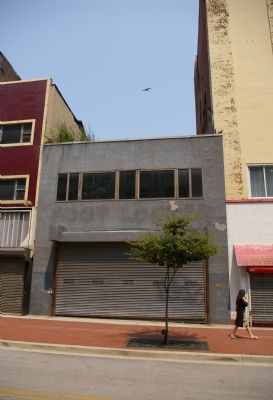 Photographed By Christopher Busta-Peck, August 3, 2007
2. Beehler Umbrella Factory Site
Marker can be seen on the right side of the center building, about halfway up the steel door.