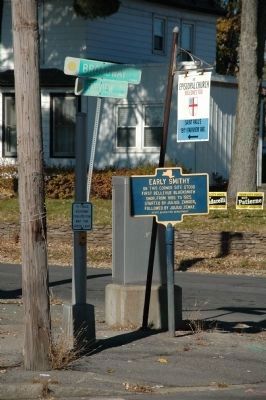 On this corner site stood
first Bellevue Blacksmith
shop, from 1885 to 1925.
Started by Julius Zander,
followed by Julius Zemke.

Topics. This historical marker is listed in this topic list: Industry & Commerce. A significant historical year for this entry is 1885.

By Howard C. Ohlhous, November 6, 2011
2. Early Smithy Marker
View is easterly on Broadway; the white car is headed in the direction of downtown Schenectady. The marker is on the left.

Click or scan to see
this page online
The daughter of the blacksmith Zander, Miss Helen R. Zander, wrote a letter to Schenectady Historian Larry Hart which he shared with Schenectady Gazette readers in his Tales of Old Dorp column on August 21, 1979;

..."My father, Julius Zander, was the first blacksmith at the corner of Broadway and Fairview and Julius Zemke was his helper. Strange, perhaps, that they were both naturalized citizens of German heritage and with the initials 'J.Z.' He began the business just before the turn of the century and built the shop that you recall being demolished in 1924 (where a gas station was later located at that point at, Fairview and Broadway, and where Cumberland Farms is now situated.) He also built our house about the same time as the shop."

"About 1911, when he was no longer able to wield the sledge hammer, my father sold out to Mr. Zemke. Then he opened a feed and hardware shop in the lower floor of our house next to the fire station. We lived upstairs. He also maintained the 'livery' that was mentioned in an earlier Old Dorp column. The farmers would come in from the country and leave their horse at my father's livery to be fed at noon and be out of the sun for the day while their owners took the streetcar downtown to shop. On their return, they would load their wagons with feed for their farm animals."
Credits. This page was last revised on June 16, 2016. It was originally submitted on November 7, 2011, by Howard C. Ohlhous of Duanesburg, New York. This page has been viewed 870 times since then and 40 times this year. Photos:   1, 2. submitted on November 7, 2011, by Howard C. Ohlhous of Duanesburg, New York. • Bill Pfingsten was the editor who published this page.
Share This Page.