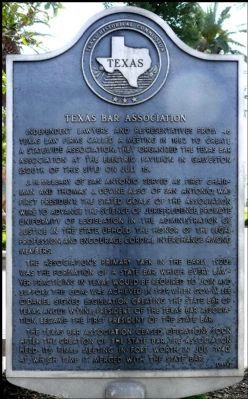 Independent lawyers and representatives from 46 Texas law firms called a meeting in 1882 to create a statewide association. They organized the Texas Bar Association at the Electric Pavilion in Galveston (south of this site) on July 15.

J.H. McLeary of San Antonio served as first chairman and Thomas J. Devine, also of San Antonio, was first president. The stated goals of the association were to advance the science of jurisprudence, promote uniformity of legislation in the administration of justice in the state, uphold the honor of the legal profession, and encourage cordial interchange among members.

The association's primary task in the early 1920s was the formation of a State Bar, which every lawyer practicing in Texas would be required to join and support. This goal was achieved in 1939, when Gov. W. Lee O'Daniel signed legislation creating the State Bar of Texas. Angus Wynne, president of the Texas Bar Association, became the first president of the State Bar.

The Texas Bar Association ceased operations soon after the creation of the State Bar. The association held its final meeting in Fort Worth in July 1940, 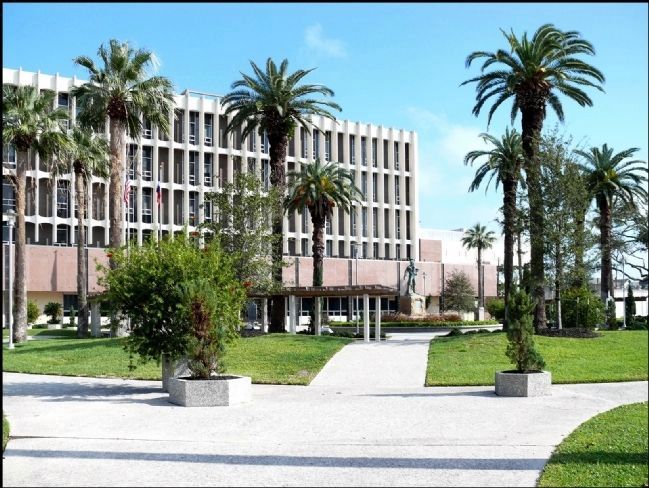 Photographed By Jim Evans, November 24, 2011
2. Texas Bar Association Marker
The marker is in front of the courthouse, near the circle around the statue -- about 200 feet ahead

Click or scan to see
this page online
at which time it merged with the State Bar.

Topics. This historical marker is listed in this topic list: Industry & Commerce. A significant historical month for this entry is July 1896.