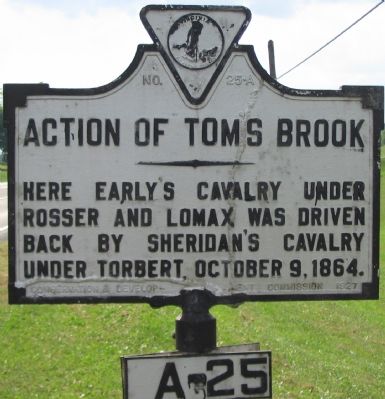 Here Early's Cavalry under Rosser and Lomax was driven back by Sheridan's cavalry under Torbert, October 9, 1864.

Topics and series. This historical marker is listed in this topic list: War, US Civil. In addition, it is included in the Virginia Department of Historic Resources series list. A significant historical date for this entry is October 9, 1952. 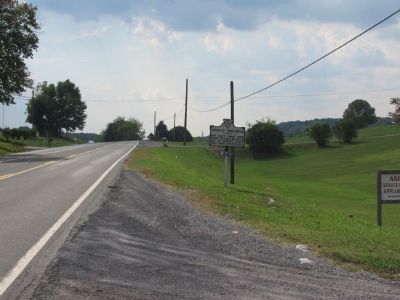 More about this marker. The marker is labeled with both the "old" and "new" sequence numbers of "25-A" on the marker text plate, and "A-25" on the plate below the marker. The submitter has opted to use the designation from "Virginia's Historical Markers" by Scott Arnold in referencing this marker.

Also see . . .  Battle of Toms Brook. From The Civil War in the Shenandoah Valley. (Submitted on October 13, 2007, by Craig Swain of Leesburg, Virginia.)

Additional commentary.
1. Early's Cavalry
Rosser commanded the "Laurel Brigade" which had originally been Ashby's cavalry. The unit had seen action in the Shenandoah Valley from 1861, and widely considered as one of the best available in the Army of Northern Virginia. However, by 1864 the Federal cavalry had grown in size, confidence, and competency, thus was often getting the better of the Confederates. Toms Brook was an example of that. Confederate General Jubal Early, commanding the southern forces in the Valley in 1864, had grown to disdain his cavalry as ineffective. After the battle of Toms Brook which precipitated "the Woodstock Races" (See related marker), Early would comment, "I never knew the laurel 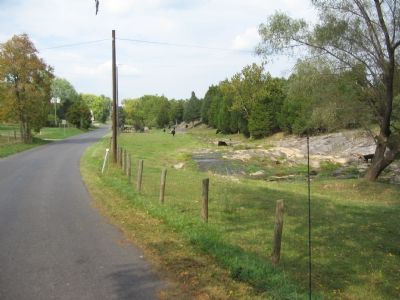 Photographed By Craig Swain, October 7, 2007
3. Toms Brook
Seen just to the west of the marker, Toms Brook did not present a major impediment to movement at the time, but did geographically separate the two forces at the start of the battle.
was a running vine. I think a pumpkin vine might be more appropriate."
— Submitted October 13, 2007, by Craig Swain of Leesburg, Virginia. 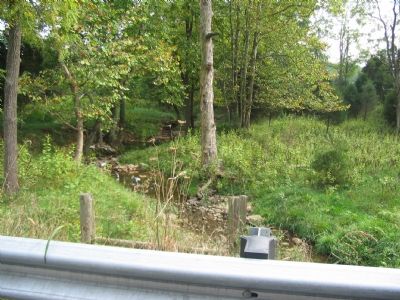 Photographed By Craig Swain, October 7, 2007
4. Custer and Rosser
Some two and a half miles west, where Back Road (County Route 623) crosses Toms Brook, Federals under Gen. Custer and Confederates under Gen. Rosser clashed. Both sides fought dismounted, taking cover behind the many stone walls along the farms and pastures in the vicinity. Part of Gen. Merritt's Federals were detached to support Custer, enabling an extension of the Union lines, eventually outflanking Rosser's Confederates. Rosser first attempted to refuse his left to counter this threat. This shortly turned into a general retreat when pressed from both front and flanks by the combined Federal force. All the while, Gen. Lomax's Confederate cavalry was similarly pressed to retreat by Federal forces along the Valley Pike (US 11).
Credits. This page was last revised on April 9, 2018. It was originally submitted on October 13, 2007, by Craig Swain of Leesburg, Virginia. This page has been viewed 1,784 times since then and 76 times this year. Last updated on December 9, 2011, by Don Hogan of Milton, Georgia. Photos:   1, 2, 3, 4. submitted on October 13, 2007, by Craig Swain of Leesburg, Virginia.
Share this page.