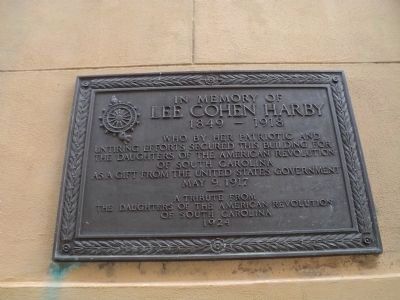 In Memory of
Lee Cohen Harby
1849 - 1918
Who by Her Patriotic and
Untiring Efforts Secured This Building for
The Daughters of the American Revolution
of South Carolina
As a Gift from the United States Government
May 9, 1917
———

Erected 1924 by Daughters of the American Revolution of South Carolina.

Topics and series. This historical marker is listed in these topic lists: Fraternal or Sororal Organizations • Patriots & Patriotism • Women. In addition, it is included in the Daughters of the American Revolution (DAR) series list. A significant historical month for this entry is May 1752. 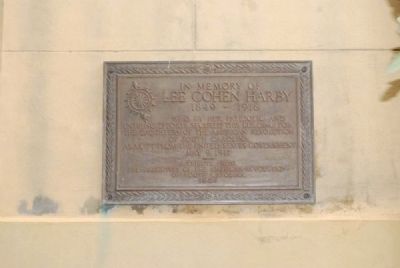 Additional commentary.
1. Lee Cohen Harby
Lee Cohen was born at Charleston, South Carolina, 1849. She is the daughter of Marx E. Cohen and Armida Harby, and was educated at home as so many Southern girls were before the War between the States. Her ancestors were either great soldiers or great authors, so when one studies Lee Cohen's an•cestry it can be well understood how she received her fighting and persevering 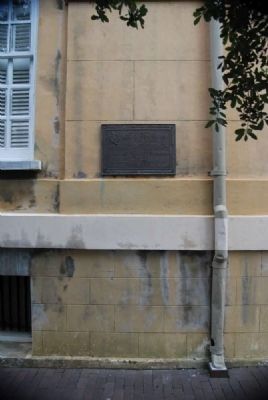 Photographed By Brian Scott, September 20, 2011
3. Lee Cohen Harby Marker
qualities from her Revolutionary grandfather Harby, and her literary talents from Isaac Harby, the critic, essayist and dramatist, another ancestor.

Her life as a child was spent on a large Southern plantation, just the place to develop the poetry in one's nature. Her father, a graduate of the University of Glasgow, was a very scholarly man and he directed her education, and to his influence, and that of a great-aunt who lived with them is she indebted for the literary turn that was given to her life.

She was very young when she married her second cousin, J. D. Harby, and moved to Galveston, Texas. It was there in 1873 her first article, Christmas Before the War, appeared. In 1879 she moved to Houston, Texas, and there her poems appeared very often and were well received. She gave the poem of welcome to the Press Association which met there in 1880. From time to time her articles were sent to Harper's and the Magazine of American History. The City of a Prince, a historical paper concerning a colony of Germans who settled in Texas, so attracted attention that she was invited to become a member of the American Historical Association, and read before that body a paper called The Earliest Texas. Her historical work pertains very largely to Texas, her adopted and much loved State. She contributed many of these articles to Frank Leslie's Illustrated Paper.

Mrs. Harby has always loved everything pertaining to the South, and is ever found foremost in any enterprise that will help the Confederate veterans or the cause they represent. She says, "I love everything Confederate until it is painful." Charleston, her native city, is indebted to her for the Confederate reunion in 1899, and to that is due very much Charleston's rapid growth and recognition since. The large number attending that reunion, over fifty thousand, had their eyes opened as never before to the beauties and possibilities of that grand old Southern city by the sea, and the Exposition was the outcome of that reunion. Mrs. Harby's work in this was recognized and she was placed upon the most important committees. She remained in Charleston from 1898 to 1902. Her home for several years past has been in New York, but her heart is in Texas.

She has written many of her poems for Confederate reunions, and like occasions. She won the one-hundred-dollar prize for the words to the flag song for Texas. She wrote The Men Who Wore the Gray for the Houston reunion; The Gathering of the Camps for the Richmond reunion; Our Grand U.C.V for the Charleston reunion.

The veterans have honored her in many ways. She was largely responsible for organizing the Pacific Division U.C.V., and they made her Assistant Adjutant-General of the Division, with rank of Lieutenant-Colonel. She was sent as their delegate to three reunions, and acted as their sponsor at two—the only instance recorded where any married woman has had this honor; and again when a flag was to be presented to General Moorman by the Division Mrs. Harby, instead of one of the men of the Camp, was asked to make the speech of presentation. (Source: The South in History and Literature: A Hand-book of Southern Authors, From the Settlement of Jamestown, 1607, to Living Writers by Mildred Lewis Rutherford (1906), pgs 246-248.)
— Submitted December 13, 2011, by Brian Scott of Anderson, South Carolina.
Credits. This page was last revised on December 12, 2019. It was originally submitted on December 13, 2011, by Brian Scott of Anderson, South Carolina. This page has been viewed 741 times since then and 80 times this year. Photos:   1. submitted on August 8, 2013, by Bill Coughlin of Woodland Park, New Jersey.   2, 3. submitted on December 13, 2011, by Brian Scott of Anderson, South Carolina.
Share this page.