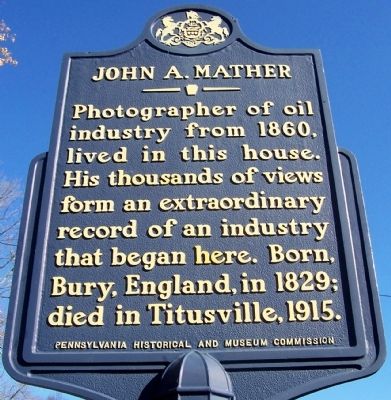 By Forest McDermott, October 25, 2009
1. John A. Mather Marker
Inscription.
John A. Mather. . Photographer of oil industry from 1860, lived in this house. His thousands of views form an extraordinary record of an industry that began here. Born, Bury, England, in 1829; died Titusville, 1915. . This historical marker was erected in 1964 by Pennsylvania Historical and Museum Commission. It is in Titusville in Crawford County Pennsylvania

Photographer of oil industry from 1860, lived in this house. His thousands of views form an extraordinary record of an industry that began here. Born, Bury, England, in 1829; died Titusville, 1915.

Topics and series. This historical marker is listed in these topic lists: Arts, Letters, Music • Industry & Commerce. In addition, it is included in the Pennsylvania Historical and Museum Commission series list. A significant historical year for this entry is 1860.

Location. 41° 37.696′ N, 79° 40.009′ W. Marker is in Titusville, Pennsylvania, in Crawford County. Marker is on Main Street west of Brown Street, on the left when traveling west. Touch for map. Marker is at or near this postal address: 407 East Main Street, Titusville PA 16354, United States of America. Touch for directions.

Other nearby markers. At least 8 other markers are within walking distance of this marker. John Mather Home (a few steps from this marker); The Tarbell House (about 300 feet away, measured in a direct line); Ida M. Tarbell (about 400 feet away); McKinney Hall (about 500 feet away); John William Heisman 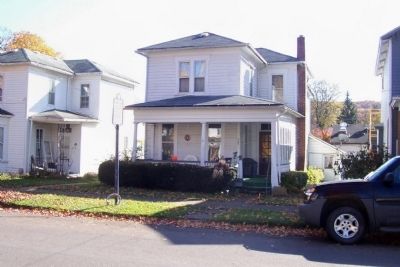 Click or scan to see
this page online
(about 500 feet away); Townville Episcopal Chapel Bell (about 700 feet away); George Custer Home (approx. 0.2 miles away); Burgess Park (approx. 0.3 miles away). Touch for a list and map of all markers in Titusville.