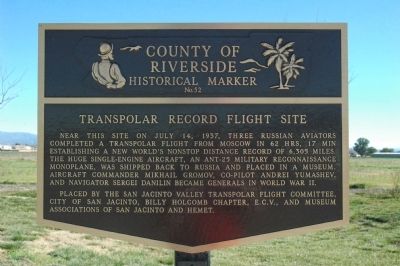 Topics and series. This historical marker is listed in these topic lists: Air & Space • Notable Events. In addition, it is included in the E Clampus Vitus series list. A significant historical month for this entry is July 1840.

Location. 33° 47.232′ N, 117° 0.676′ W. Marker is in San Jacinto, California, in Riverside County. Marker is at the intersection of Cottonwood Avenue and South Sanderson Avenue, on the right when traveling 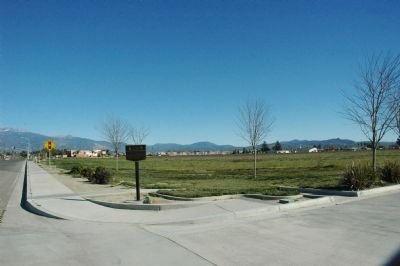 Click or scan to see
this page online
east on Cottonwood Avenue. Touch for map. Marker is in this post office area: San Jacinto CA 92582, United States of America. Touch for directions.

Regarding Transpolar Record Flight Site. Three flights originated near Moscow, U.S.S.R. and two landed on the North American West Coast. The first landed at Vancouver, Washington and the second, which landed near San Jacinto, was originally intended to go to San Francisco or its alternate destination, San Diego. Both cities were fogged in and the pilots landed the plane on the first ground they could see. The third flight disappeared over the North Pole. SOURCE: Billy Holcomb Chapter 1069 35th Anniversary Plaque Book by Phillip Holdaway

Related markers. Click here for a list of markers that are related to this marker. Soviet Transpolar Flights of 1937 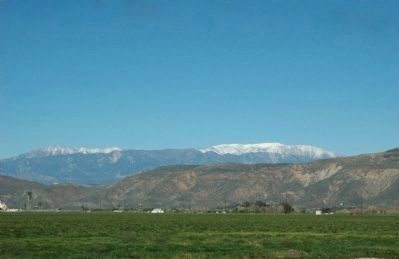 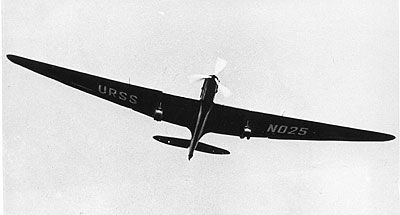