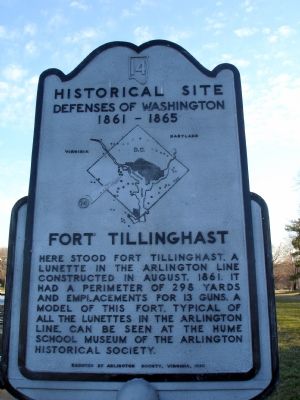 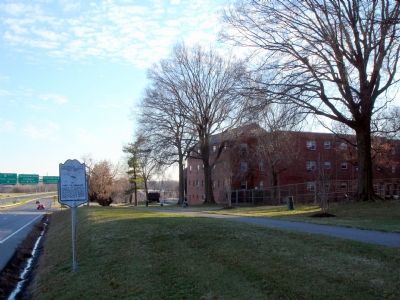 More about this marker. In the center of the marker is a map of the Washington Defenses, with a red (weathered) arrow pointing out the location of Fort Tillinghast.

The fort stood near 205 North Wayne Street, but no sections remain today. It was named in honor of Captain Otis H. Tillinghast, Quartermaster, killed at the First Bull Run on July 21, 1861. Along with Forts Cass, Woodbury, Morton, and Strong, Fort Tillinghast was a lunette which covered the approaches to the Aqueduct Bridge (near the modern Key Bridge).

Garrison units at different times included the 16th Maine Infantry, 1st Massachusetts Heavy Artillery, 4th New York Heavy Artillery, and the 145th and 138th Ohio Infantry.
— Submitted February 4, 2008, by Craig Swain of Leesburg, Virginia.
Credits. This page was last revised on May 27, 2019. It was originally submitted on February 4, 2008. This page has been viewed 1,917 times since then and 50 times this year. Photos:   1, 2. submitted on February 4, 2008. • Craig Swain was the editor who published this page.
Share This Page.