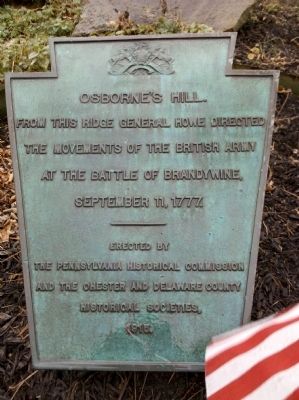 By Keith S Smith, December 15, 2011
1. Osborne's Hill Marker
Inscription.
Osborne's Hill. . From this ridge General Howe directed the movements of the British Army during the Battle of Brandywine, September 11, 1777. . This historical marker was erected in 1915 by The Pennsylvania Historical Commission and the Chester and Delaware County Historical Societies. It is in Birmingham Township in Chester County Pennsylvania

From this ridge General Howe directed the movements of the British Army during the Battle of Brandywine, September 11, 1777.

Erected 1915 by The Pennsylvania Historical Commission and the Chester and Delaware County Historical Societies.

Topics and series. This historical marker is listed in these topic lists: Notable Events • Notable Places • War, US Revolutionary. In addition, it is included in the Pennsylvania Historical and Museum Commission series list. A significant historical month for this entry is September 1966.

Other nearby markers. At least 8 other markers are within 2 miles of this marker, measured as the crow flies. Osborne Hill (a few steps from this marker); Birthplace of Isaac Sharpless (approx. 0.3 miles away); Battle of Brandywine (approx. one mile away); Sconnelltown 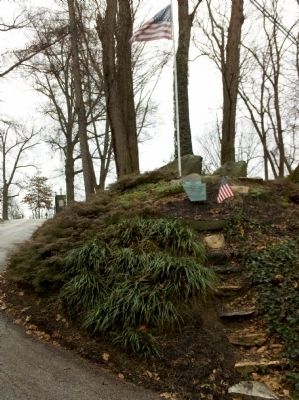 Additional commentary.
1. As seen by Joseph Townsend
A young Chester County resident named Joseph Townsend observed General William Howe's activities on Osborne's Hill on the day of the Battle of Brandywine and recalled his observations in an account published years afterward.

He noted that he saw the chief British commander "mounted on a large English horse," which he remembered as being "much reduced in flesh," after its long voyage from New York and march from the Chesapeake. In fact, many of the British Army's horses had died at sea from disease during the extended six-week swing along the Atlantic coast. The young Quaker watched the commander "in consultation" with his principal aides until a "tremendous roaring of cannon" and a "volume of smoke" in the vicinity of Chad's Ford distracted him.
— Submitted December 16, 2011, by Keith S Smith of West Chester, Pennsylvania.