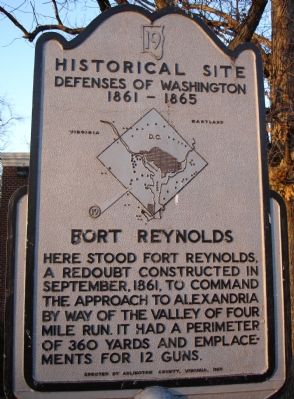 February 2, 2008
1. Fort Reynolds Marker
Inscription.
Fort Reynolds. Historical Site. Here stood Fort Reynolds, a redoubt constructed in September, 1861, to command the approach to Alexandria by way of the valley of Four Mile Run. It had a perimeter of 360 yards and emplacements for 12 guns. . This historical marker was erected in 1965 by Arlington County, Virginia. It is in Arlington in Arlington County Virginia

Here stood Fort Reynolds, a redoubt constructed in September, 1861, to command the approach to Alexandria by way of the valley of Four Mile Run. It had a perimeter of 360 yards and emplacements for 12 guns. 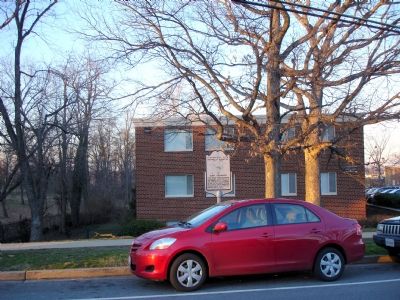 More about this marker. In the center of the marker is a map of the Washington Defenses, with a red (weathered) arrow pointing out the location of Fort Reynolds.

Named for General John F. Reynolds, killed in action at Gettysburg on July 1, 1863. It was originally named Fort Blenker after Brig. Gen. Louis (Ludwig) Blenker, commander of the troops who built the fort in 1861. The fort covered Four Mile Run. The site of the fort is now an apartment complex at the 4500 block of 31st Street (the city of Arlington attempted to preserve the works in the 1950s but failed).

With a perimeter of 360 yards and 12 gun emplacements, the fort was armed with four 32-pdr guns, four 12-pdr howitzers, three 30-pdr Parrott rifles, one 10-inch mortar and two 24-pdr mortars. magazines were placed in the ravine behind the fort. Units garrisoning the fort included the 1st Connecticut Heavy Artillery, 124th Pennsylvania Volunteer Infantry, and the 166th Ohio National Guard.
— Submitted February 4, 2008, by Craig Swain of Leesburg, Virginia.
Credits. This page was last revised on May 27, 2019. It was originally submitted on February 4, 2008. This page has been viewed 1,440 times since then and 8 times this year. Photos:   1, 2. submitted on February 4, 2008. • Craig Swain was the editor who published this page.
Share This Page.