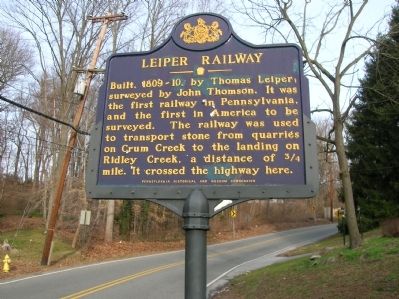 Photographed By Stephen Nazigian, January 18, 2012
1. Leiper Railway Marker
First permanent tramway in America
Inscription.
Leiper Railway. . Built, 1809-10, by Thomas Leiper; surveyed by John Thompson. It was the first railway in Pennsylvania, and the first in America to be surveyed. The railway was used to transport stone from quarries on Crum Creek to the landing on Ridley Creek, a distance of 3/4 mile. It crossed the highway here. . This historical marker was erected by Pennsylvania Historical and Museum Commission. It is in Nether Providence Township in Delaware County Pennsylvania

Built, 1809-10, by Thomas Leiper; surveyed by John Thompson. It was the first railway in Pennsylvania, and the first in America to be surveyed. The railway was used to transport stone from quarries on Crum Creek to the landing on Ridley Creek, a distance of 3/4 mile. It crossed the highway here.

Topics and series. This historical marker is listed in these topic lists: Industry & Commerce • Man-Made Features • Railroads & Streetcars • Settlements & Settlers. In addition, it is included in the Pennsylvania Historical and Museum Commission series list.

Location. 39° 52.566′ N, 75° 21.466′ W. Marker is in Nether Providence Township, Pennsylvania, in Delaware County. Marker is at the intersection of Bullens Lane and Glen Road, on the right when traveling east on Bullens Lane. Touch for map. Marker is at or near this postal address: 28 Bullens Lane, Wallingford PA 19086, United States of America. Touch for directions.

Other nearby markers. At least 8 other markers are within 2 miles of this marker, measured as the crow flies. First Friends Meeting (approx.

Regarding Leiper Railway. "Leiper" is pronounced as Leap-er. From Wikipedia: The Leiper Railroad was a horse drawn railroad that operated between 1810 and 1828 in what is now Nether Providence Township, Delaware County, Pennsylvania. It was replaced by the Leiper Canal, remnants of which are still visible. It was the first documented railroad in America.
The credit of constructing the first permanent tramway in America may therefore be rightly given to Thomas Leiper. He was the owner of a fine quarry not far from Philadelphia, and was much concerned to find an easy mode of carrying stone to tide-water. That a railway would accomplish this end he seem to have had no doubt. To test the matter, and at the same time afford a public exhibition of the merits of tramways, he built a temporary track in the yard of the Bull's Head Tavern in Philadelphia. The tramway was some sixty feet long, had a grade of one inch and a half to the yard, and up it, to the amazement of the spectators, one horse used to draw a four-wheeled wagon loaded with a weight of ten thousand pounds. This was the summer of 1809. Before autumn laborers were at work building a railway from the quarry to the nearest landing, a distance of three quarters of a mile. In the spring of 1810 the road began to be used and continued in using during eighteen years.
From page 494 of A History of the People of the United States, from the Revolution to the Civil War by John Bach McMaster. It is now in the public domain and available from Google Books.