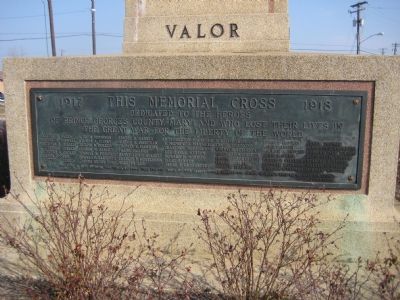 This memorial cross dedicated to the heroes of Prince George’s County, Maryland, who lost their lives in the Great War for the liberty of the world.

The right is more precious than 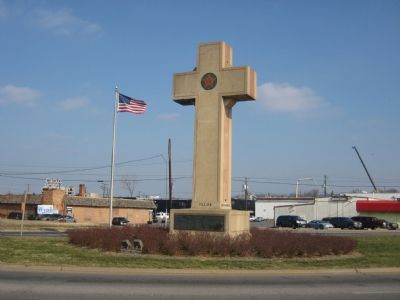 Click or scan to see
this page online
peace. We shall fight for the things we have always carried nearest our hearts. To such a task we dedicate our lives. —Woodrow Wilson.

Topics and series. This memorial is listed in this topic list: War, World I. In addition, it is included in the Former U.S. Presidents: #28 Woodrow Wilson series list.

Also see . . .  Judge: Forty-foot cross is not a government endorsement of religion 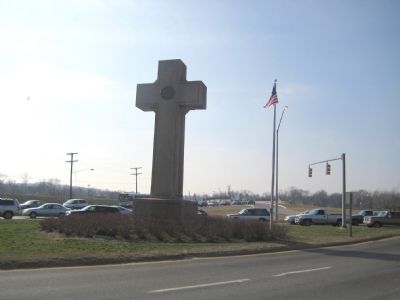 By F. Robby, January 28, 2008
3. West Side of Cross
The cross makes an impressive sight from all sides when approaching the MD-202 and MD-450 intersection.
. 2015 Washington Post article by Matt Zapotosky. This article describes the ruling that ended the controversy over this monument. (Submitted on December 2, 2015.)

Additional commentary.
1. Peace Cross
Growing up in this area, in the 1940’s and ’50’s this area was known as “Peace Cross.” The intersection was known as the Crossroads, as was a Bar/Lounge there (not unlike the building in picture 2, behind the flag). My mother sang there on weekends. Also in the intersection was “The Honor Roll” memorial.
— Submitted February 5, 2008, by Mike Stroud of Bluffton, South Carolina.