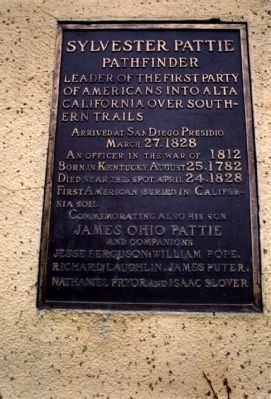 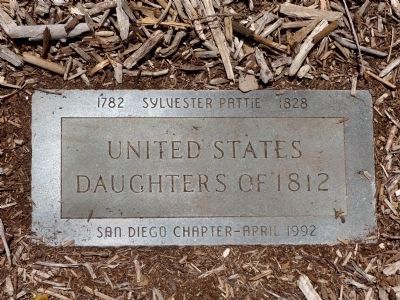 “Sylvester Pattie and his son, James Ohio Pattie, led a trapping expedition to New Mexico in 1824. In 1827, the Patties, along with Nathaniel Pryor, Richard Laughlin, William Pope, Isaac Slover, Jesse Ferguston, James Puter and several others left Santa Fe on a trapping expedition that led into Arizona and California. The party reached the junctions of the Colorado and Gila rivers on December 1, 1827. Being told by the Yuman Indians that there were Christians down river, the party began following the Colorado River southward. On February 16, 1828, the party buried their traps and furs and started westward across the Baja desert. They reached Santa Catarina Mission on March 12, 1828. Ten days later, the party was arrested as Spanish spies by a wary Mexican governor, Jose de Maria Echeandia, and brought to San Diego. Sylvester Pattie died while 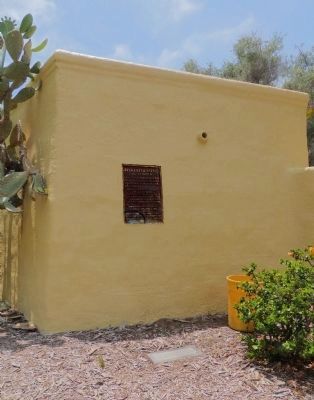 By Allen C. Browne, May 29, 2015
3. Sylvester Pattie Marker
imprisoned at the San Diego Presidio on April 24, 1828, and the remainder of the party was held captive until February 1829. The deceased expedition leader is credited as being both the first leader of an American expedition across the Southwest to California, and as the first American buried in California soil.

Sylvester’s son James Pattie was later enlisted by Echeandia to help inoculate Californians against smallpox; however, his claim to have vaccinated 20,000 people seems a bit ambitious. Pattie returned to the East in 1830 and published his story, "Personal Narrative of James O. Pattie of Kentucky," which became “the first Western potboiler.” The story of the Pattie Party’s imprisonment and his father’s death remained relatively unknown in San Diego until researchers associated with the San Diego Historical Society began to gather information in the early twentieth century. Isaac Frazee, a Long Beach resident, spearheaded the movement for recognition of the Pattie Party by the placement of a plaque on Presidio Hill. Frazee was the grandson of Ephraim Frazee and nephew of Dr. Lewis J. Frazee, who both knew and grew up with Sylvester Pattie in Kentucky. It was out of Frazee’s interest in his family history that he first became aware of the Pattie Party, and he was soon an outspoken advocate for the memorialization of Sylvester Pattie and the rest of his 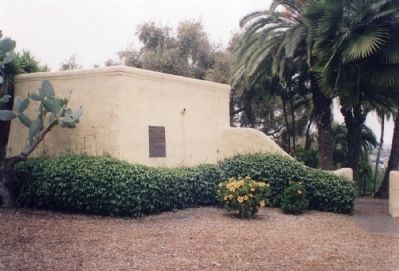 By Michael Kindig, May 26, 2001
4. Sylvester Pattie Marker
party in San Diego, where their expedition had come to an end. The San Diego Historical Society took up Frazee’s cause in 1929 with the enthusiasm of both George Marston and John Davidson, and was able to dedicate a bronze memorial plaque on Presidio Hill in honor of Sylvester Pattie and the Pattie Party on April 24, 1931, the anniversary of Sylvester Pattie’s death. The bronze tablet bearing the names of the imprisoned men is located on the bastion of Presidio Hill, which is nearest to the site of the old prison as possible due to the changed landscape since 1829.” 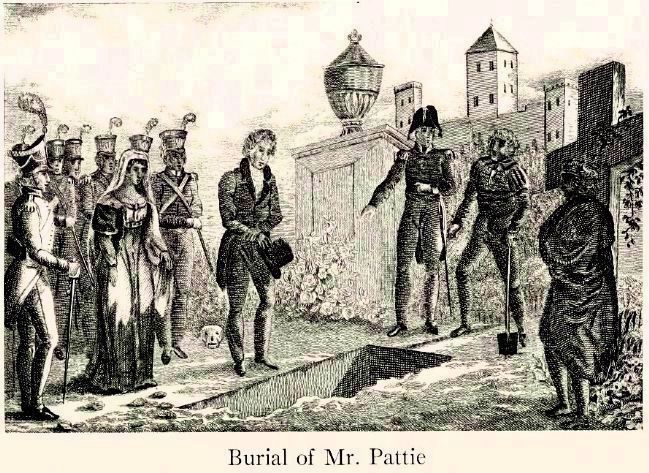 By J. O. Pattie
5. The Burial of Mr. Pattie
From The Personal Narrative of James O. Pattie, of Kentucky, 1905. 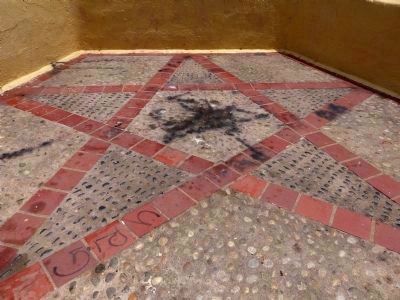 By Allen C. Browne, May 29, 2015
6. Pentagram
On the Roof of the Pattie Memoral
This structure is widely reported to be haunted and this Pentagram appears to have been used for ritual purposes.
More. Search the internet for Sylvester Pattie.