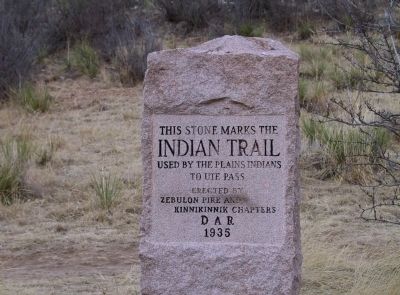 Photographed By Michael Kindig, March 30, 2008
1. Indian Trail Marker
Inscription.
Indian Trail. . This stone marks the Indian Trail used by the Plains Indians to Ute Pass . This historical marker was erected in 1935 by Zebulon Pike and Kinnikinnik Chapters DAR. It is in Colorado Springs in El Paso County Colorado

Topics and series. This historical marker is listed in these topic lists: Native Americans • Notable Places. In addition, it is included in the Daughters of the American Revolution (DAR) series list.

Editor’s want-list for this marker. A wide shot of the marker and its surroundings. • • Can you help?
Share this page.