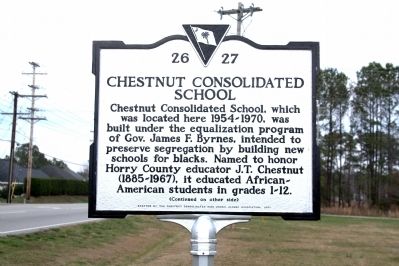 Topics. This historical marker is listed in these topic lists: African Americans • Education. A significant historical year for this entry is 1970. 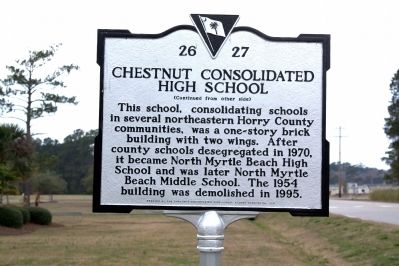 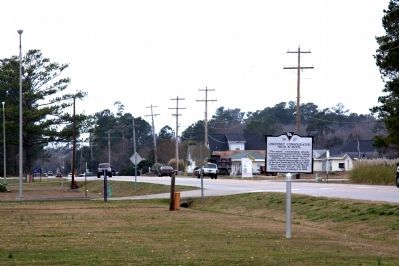 Photographed By J. J. Prats, February 11, 2012
3. Chestnut Consolidated School Marker
Chestnut went out in his own personal bus to pickup the children. Children that lived in Little River Neck had to walk to Nixon’s Crossroads to meet the bus. ” (Submitted on February 11, 2012.)

Additional commentary.
1. A Historic Perspective
The journey to the establishment of Chestnut Consolidated School can be traced back to the Dred Scott decision of 1857 by the U.S. Supreme Court that slavery was legal. In 1868 the 14th amendment to the U.S. Constitution was ratified, which defined citizenship and included the equal protection clause, essentially overruling the Dred Scott decision. Once again, another major U.S. Supreme court case known as Plessey versus Ferguson (1896) resulted in the separate but equal doctrine for blacks and whites. The segregation part of the law was complied with, but the equal part was a dismal failure.

In the ensuing years, Mr. Julius Rosenwald, a New York philanthropist, partnered with the incomparable Dr. Booker T. Washington in 1911 to perform a public service of the highest order. Together they made a contribution of enduring value, which changed the 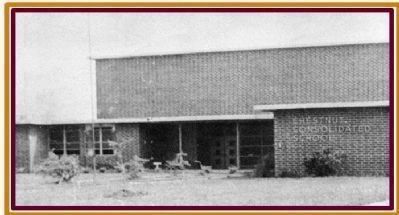 Photographed By David C. Wilson
4. Chestnut Consolidated School - Front of original building
This is a partial view front of the original buildings as seen in the fifties.
course of American history. It been called the “most influential philanthropic force that came to the aid of Negroes at that time.” It eventually provided seed grants for the construction of more than 5,300 buildings in 15 states, including schools, shops, and teachers’ houses, which were built by and for African Americans. Most of these school buildings are gone as would be expected because of changing times. Six of the eleven community schools that became feeders to Chestnut Consolidated School were Rosenwald Schools. The Rosenwald initiative had four parts raised enough funds to build schools. The four parts were: 1) Rosenwald appropriation, 2) white contribution, 3) Negro contribution [local community] and 4) public contribution. Prior to and during the Rosenwald initiative, children living in rural areas attended classes were in their local churches. Even after this initiative, many children continued to attend school in their local churches until the early 1940’s.

The typical school community during this period was a two room wood structure, with outdoor toilets and some form of drinking water usually a hand water pump located on the school ground. The schools housed grades 1- 7 and some included up to eight 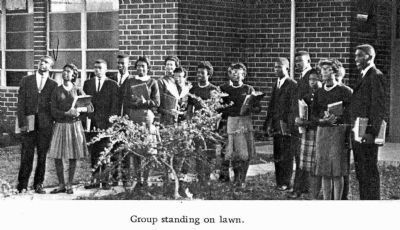 Photographed By David C. Wilson, Fall 1961
5. Seniors standing on the lawn - Class of 1962
grades. Few teachers at the time had four-year college degrees. Most of all, in spite of this and other efforts, the lack of resources resulted in a poor education outcomes for blacks.

Each step along the way resulted in an improvement in education for African Americans. Poplar and Loris Training Schools did not have a gymnasium. Many African American high schools during this period in the south were considered training schools, rather than high schools. Many of these training schools only added 12th grade in 1948. All competitive sports were played outdoors. There were very few school buses to transport children from their local communities to either of these two schools. Often, in order for a student to attend high school, he/she would need to board with a family living near one of these two schools. Some of the students from this area boarded with families in Conway in order to attend Whittemore High School.

On December 22, 1950, Mr. Harry Briggs of Clarendon County filed a lawsuit in federal lawsuit filed in Federal District Court challenging the constitutionality of the state’s “separate but equal” education provision. As the Briggs vs. Elliott case and three other similar cases played out in the 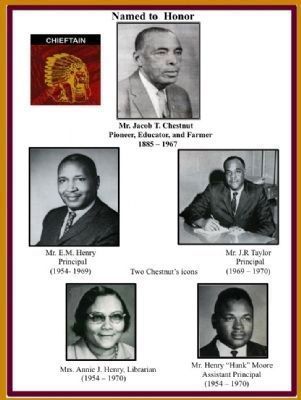 Photographed By David C. Wilson
6. Chestnut Consolidated School - Leaders
Click on the image for larger view.
courts, including Brown vs. Topeka Kansas Board of Education, South Carolina passed a three-cent sales to fund a statewide program of school constructions in order to finance the equalization program, which was designed to equalize white and black public schools. On December18, 1953, The Myrtle Beach Sun reported that two Negro Schools would be constructed in Horry County, one was Finklea at a cost of $422,000 and one in Wampee (Chestnut was not yet named at the time) at a cost of $214,000 on 18 acres between Nixon Crossroads and Wampee. Chief Justice Earl Warren combined Briggs and others with the Brown case. On May 17, 1954, the Brown vs. Board of Education case in a nine to zero decisions the U.S. Supreme Court ruled that segregation of the schools violated the “Equal Protection Clause” under the Fourteenth Amendment; and was therefore, unconstitutional.

In the fall of 1954, Chestnut Consolidated School opened its doors as a school. It was located on the current site of North Myrtle Beach Middle School. It was built under the equalization program of Gov. James F. Byrnes, intended to preserve segregation by building new schools for blacks. The school was named in honor of a prominent Horry County educator, Mr. 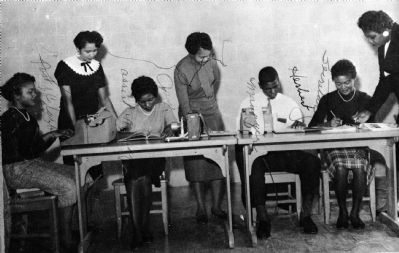 Photographed By David C. Wilson
7. Class of 1960 Yearbook Staff
Jacob T. Chestnut (1885 – 1967). It educated African-American students in grades 1 – 12. The establishment of the school in 1954, consolidating schools in several northeastern Horry County communities, was a one story brick building with two wings, one for middle and high school students and the second for elementary students. Longs Elementary and Poplar Elementary Schools (grades 1 – 6) were feeders to Chestnut Consolidated School. The newly established school brought together children from Atlantic Beach, Little River, Little River Neck, Brooksville, Mt. Calvary#1, Red Bluff, Cedar Branch, and Longs. There were only three black high schools in Horry County during this period. The school colors were gold and maroon, and its mascot was “CHIEFTAIN.”

In 1957 after being open for only three years, the school won the state championship in basketball. In the fall of 1963, a football team was established. As part of the curriculum, the school had two well organized programs known as New Farmers of America (N.F.A.) for the male students under the leadership of the Mr. James F. Fitts and New Homemakers of America (N.H.A.) under the leaderships of the late Gladys Murray and Mrs. Bessie E. Ridgley (Malloy). 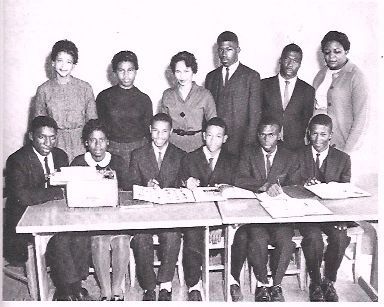 Photographed By David C. Wilson
8. Class of 1962 Yearbook Staff
These organizations were the counterpart to Future Farmers of America (F.F.A.) and Future Homemakers of America (F.H.A.) that white students had in their schools. These programs were not as academically challenging as some other courses. They gave the opportunity to model real-life situations and have had a lasting effect on those who completed the N.F.A or N.H.A. programs. For the first 10 years, despite the equalization program, Chestnut Consolidated High School curriculum was minimal. There were four units of English, but courses in mathematics ended in 10th grade with Algebra. There were no offerings in geometry, trigonometry, algebra II or physics. There were no advanced placement courses. The curriculum improved in the mid-sixties with offering many of the courses not previously offered. The Southern Association of Colleges and Schools (SACS) subsequently accredited the school in 1969. SACS is one of seven regionally accrediting agencies in the United States and it is significant to be accredited by one of them. Nevertheless, graduates of the school went on to become productive citizens, including many, that became teachers, doctors, nurses, attorneys, engineers, senior military officers, business executives, and entrepreneurs. 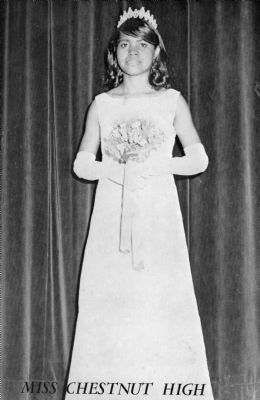 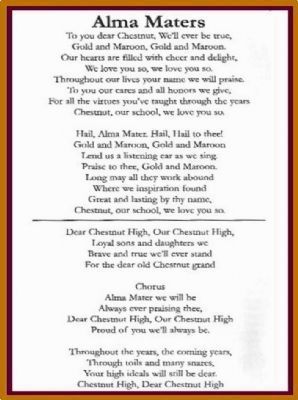 Throughout the years, the coming years,
Through toils and many snares,
Your high ideals will still be dear.
Chestnut High, Dear Chestnut High.
— Submitted August 19, 2012. 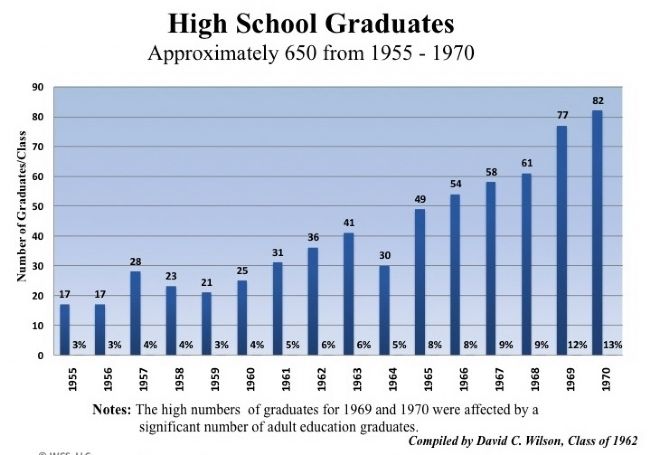 Photographed By David C. Wilson
11. Graph of graduates by year 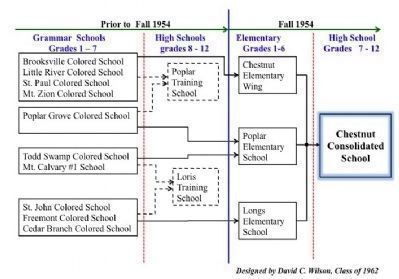 Photographed By David C. Wilson
12. Feeder schools after the establishment of Chestnut
Click on the image for larger view. 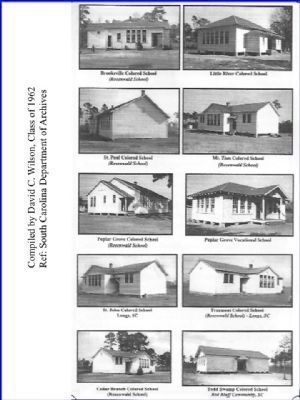 Photographed By David C. Wilson
13. Pictures of the feeder schools before Chestnut was established in 1954
Click on the image for larger view. 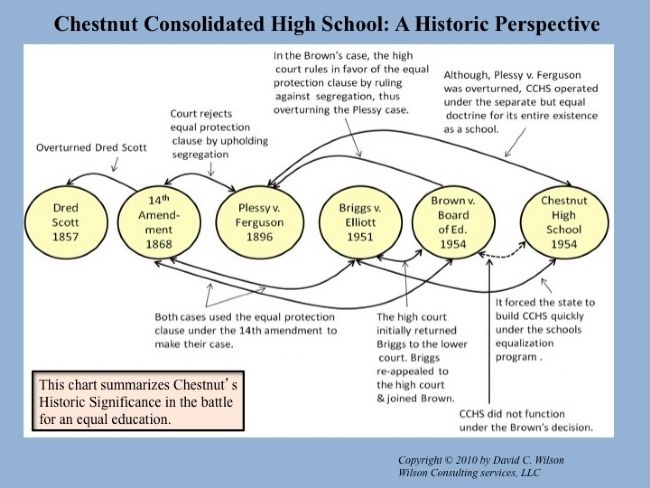 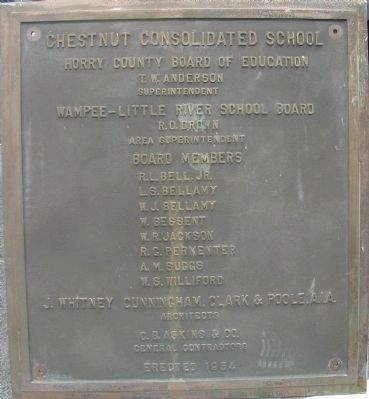