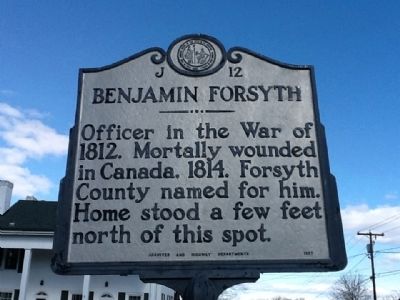 Photographed By Michael C. Wilcox, February 11, 2012
1. Benjamin Forsyth Marker
Inscription.
Benjamin Forsyth. . Officer in the War of 18 12. Mortally wounded in Canada, 1814. Forsyth County named for him. Home stood a few feet north of this spot. . This historical marker was erected by NC Archives and Highway Departments. It is in Germanton in Stokes County North Carolina

Officer in the War of 1812. Mortally wounded in Canada, 1814. Forsyth County named for him. Home stood a few feet north of this spot.

Topics and series. This historical marker is listed in this topic list: War of 1812. In addition, it is included in the North Carolina Division of Archives and History series list. A significant historical year for this entry is 1812.

Other nearby markers. At least 8 other markers are within 8 miles of this marker, measured as the crow flies. 1792 Road Between Bethabara and Germanton (approx. 2.4 miles away); Memorial Industrial School (approx. 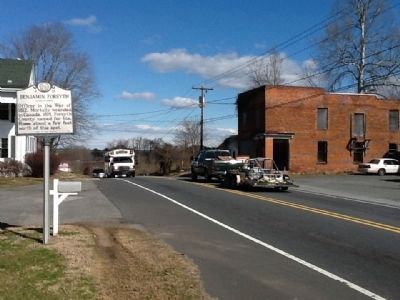 Also see . . .  Wikipedia Entry. “Later in [1813], Forsyth (now a major) and his men took part in the campaign aimed at capturing Montreal, but were not present at the Battle of Crysler’s Farm. Forsyth was promoted to brevet Lieutenant Colonel the following winter. He was active in skirmishing and patrolling north of Lake Champlain in the late spring and summer and was killed in June 1814 in a clash at Odelltown.

“His death made him a hero to the people of North Carolina, who named Forsyth County after him. In addition, the state General Assembly paid for his son’s education through special legislation and gave him a jewelled sword. Forsyth Street on Manhattan’s Lower East Side is also named 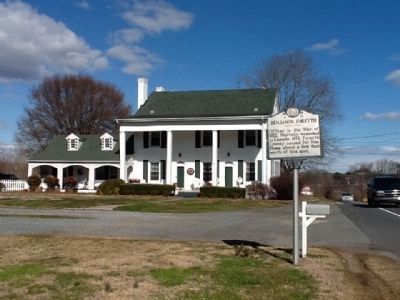 Photographed By Michael C. Wilcox, February 11, 2012
3. Benjamin Forsyth Marker
Though it is "a few feet north" of the marker, it is unclear whether or not the house behind marker was Forsyth's.
for him.” (Submitted on May 5, 2012.)

Additional commentary.
1. About the Rifle Regiment(s) in the War of 1812
Forsyth was commissioned a lieutenant in the U.S. Regiment of Riflemen when it was formed in 1808. At the start of the War of 1812, he was a Captain and Company Commander.

The pre-eminent historian of the U.S. Army in the War of 1812, John C. Fredriksen, paid this tribute in Green Coats and Glory: The United States Regiment of Riflemen, 1808-1821:

“The Regiment of Riflemen was unquestionably the most effective infantry formation fielded by the United States in the War of 1812. ... Accurate weapons, a soaring esprit de corps and inspired leadership ... all resulted in consistently superior performance.”

A synopsis of their exploits can be gleaned from Fredriksen’s entry for the “Regiment of Riflemen,” “The United States Army: A Chronology, 1775 to the Present, 2010, p. 63.” Note To Editor only visible by Contributor and editor 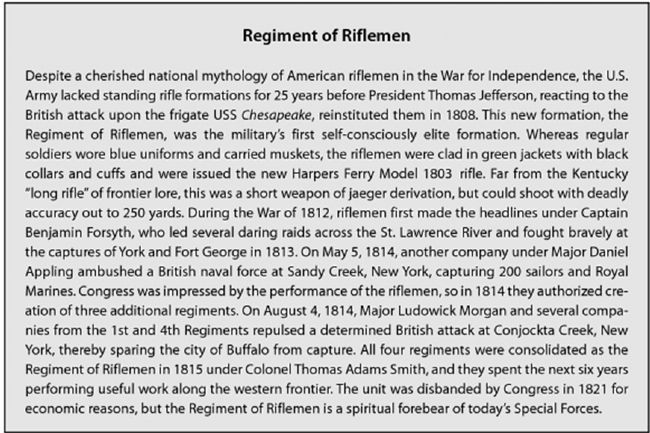