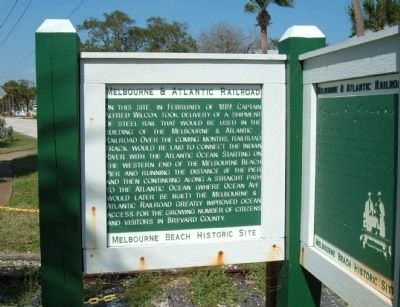 On this site, in February of 1889, Captain Alfred Wilcox took delivery of a shipment of steel rail that would be used in the building of the Melbourne & Atlantic Railroad. Over the coming months, railroad track would be laid to connect the Indian River with the Atlantic Ocean. Starting on the western end of the Melbourne Beach Pier and running the distance of the pier and then continuing along a straight path to the Atlantic Ocean (where Ocean Ave would later be built) the Melbourne & Atlantic Railroad greatly improved ocean access for the growing number of citizens and visitors in Brevard County.

On July 17, 1889 Major Cyrus E. Graves signed the paperwork that laid out the streets of Melbourne Beach and allowed the railroad company "to lay and operate a railroad throughout the center of Ocean Avenue forever unmolested".

Capt. Rufus Beaujean (and later sons Don and Claude) provided for a fee motorized tram rides from the pier to the ocean.

Topics. This historical marker is listed in this topic list: Railroads & Streetcars. A significant historical month for this entry is February 1889. 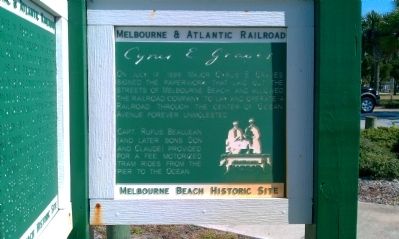 Regarding Melbourne & Atlantic Railroad. In those days, there was a gentleman's reciprocal agreement that railroad owners rode free on each other's lines. Even though the Melbourne & Atlantic was only about a mile long, its owners qualified for free travel on railroads around the country. 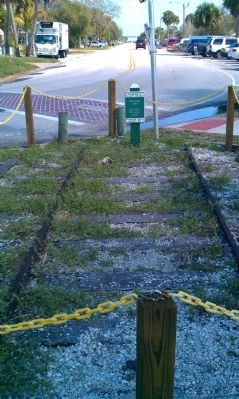