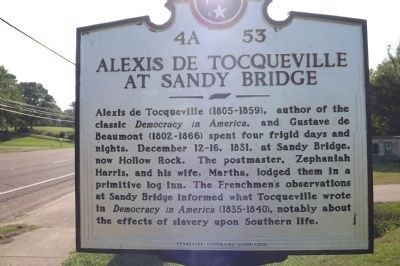 Alexis de Tocqueville (1805-1859), author of the classic Democracy in America, and Gustave de Beaumont (1802-1866) spent four frigid days and nights, December 12-16, 1831 at Sandy Bridge, now Hollow Rock. The postmaster, Zephaniah Harris, and his wife, Martha, lodged them in a primitive log inn. The Frenchmen's observations at Sandy Bridge informed what Tocqueville wrote in Democracy in America (1835-1840), notably about the effects of slavery upon Southern life.

Topics and series. This historical marker is listed in these topic lists: Arts, Letters, Music • Bridges & Viaducts • Communications. In addition, it is included in the Tennessee Historical Commission series list. A significant historical date for this entry is December 12, 1831. 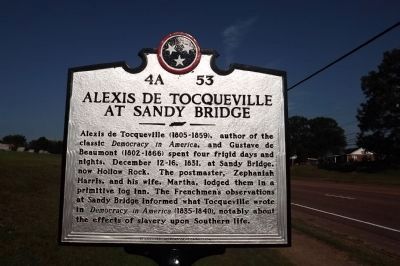