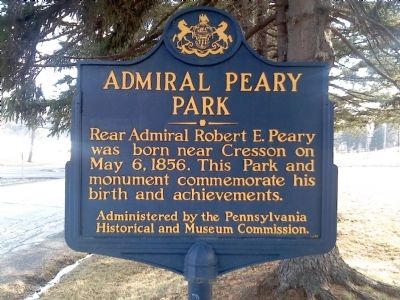 Photographed By Mike Wintermantel, February 17, 2012
1. Admiral Peary Park Marker
Inscription.
Admiral Peary Park. . Rear Admiral Robert E. Peary was born near Cresson on May 6, 1856. This Park and monument commemorate his birth and achievements. . This historical marker was erected in 1948 by Pennsylvania Historical and Museum Commission. It is in Cresson in Cambria County Pennsylvania

Rear Admiral Robert E. Peary was born near Cresson on May 6, 1856. This Park and monument commemorate his birth and achievements.

Topics and series. This historical marker is listed in this topic list: Exploration. In addition, it is included in the Pennsylvania Historical and Museum Commission series list. A significant historical date for this entry is May 6, 1856.

Other nearby markers. At least 8 other markers are within 3 miles of this marker, measured as the crow flies. Robert E. Peary (about 400 feet away, measured in a direct line); Loretto (about 600 feet away); Portage Railroad (approx. 1.4 miles away); Cresson Tuberculosis Sanatorium (approx. 1.8 miles away); Lemon House (approx. 2½ miles away); a 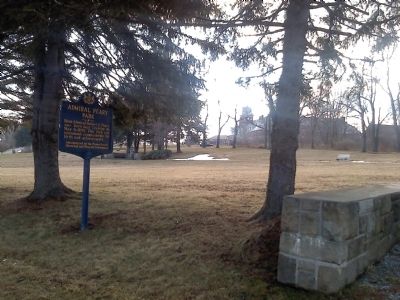 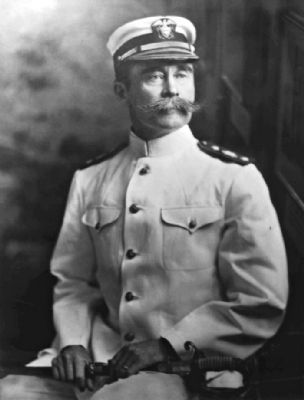 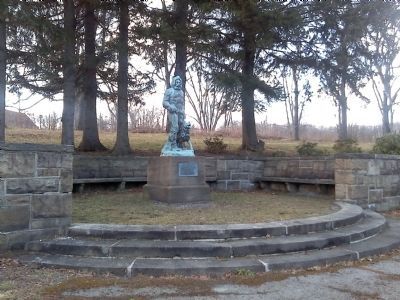 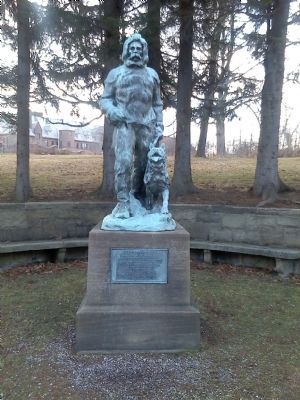 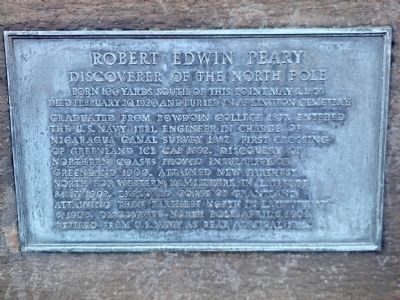 Photographed By Mike Wintermantel, February 17, 2012
6. Admiral Peary Statue plaque
Robert Edwin Peary
Discoverer of the North Pole
Born 100 yards south of this point May 6, 1856
Died February 20, 1920 and buried in Arlington Cemetery.
Graduated from Bowdoin College 1877. entered the U.S. Navy 1881. Engineer in charge of Nicaragua Canal Survey 1887. First crossing of Greenland Ice Cap 1892. Discovery of northern coasts proved insularity of Greenland 1900. Attained new farthest north for western hemisphere in latitude 84°17' 1902. Explored coast of Grantland attaining then farthest north in latitude 37°6' 1906. Discovered North Pole April 6, 1909. Retired from U.S. Navy as Rear Admiral 1911.
Credits. This page was last revised on June 16, 2016. It was originally submitted on February 17, 2012, by Mike Wintermantel of Pittsburgh, Pennsylvania. This page has been viewed 602 times since then and 56 times this year. Photos:   1, 2, 3, 4, 5, 6. submitted on February 17, 2012, by Mike Wintermantel of Pittsburgh, Pennsylvania.
Share this page.