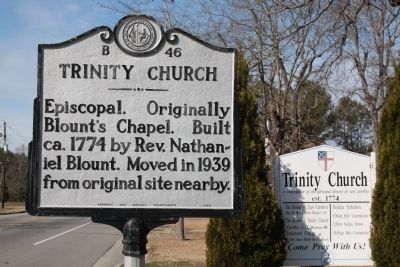 Erected 1968 by Archives and Highway Departments. (Marker Number B-46.)

Topics and series. This historical marker is listed in this topic list: Churches & Religion. In addition, it is included in the North Carolina Division of Archives and History series list. A significant historical year for this entry is 1774. 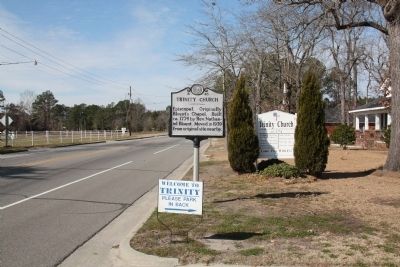 Regarding Trinity Church. From the Wikipedia entry: In 1939, the church building was moved on log rollers drawn by horses from its original location to a plot of land owned by the parish. The parish hall (built ca 1900) already stood on this site, and the church was placed alongside that building. A two story addition was built in 1949 to provide room for Sunday School, offices, a kitchen, and general purpose space. The historic chapel has remained in continuous use since it was built in 1774.

Also see . . .  Wikipedia Entry. “In 1773, Nathaniel Blount sailed from Bath, NC to London, England to be ordained a priest. The Bishop of London ordained Mr. Blount to the priesthood in Saint Paul’s Cathedral, London. Upon his return to Bath, ‘Parson Blount,’ as he was known, had a church built. Giles Shute and John Herrington served as carpenters, according to a signed wooden panel in the sanctuary. The little building became known as Blount’s Chapel.” (Submitted on February 18, 2012.) 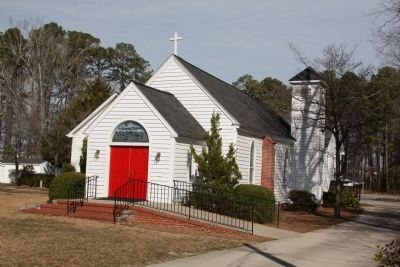