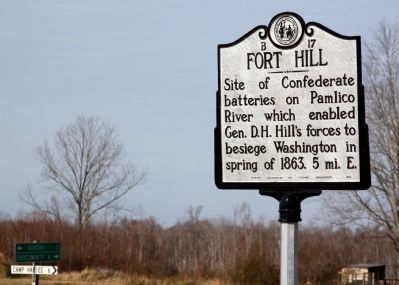 Erected 1952 by Archives, Conservation and Highway Departments. (Marker Number B-17.) 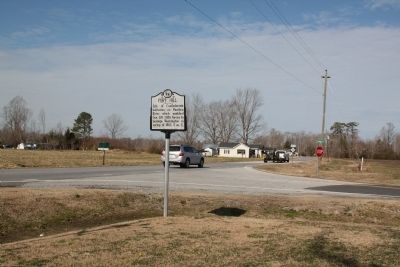 By J. J. Prats, February 4, 2012
2. Fort Hill Marker
North Carolina Fifty-Second Regiment at Washington, N.C. from John H. Robinson's North Carolina Troops 1861-1865. published in 1901. “On the 18th [of March, 1963,] we were again on the march and arrived at Tranter's Creek, about eight miles from Washington, on the 19th, remaining here for a day or two we returned to our camp near Greenville on or about the 23d. Resting there, we received orders on the 28th to be ready to move in one hour. Marching on this day, we reached a point on the Pamlico river, seven miles below the town of Washington, on Sunday, March 29th. Here we erected a heavy earthwork on a bluff on the river bank and called it Fort Hill in honor of General D.H. Hill, who commanded the expedition. The Federal troops occupying the town of Washington were reported to be running short of both ammunition and rations, and Fort Hill was erected for the purpose of commanding the river and preventing communication between the transports and gunboats in the river below and the garrison of the town. Our battery was composed of guns of light calibre, all field pieces and not able to cope with the gunboats in the river below, which gave the fort heavy shellings each day. They were suspicious of us, however, for occasionally two Whitworth guns would be sent down from the battery near the town, and while they were in battery, we would open on them at long range, and on several occasions inflicted considerable damage. When these guns were withdrawn, the gunboats would approach quite near and open on the fort without eliciting any reply. This puzzled them, and they were timid and would not venture the passage of the fort.” (Submitted on February 19, 2012.)
Credits. This page was last revised on June 16, 2016. It was originally submitted on February 19, 2012, by J. J. Prats of Powell, Ohio. This page has been viewed 575 times since then and 34 times this year. Photos:   1, 2. submitted on February 19, 2012, by J. J. Prats of Powell, Ohio.

Editor’s want-list for this marker. Photos of remains of batteries riverside. • Can you help?
Share This Page.