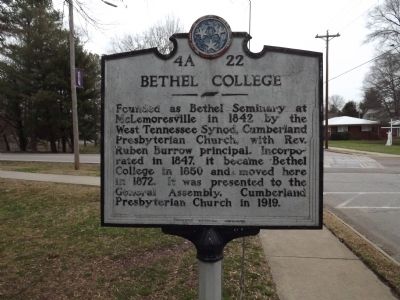 Photographed By Ken Smith, February 18, 2012
1. Bethel College Marker
Inscription.
Bethel College. . Founded as Bethel Seminary at McLemoresville in 1842 by the West Tennessee Synod, Cumberland Presbyterian Church, with Rev. Ruben Burrow principal. Incorporated in 1847, it became Bethel College in 1850 and moved here in 1872. It was presented to the General Assembly, Cumberland Presbyterian Church in 1919. . This historical marker was erected by Tennessee Historical Commission. It is in McKenzie in Carroll County Tennessee

Topics and series. This historical marker is listed in these topic lists: Churches & Religion • Education. In addition, it is included in the Tennessee Historical Commission series list. A significant historical year for this entry is 1842.

Location. 36° 8.204′ N, 88° 30.99′ W. Marker is in McKenzie, Tennessee, in Carroll County. Marker is at the intersection of Cherry Avenue and College Drive, on the right when traveling west on Cherry Avenue. Touch for map. Marker is at or near this postal address: 325 Cherry Ave, Mc Kenzie TN 38201, United States of America. Touch for directions.

Other nearby markers. At least 8 other markers are within 9 miles of this marker, measured as the crow flies. James Monroe McKenzie (approx. 0.3 miles away); McKenzie's Station (approx. 0.4 miles away); Harris-Collier-Holland Farm 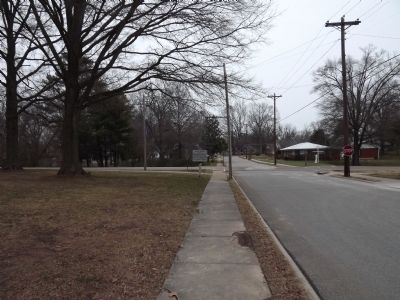 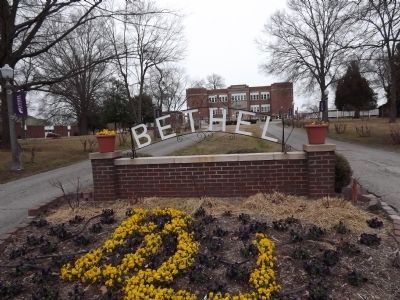