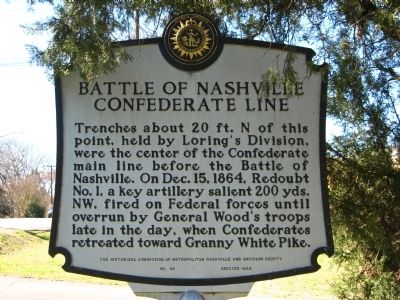 Trenches about 20 ft. N of this point, held by Loring's Division, were the center of the Confederate main line before the Battle of Nashville. On Dec. 15, 1864, Redoubt No. 1, a key artillery salient 200 yds. NW, fired on Federal forces until overrun by General Wood's troops late in the day, when Confederates retreated toward Granny White Pike.

Erected 1992 by The Historical Commission of Metropolitan Nashville and Davidson County. (Marker Number 89.)

Topics and series. This historical marker is listed in this topic list: War, US Civil. In addition, it is included in the Tennessee, The Historical Commission of Metropolitan Nashville and Davidson County series list. A significant historical date for this entry is December 15, 1864.

Location. 36° 6.818′ N, 86° 48.355′ W. Marker is in Nashville, Tennessee, in Davidson County. Marker is at the intersection of Woodmont Boulevard and Hopkins Street, on the right when traveling west on Woodmont Boulevard. Located in front of the First Unitarian Universalist Church right beside the drive in for their parking lot. Touch for map. Marker is in this post office area: Nashville TN 37215, United States of America. Touch for directions. 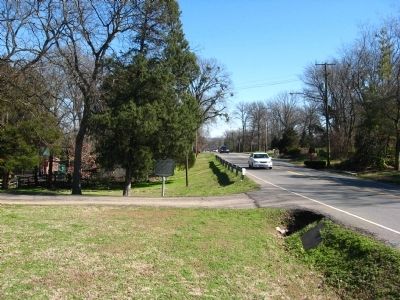