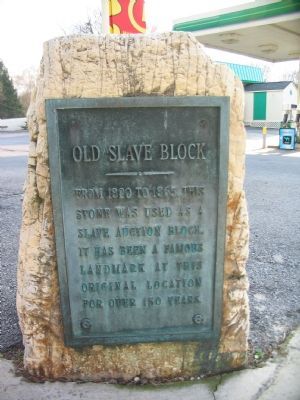 By Craig Swain, February 9, 2008
1. Old Slave Block Marker
Inscription.
Old Slave Block. . From 1800 to 1865 this stone was used as a slave auction block. It has been a famous landmark at this original location for over 150 years. . This historical marker is in Sharpsburg in Washington County Maryland

From 1800 to 1865 this stone was used as a slave auction block. It has been a famous landmark at this original location for over 150 years.

Topics. This historical marker is listed in these topic lists: African Americans • Industry & Commerce. A significant historical year for this entry is 1800. 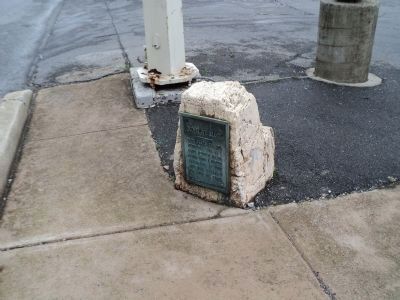 Additional commentary.
1. Interesting Historical Connection
The slave auction block stands just a few hundred yards from the Antietam National Cemetery. The lasting impact of the battle fought at Antietam on September 17, 1862 was the Emancipation Proclamation issued by President Lincoln on September 22. Lincoln felt he could not issue such an executive order abolishing slavery, even if only applying to the seceded states, without some signal victory on the battlefield. The Battle of Antietam, recorded as the bloodiest day in American History, was the event Lincoln needed. While not immediately applying to the border states, which included Maryland, the proclamation paved the way for the 13th Amendment. Thus in some ways the great battle that occurred around this stone ensure it would never be used as an auction block for people held in bondage.
— Submitted February 10, 2008, by Craig Swain of Leesburg, Virginia. 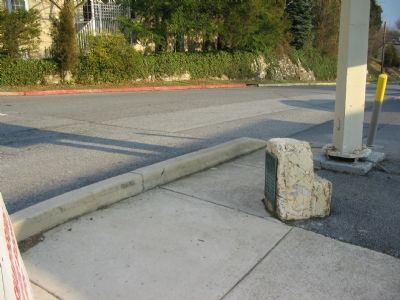