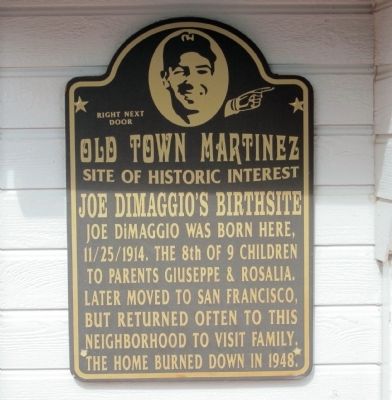 By Andrew Ruppenstein, February 26, 2012
1. Joe DiMaggio's Birthsite Marker
Inscription.
Joe DiMaggio's Birthsite. Old Town Martinez - Site of Historic Interest. Joe DiMaggio was born here 11/25/1914. The 8th of 9 children to parents Giuseppe and Rosalia. Later moved to San Francisco, but returned often to this neighborhood to visit family. The home burned down in 1948. . This historical marker is in Martinez in Contra Costa County California

Joe DiMaggio was born here 11/25/1914. The 8th of 9 children to parents Giuseppe and Rosalia. Later moved to San Francisco, but returned often to this neighborhood to visit family. The home burned down in 1948. 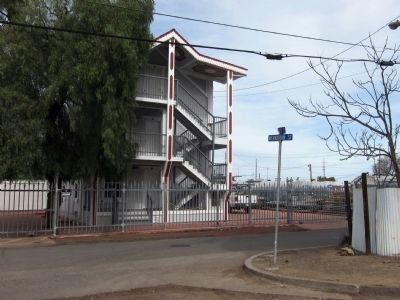 By Andrew Ruppenstein, February 26, 2012
2. Joe DiMaggio's Birthsite Marker - wide view
The marker is mounted to the right front corner of the building, but is difficult to see since it sits underneath an overhang and is obscured by the fence. Regardless, the house to which the marker is affixed is not DiMaggio's birthsite - that is the adjacent lot.
The National Baseball and Hall of Fame's biography of Joe DiMaggio, "Joe DiMaggio is remembered as one of the game's most graceful athletes -- a picture player both at bat and in center field. Many rate his 56 consecutive-game hitting streak in 1941 as the top baseball feat of all time. The Yankee Clipper used an unusually wide stance in winning two batting championships and three MVP Awards. In 13 seasons, he amassed 361 homers, averaged 118 RBIs annually and compiled a .325 lifetime batting mark. At baseball's 1969 centennial celebration, he was named the game's greatest living player...." (Submitted on February 27, 2012.) 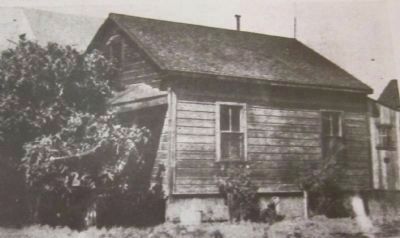 By Unknown, October 1948
3. Joe DiMaggio's Birthplace - 1948
"This was the house, as it appeared in October, 1948, where one of the greatest baseball players of all-time was born, Joe DiMaggio. It was moved to this site at 237 Foster St. after originally being located at fisherman's wharf by Joe DiMaggio, Sr. When the DiMaggio family moved to San Francisco, the property was sold to Annie Flores of Pittsburg who later sold it to Agostino and Frances Lucido." - photo caption. (Image provided courtesy of the Martinez Museum.) 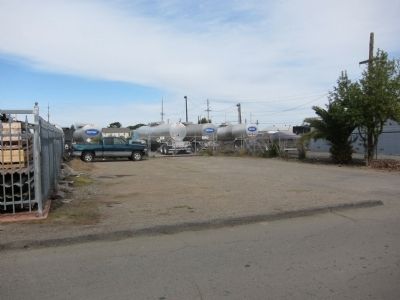