Furman Men Who Gave Their Lives in the World War 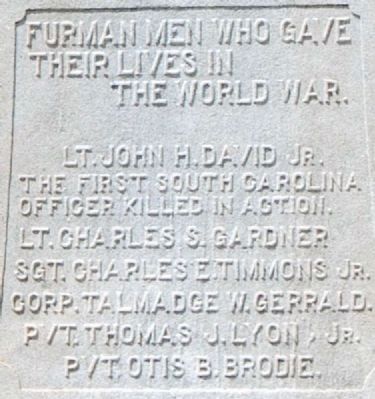 Topics and series. This historical marker is listed in this topic list: War, World I. In addition, it is included in the Spirit of the American Doughboy - E. M. Viquesney series list.

Location. 34° 55.25′ N, 82° 26.333′ W. Marker is in Greenville, South Carolina, in Greenville County. Marker is on Cherrydale Avenue, on the right when traveling north. Monument is located in Childers Plaza on the campus of Furman University. Touch for map. Marker is in this post office area: Greenville SC 29617, United States of America. Touch for directions. 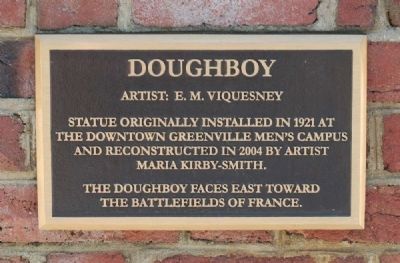 Statue originally installed in 1921 at
the downtown Greenville Men's Campus
and reconstructed in 2004 by artist
Maria Kirby-Smith.

The Doughboy faces east toward
the battlefields of France.

Also see . . .
1. E.M. Viquesney. Ernest Moore Viquesney (August 5, 1876 - October 4, 1946) American sculptor best known for his very popular World War I monument Spirit of the American Doughboy, installed in front of many American city halls and courthouses and in public parks and cemeteries in the years 1920 through 1940. (Submitted on April 26, 2009, by Brian Scott of Anderson, South Carolina.)

2. Doughboy scheduled for refurbishing. Across the lake from the bell tower is a little known FU landmark: the doughboy statue. (Submitted on April 26, 2009, by Brian Scott of Anderson, South Carolina.)

Additional commentary.
1. About the Doughboy 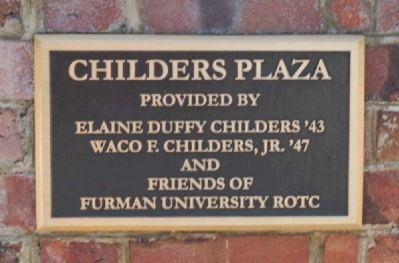 Photographed By Brian Scott
3. Childers Plaza Plaque
Provided by
Elain Duffy Childres '43
Waco F. Childers, Jr., '47
and
Friends of
Furman University ROTC
In 1921, three years after the Armistice was signed, Furman and Greenville paid tribute to the university's World War I veterans in a moving ceremony that unveiled a memorial statue of a doughboy. The copper soldier was one of numerous similar statues erected across the country to honor veterans of World War I. The Doughboy depicts a soldier rushing into battle, wielding a grenade in one hand and a rifle in the other.

The term doughboy was used by European soldiers to describe their American allies. The U.S. troops arrived in France from a training base in Texas hat was known for its white adobe soil. The soil often discolored their uniforms, giving them a "doughboy" appearance.

When the Furman Doughboy was first dedicated, hundreds of area residents turned out at the old campus in downtown Greenville. A bugler played taps as Mrs. T.J. Lyons, the mother of a Furman student who died in France during the war, gently loosened the fastening of the American flag that shrouded the statue.

An article in the July 1921 issue of the Furman Bulletin reported that the 'handsome statue with splashes of molten gold and the youthful figure of an American Doughboy in France, preserved in lasting metal and stone, stood revealed to the eyes of the expectant throng." When the statue was uncovered, "applause broke forth. Tears filled the eyes of beholders 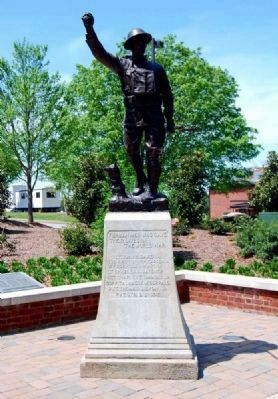 Photographed By Brian Scott, April 25, 2009
4. Sprit of the American Doughboy
The base's rear reads: "More than 500 Furman men served in the World War."
and ex-service men wept as they saw the figure, so life-like, emerge."

Five hundred and forty Furman men, almost the entire student body of the then all-male college, volunteered for service during the Great War. Sox of them died during the war -- Pvt. Thomas J. Lyons Jr., Pvt. Otis Brodie, Lt. John H. David (the first South Carolina officer killed in action), Lt. Charles S. Gardner (who, though seriously wounded, refused to be removed from the battle), Sgt. Charles E. Timmons Jr. (who "went to death beyond the call of duty, while aiding men from another company"), and Cpl. Talmadge W. Gerrald (who gave his life trying to save a wounded comrade). Their names are inscribed at the base of the Doughboy.

Since that dedication day, the Furman Doughboy has become one of the university's most enduring landmarks. When Furman moved to its current location, so did the Doughboy. It was erected near the south end of the lake in 1957 and is one of the few surviving remnants of the old campus.

Over the last forty years, the Doughboy has lost its luster. The weather has taken its toll, and on two occasions it has been vandalized by Citadel cadets. So a few months ago, the Doughboy was removed from its concrete pedestal and transported to Jeff Monnick's studio in Columbia. Monnick, the chief conservator of the South Carolina State Museum, spent three months cleaning 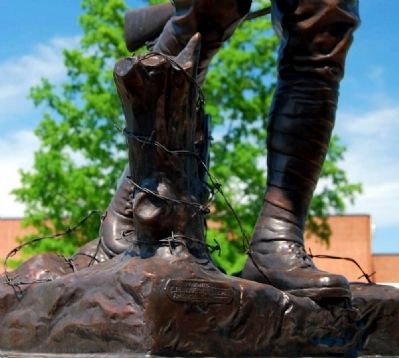 This Veterans Day (2002), Furman University will honor the forty-two million people who served in the military since the Revolutionary War and also celebrate the return of the Doughboy. It will remember those who gave what Abraham Lincoln called "the last full measure of devotion" in the nation's hour of need. (Source: The Bell Tower and Beyond: Reflections on Learning and Living by David Emory Shi, 2002, pgs 44-46.)
— Submitted April 26, 2009, by Brian Scott of Anderson, South Carolina. 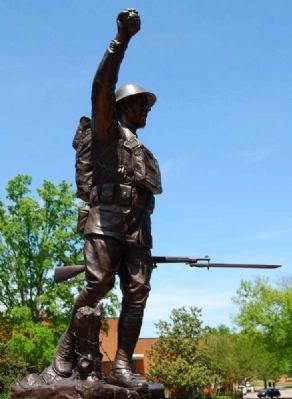