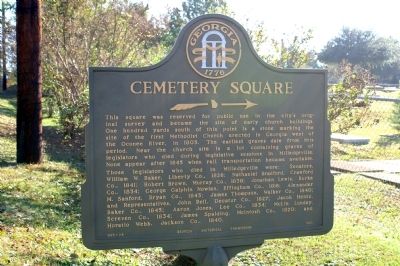 Topics and series. This historical marker is listed in this topic list: Cemeteries & Burial Sites. In addition, it is included in the Georgia Historical Society series list.

Other nearby markers. At least 8 other markers are within walking distance of this marker. Memory Hill Cemetery (within shouting distance of this marker); The Methodist Church (about 600 feet away, measured in a direct line); Rear Admiral John W. Wilcox (about 600 feet away); The Unknown Soldiers of Brown Hospital (about 600 feet away); Carl Vinson • Mary Green Vinson (about 600 feet away); Tomlinson Fort House (approx. ¼ mile away); St. Stephen's Episcopal Church (approx. ¼ mile away); The Old Governor's Mansion (approx. ¼ mile away). Touch for a list and map of all markers in Milledgeville.
Credits. This page was last revised on June 16, 2016. It was originally submitted on February 29, 2012, by Charles Smith of Milledgeville, Baldwin Georgia. This page has been viewed 572 times since then and 8 times this year. Photo   1. submitted on February 29, 2012, by Charles Smith of Milledgeville, Baldwin Georgia. • Craig Swain was the editor who published this page.