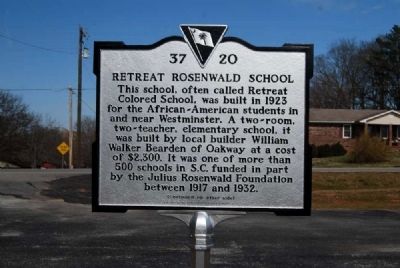 Photographed By Brian Scott, February 28, 2012
1. Retreat Rosenwald School Marker
Front
Inscription.
Retreat Rosenwald School. . , [Front]: , This school, often called Retreat Colored School, was built in 1923 for the African-American students in and near Westminster. A two-room, two-teacher, elementary school, it was built by local builder William Walker Bearden of Oakway at a cost of $2,300. It was one of more than 500 schools in S.C. funded in part by the Julius Rosenwald Foundation between 1917 and 1932. , [Reverse]; , This public school replaced a one-room private school established by Pleasant Hill Baptist Church about 1870. About 50-60 students a year, in grades 1-7, attended Retreat Colored School from 1923 until it closed after the 1949-50 school year. The school was sold to Pleasant Hill Baptist Church in 1950. It was listed in the National Register of Historic Places in 2011. . This historical marker was erected in 2012 by Pleasant Hill Baptist Church. It is in Westminster in Oconee County South Carolina

[Front]:
This school, often called Retreat Colored School, was built in 1923 for the African-American students in and near Westminster. A two-room, two-teacher, elementary school, it was built by local builder William Walker Bearden of Oakway at a cost of $2,300. It was one of more than 500 schools in S.C. funded in part by the Julius Rosenwald Foundation between 1917 and 1932.

[Reverse];
This public school replaced a one-room private school established by Pleasant Hill Baptist Church about 1870. About 50-60 students a year, in grades 1-7, attended Retreat Colored School from 1923 until it closed after the 1949-50 school year. The school was sold to Pleasant Hill Baptist Church in 1950. It was listed in the National Register of Historic Places in 2011.

Topics and series. This historical marker is listed in these topic lists: African Americans • Education. In addition, it is included in the Rosenwald Schools series list. A significant historical year for this entry is 1923. 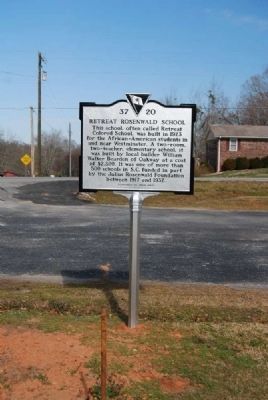 Also see . . .
1. Retreat Rosenwald School. The Retreat Rosenwald School, built in 1924, is significant for its association with African American public education during the first half of the twentieth century and as an extant example of an architectural design typically associated with the schools funded in part by Julius Rosenwald. (Submitted on March 5, 2012, by Brian Scott of Anderson, South Carolina.) 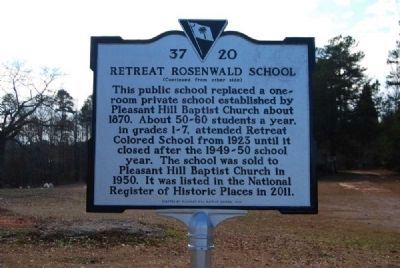 Photographed By Brian Scott, February 28, 2012
3. Retreat Rosenwald School Marker
Reverse
shops, and teachers' homes in the United States which were built primarily for the education of African-Americans in the early 20th century. (Submitted on March 5, 2012, by Brian Scott of Anderson, South Carolina.)

Additional commentary.
1. Retreat Rosenwald School - National Register Nomination Form (2011)
Summary Paragraph
The Retreat Rosenwald School is a two-room building located at 150 Pleasant Hill Circle approximately one
and one-half miles east of Westminster, South Carolina. The school is situated on 2.55 acres of land owned by Pleasant Hill Baptist Church. The building was completed in 1924 for a total cost of $2,300, including $700 from the Julius Rosenwald Fund. The local builder 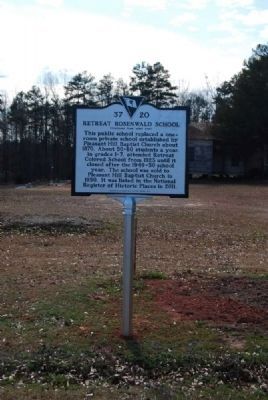 Photographed By Brian Scott, February 28, 2012
4. Retreat Rosenwald School Marker
Reverse
was William Walker Bearden of Oakway, South Carolina. It was one of ten Rosenwald Schools built in Oconee County; the only other one extant is in Seneca. The building is oriented northwest to southeast and lateral to the road. Its surroundings presently include the Pleasant Hill Baptist Church, Pleasant Hill Cemetery, woods, and farmland. The school was built on an open field; however, the Pleasant Hill Cemetery now (2011) includes some of the original open land to the rear of the building. The school served the African American community in the Westminster area from 1924 until 1950, when the Retreat Rosenwald School was closed because student enrollment had decreased significantly.

Narrative Description
Exterior
The Retreat Rosenwald School is a one-story, wood frame building with a brick pier foundation, white weatherboard siding, and a metal roof. It is T-shaped with entrances on either side of the forward wing. Each has a small-engaged porch which opens into a classroom. The chimney is centrally located. The original panel configuration consisted of two sets of six windows on the southwest side of the building, but these have been removed or covered. Several of these windows are stored under the building; other windows are boarded up to prevent vandalism. The windows located on the northeastern side are located in the kitchen at the two cloakrooms. 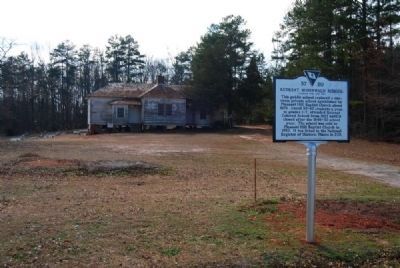 The school is situated with a northwest to southeast orientation. This deviates somewhat from the specifications laid out by Samuel L. Smith’s Community School Plans for Rosenwald Schools, which calls for a north-south orientation. The school’s orientation is parallel to the road, however, and the southwest orientation of the large windows would increase the amount of sunlight in the winter and decrease it in the summer.

Interior
The floor plan is typical of a two-teacher community school—floor plan number 20-A—recommended in Bulletin No. 3 by the Julius Rosenwald Fund. Each of the building’s interior doorways has transoms to increase the amount of available natural light and air circulation. The moldings throughout the building are plain with no enhancing accents. Much of the original flooring is evident throughout the building. The lower portions of the interior walls are painted brown which gives the appearance of wainscoting approximately four feet above the floor. Above the simulated wainscoting there is horizontal tongue and groove wood sheathing that is painted white. The ceilings also consist white tongue and 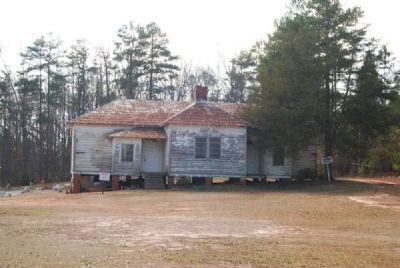 The building has three main rooms consisting of two classrooms and an industrial room in the forward projecting wing. The two classrooms were separated by a detachable dividing wall. The removal of the dividing wall created a large space for special events. The northwestern classroom served younger students while the southeastern room served older students. Each classroom had a connected cloakroom for the storage of students’ coats, lunches, and other school materials. A kitchen was located on the northern side of the building. There is a wood stove that was used for heating and cooking.

Integrity
The Retreat Rosenwald School, an intact example of Two Teacher School Plan 20-A, meets the Registration Requirements as established in the Multiple Property Submission “The Rosenwald School Building Program in South Carolina, 1917-1932,” approved by the National Park Service in 2008.

Though the school has undergone exterior alterations, the building retains a satisfactory degree of historic integrity sufficient to convey its historic architectural character. The windows on the southwestern elevation originally consisted of two gangs of six windows. Both gangs of windows have been replaced or covered. The overall form of the building has not been altered so as to no longer convey its historic appearance 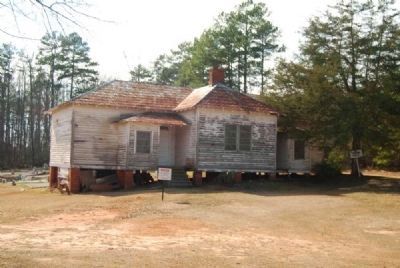 Photographed By Brian Scott, February 28, 2012
7. Retreat Rosenwald School
as an early twentieth century schoolhouse. Likewise, its rural setting and proximity to a church is typical for a Rosenwald School. The interior retains a high degree of integrity. The building contains the original floor, doors, and storage spaces. Several pieces of original furniture such as desks, stoves, cabinets, and drawers remain in the school. These elements help to convey the historic appearance of a Rosenwald school.

Statement of Significance Summary Paragraph
The Retreat Rosenwald School in the vicinity of Westminster, South Carolina, was built in 1924 to serve the local black community. It is eligible for listing in the National Register of Historic Places under Criterion A for its association with African American public education and ethnic heritage during the first half of the twentieth century. It is also eligible under Criterion C as an extant example of an architectural design typically associated with the schools funded in part by Julius Rosenwald. The Julius Rosenwald Fund sought to improve schools for African Americans in the rural South. The multiple property submission for the Rosenwald School Building Program, 1917-1932, states that Rosenwald schools are eligible under Criterion A (Education and Ethnic Heritage – African American) and Criterion C (Architecture). In addition to their architectural significance, extant Rosenwald 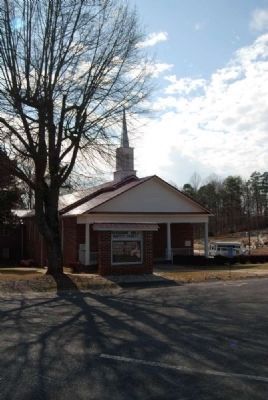 Photographed By Brian Scott, February 28, 2012
8. Pleasant Hill Baptist Church
Schools reflect the struggle of black communities to give their children better educational opportunities. Rosenwald schools also reflect the strong bonds of community: the public space became an important social center for rural blacks. The Retreat Rosenwald School, operating from 1924 to 1950, conveys all of these aspects of its history. It is significant at the local level for architecture, its association with the educational reform, and its historical importance in the local black community.[1]

Narrative Statement of Significance
Education
Rosenwald schools were one of the most significant movements in African American education in the first half of the twentieth century.[2] Education for African Americans during this time was anything but equal, and the educational opportunities for African Americans were inadequate. A great disparity existed between funding for black and white schools. The number of black and white students was nearly equal in 1922, but the state spent $1,970,944.20 on white schools and only $187,033.63 on black schools. Likewise, South Carolina spent $188,155.02 on furniture and repairs for white schools but only $22,983.00 for black schools. White students received nearly ninety percent of the state funds.[3] That South Carolina had the second lowest literacy rate in the country suggests the severity of education problems 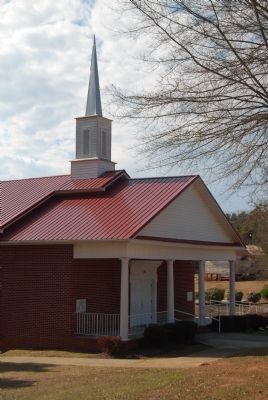 Frequently, the county superintendent does not know where they [the Negro schools] are located and sometimes the district board cannot tell where the Negro school is taught. It is customary for the board to allot a certain amount of money to the Negroes and allow them to use it as they please. A teacher is employed and no further questions are asked, except concerning enrollment at the end of the session.[5]

The county distribution of funds at the local level in South Carolina, as well as any instructional oversight, was highly uneven between blacks and whites.

The Julius Rosenwald Fund had a profoundly positive impact upon education in South Carolina, especially during the 1920s at the height of the program. The addition or replacement of educational facilities brought about a marked change in the amount of funding per student for black children in South Carolina. In 1917, the year the Rosenwald Fund was established, the yearly average instructional cost per black student was $2.86. Ten years later, that figure had increased to $11.06. Likewise, the number of available black teachers increased from 3,100 in 1917 to 4,300 in 1927 to meet the needs of the new schools.[6] As one of nearly 5,000 Rosenwald schools constructed in the South, and one of almost 500 constructed 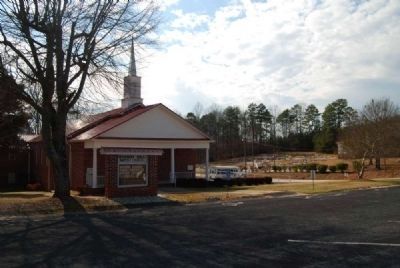 Architecture
The architectural style of the Retreat Rosenwald School reflects an important movement in schoolhouse design and construction. The Rosenwald schools in South Carolina are divided into two subtypes: Subtype 1 includes buildings constructed between 1917 and 1920; and Subtype 2 comprises school buildings built between 1920 and 1932.

The Retreat Rosenwald School is an example of Subtype 2. These school buildings reflected the designs and specifications of Samuel L. Smith and were built under the supervision of the Rosenwald Southern office in Nashville, Tennessee.[7] Rosenwald schools were designed with two primary functions in mind: facilitating education and providing important public space for rural communities. Smith’s Community School Plans stressed particular designs and guidelines in school building construction. The Retreat Rosenwald School was built according to a typical design found in South Carolina—Samuel Smith’s Plan Number 20-A.[8]

There are approximately thirty-five extant Rosenwald schools in South Carolina; six of them have already been listed in the National Register of Historic Places:[9]