Site of the Home of Dr. George Moffit Patrick 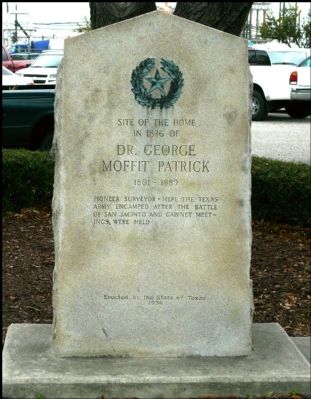 Site of the home
in 1836 of
Dr. George
Moffit Patrick
1801-1889
Pioneer surveyor • Here the Texas
Army encamped after the Battle
of San Jacinto and cabinet meet-
ings were held

Topics and series. This historical marker is listed in these topic lists: Exploration • War, Texas Independence. In addition, it is included in the Texas 1936 Centennial Markers and Monuments series list. A significant historical year for this entry is 1836.

Location. 29° 41.93′ N, 95° 7.439′ W. Marker is in Deer Park, Texas, in Harris County. Marker can be reached from the intersection of Center Street and West Helgera, on the left when traveling north. Touch for map. Marker is in this post office area: Deer Park TX 77536, United States of America. Touch for directions.

Other nearby markers. At least 8 other markers are within 4 miles of this marker, measured as the crow flies. Deer Park (within shouting distance of this marker); Pratt Truss Bridge (approx. 0.8 miles away); Battle of San Jacinto (approx. 2.3 miles away); The Texas Army Attacked in Four Divisions 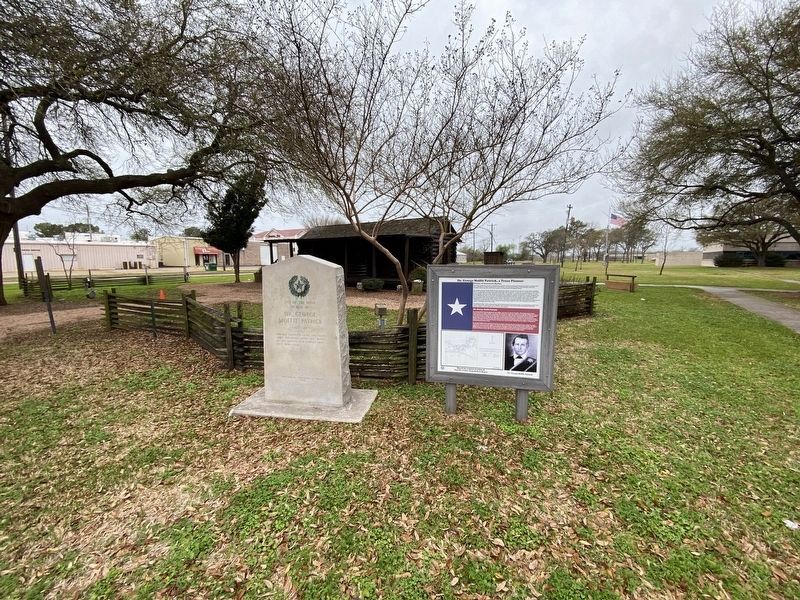 By Brian Anderson, March 14, 2021
2. Site of the Home of Dr. George Moffit Patrick Marker
Marker in its new location near the Deer Park municipal building.

Regarding Site of the Home of Dr. George Moffit Patrick.
Text of Nearby Storyboard:

The original 1936 Dr. George Moffit Patrick Centennial Marker was placed near the site of his cabin on Buffalo Bayou. In 1948, Rohm and Haas, Texas built their plant and the marker was moved to a nearby site. In the 1970’s, it was reported that the marker had been moved again. The marker was then crated and placed in storage. Sometime after, the marker was cleaned and placed on their property for the re-dedication in 1984. In 2009, Dow Chemical purchased Rohm and Haas. In 2016, Dow Chemical contacted the City of Deer Park and asked if the city would be interested in having the marker 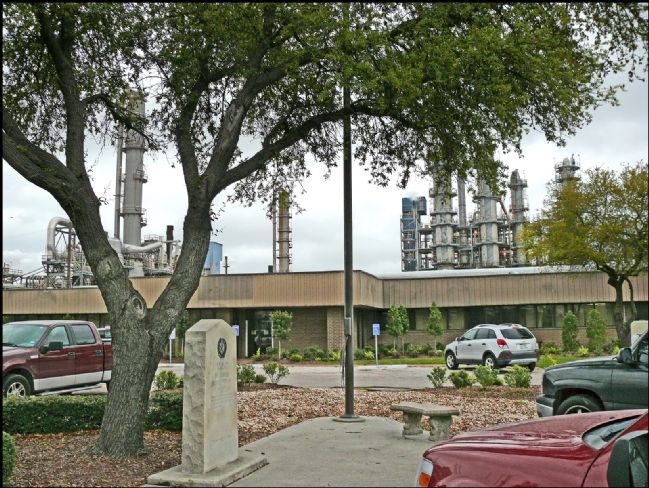 By Jim Evans, March 8, 2012
3. Site of the Home of Dr. George Moffit Patrick Marker
Marker in its former location.
placed near the historic representation of Dr. George Moffit Patrick’s Cabin. The marker was not accessible to the public at Dow Chemical due to safety and security reasons. The city asked for permission from the Texas Historical Commission to move the marker. On March 7, 2017, consent was given, and on April 27, 2017, Dow Chemical moved the marker to Heritage Park in Deer Park.

The dedicated effort of Dow Chemical moving this 5,000 pound centennial marker was challenging and the City of Deer Park greatly appreciated their diligence and attention to detail. Deer Park is honored to have this marker, which is such an important part of our early history.

Dr. George Moffit Patrick, physician and soldier, was born in 1801 in Virginia. He immigrated to Texas between 1827 and 1828. Patrick was among the volunteers under the command of Captain William B. Travis who captured the Mexican fort and garrison at Anahuac in 1835. Patrick represented Liberty Municipality in the Consultation of 1835, and on November 13, signed the articles that established the provisional government of Texas. On March 25, 1836, the council appointed Patrick to organize the Harrisburg County Militia and instructed him to order two-thirds of the troops immediately into active duty. At great personal expense and effort, he mustered twenty recruits 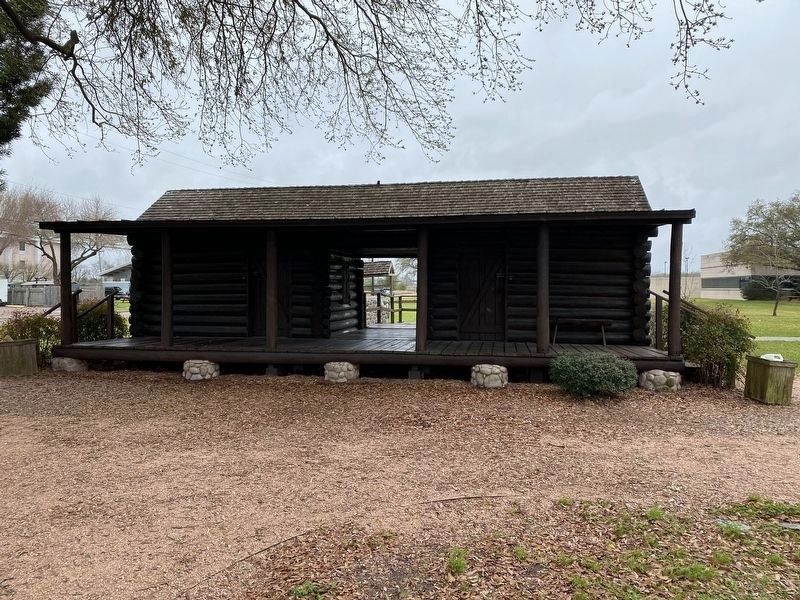 Dr. George Moffit Patrick purchased land in the 1830's. This became the Patrick Survey, which was most well-known and covered the largest area that became Deer Park. After the Battle of San Jacinto, the Texas cabinet met and drafted the initial treaty papers at Patrick's cabin, which was located on the banks of Buffalo Bayou in present day Deer Park. Dr. George Moffit Patrick died in Grimes County in 1889. His remains and those of his wife were later moved to the State Cemetery in Austin, Texas. 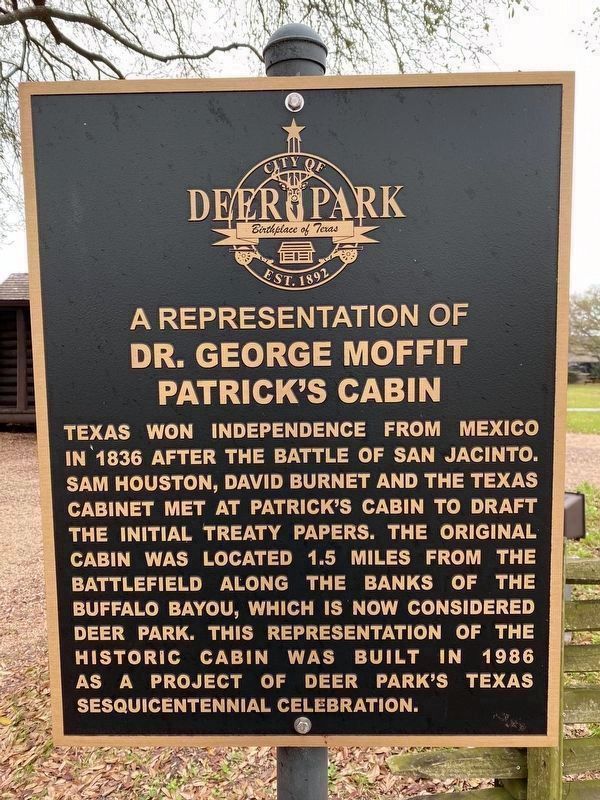 By Brian Anderson, March 14, 2021
5. A Representation of Dr. George Moffit Patrick's Cabin
Texas won independence from Mexico in 1836 after the Battle of San Jacinto. Sam Houston, David Burnet and the Texas cabinet met at Patrick's cabin to draft the initial treaty papers. The original cabin was located 1.5 miles from the battlefield along the banks of the Buffalo Bayou. This representation of the historic cabin was built in 1986 as a project of Deer Park's Texas Sesquicentennial celebration. 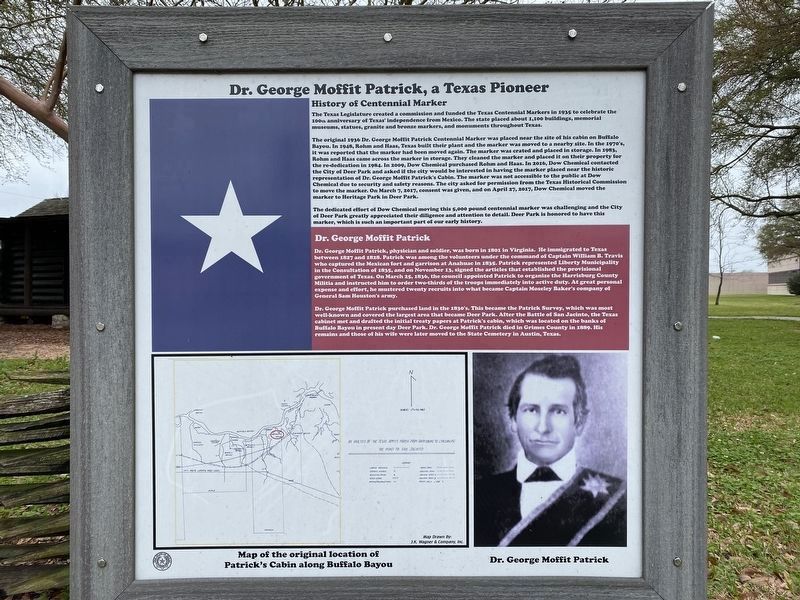