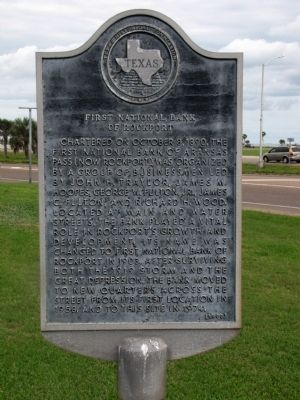 Chartered on October 8, 1890, the First National Bank of Aransas Pass (now Rockport) was organized by a group of businessmen led by John H. Traylor, James M. Hoopes, George W. Fulton, Jr., James C. Fulton, and Richard H. Wood. Located at Main and Water Streets, the bank played a vital role in Rockport’s growth and development. Its name was changed to First National Bank of Rockport in 1903. After surviving both the 1919 storm and the Great Depression, the bank moved to new quarters across the street from its first location in 1958, and to this site in 1974.

Topics. This historical marker is listed in this topic list: Industry & Commerce. A significant historical month for this entry is October 1878.

Location. 28° 1.662′ N, 97° 2.971′ W. Marker is in Rockport, Texas, in Aransas County. Marker can be reached from East Liberty Street (Business State Highway 35) east of North Austin Street, on the left when traveling east. Located in the east parking lot of Wells Fargo Bank. Touch for map. Marker is 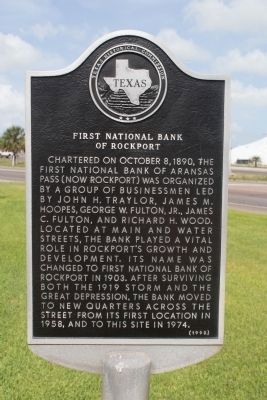 Click or scan to see
this page online
at or near this postal address: 502 N Austin St, Rockport TX 78382, United States of America. Touch for directions. 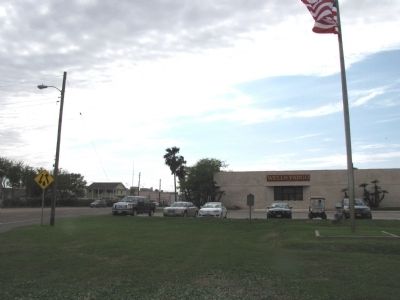