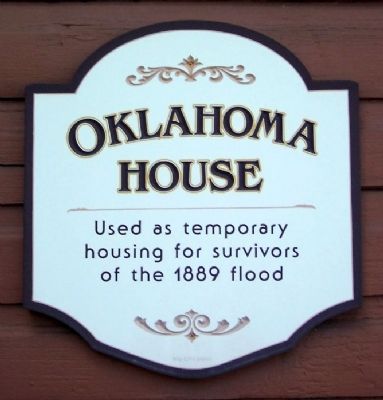 Used as temporary housing for survivors of the 1889 flood

Topics. This historical marker is listed in these topic lists: Charity & Public Work • Disasters • Man-Made Features. A significant historical year for this entry is 1889.

Location. 40° 19.675′ N, 78° 55.247′ W. Marker is in Johnstown, Pennsylvania, in Cambria County. Marker is at the intersection of Walnut Street and Washington Street, on the left when traveling south on Walnut Street. Marker and house are on the grounds of the Johnstown Flood Museum. Touch for map. Marker is at or near this postal address: 304 Washington Street, Johnstown PA 15901, United States of America. Touch for directions. 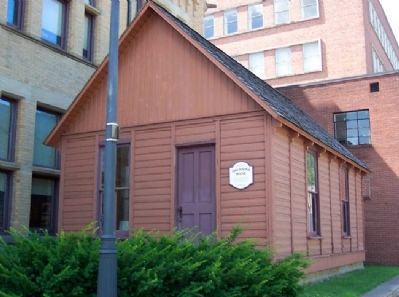 Additional commentary.
1. Text of Information Sign, Picture 5.
"A family living in the Oklahoma house around 1900. The house, located on an alley in the Moxham neighborhood, as it loked just before it was moved to the Flood Museum. In the days that followed the 1889 Flood, survivors sought shelter in any structure for miles around. Some fashioned crude tents from blankets or built lean-tos of doors and planks dragged from the wreckage. Among the first temporary houses erected to meet this need were some 310 "Oklahoma Houses" that were distributed by the Housing Distribution Committee of the Johnstown Flood Finance Committee. Originally manufactured for homesteaders in the Oklahoma Territory, these Oklahoma houses were a very early example of prefabricated housing that was manufactured in Chicago. Hughes & Hoover Co. of Huntington, Pennsylvania erected the Oklahoma houses in Johnstown during July and August 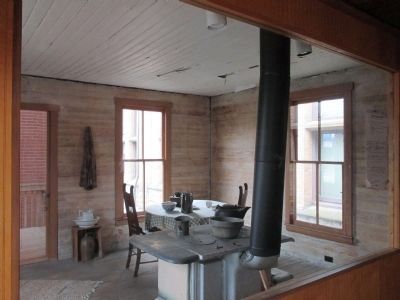 Photographed By Anton Schwarzmueller, August 22, 2014
3. Oklahoma House Interior
of 1889. The one-and a half story temporary houses came in two sizes - 16-by-24 feet and 10-by20 feet. In some cases, families combined one large and one small Oklahoma. The Oklahomas were provided with furnishings. The small houses were poorly suited for Johnstown's climate, and few owners found them satisfactory. A reporter from the Harrisburgh Telegraph, after examining one of the small Oklahomas, described it as having "...about as many points of architectural beauty as the coal shed behind the country school house... It is not as warm as an "A" tent and not half as roomy." To survivors who had seen their houses shatter into pieces, the Oklahomas were at least some kind of house. The destitute families were glad to get a furnished house without spending a cent.

The Oklahoma houses are significant in two respects: they document the living conditions of average Johnstown residents in the immediate aftermath of the disaster, and they represent one of the first examples of ready-made housing in the United States."
— Submitted September 10, 2014, by Anton Schwarzmueller of Wilson, New York. 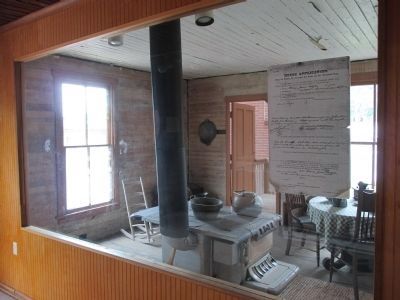 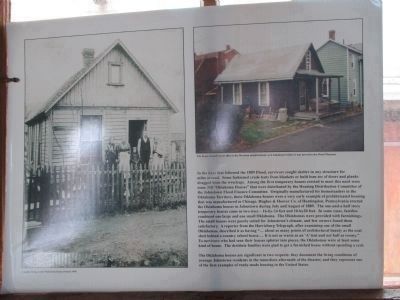