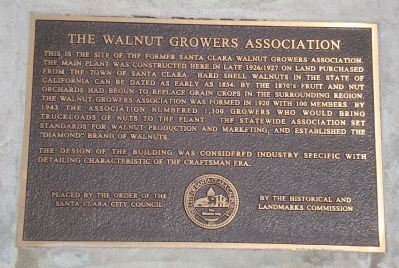 This is the site of the former Santa Clara Walnut Growers Association. The main plant was constructed here in late 1926/1927 on land purchased from the Town of Santa Clara. Hard shell walnuts in the state of California can be dated as early as 1854. By the 1870’s fruit and nut orchards had begun to replace grain crops in the surrounding region. The Walnut Growers Association was formed in 1920 with 100 members. By 1943 the association numbered 1,300 growers who would bring truckloads of nuts to the plants. The statewide Association set standards for walnut production and marketing, and established the “Diamond” brand of walnuts.

The design of the building was considered industry specific with detailing characteristic of the craftsman era.

Erected by Santa Clara City Council and the Historical and Landmarks Commission.

Topics. This historical marker is listed in these topic lists: Agriculture • Industry & Commerce. A significant historical year for this entry is 1854. 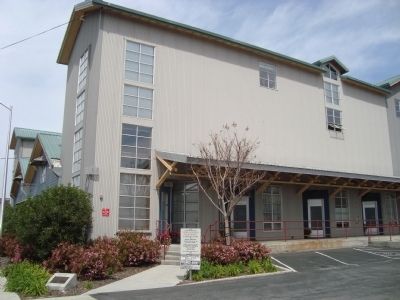 Photographed By Barry Swackhamer, March 29, 2012
2. The Walnut Growers Association Marker
The marker is in the left foreground.