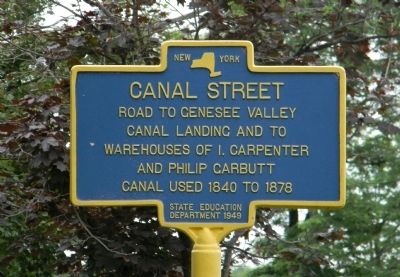 By Paul Crumlish, June 26, 2011
1. Canal Street Marker
Inscription.
Canal Street. . Road to Genesee Valley Canal landing and the warehouses of I. Carpenter and Philip Carbutt . Canal used 1840 to 1878 . This historical marker was erected in 1949 by New York State Education Department. It is in Scottsville in Monroe County New York

Road to Genesee Valley Canal landing and the warehouses of I. Carpenter and Philip Carbutt
Canal used 1840 to 1878

Other nearby markers. At least 8 other markers are within 2 miles of this marker, measured as the crow flies. Feeder Gates (within shouting distance of this marker); Genesee Valley Greenway (about 600 feet away, measured in a direct line); a different marker also named Genesee Valley Greenway (approx. 0.2 miles away); Northampton (approx. 0.2 miles away); First House (approx. ¾ mile away); Site of Early School (approx. 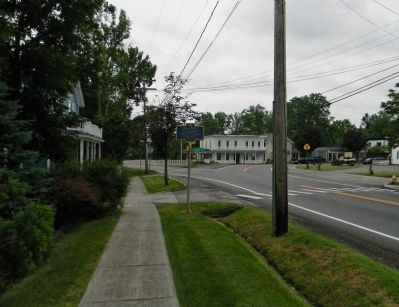 Related marker. Click here for another marker that is related to this marker. To better understand the relationship, study each marker in shown. 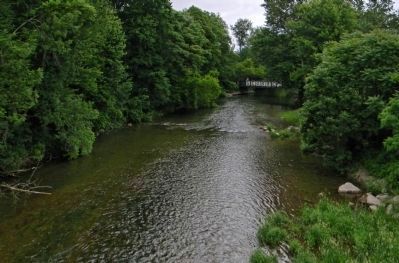 By Paul Crumlish, June 26, 2011
3. Modern Day view of Genesee River Canal
Looking down the Oatka Creek, the canal crossed the creek via an aqueduct where the abandoned railroad bridge is. The bridge was built on the foundations of the aqueduct. The warehouses and landing were on the left bank of the creek where it met the canal.
Credits. This page was last revised on June 16, 2016. It was originally submitted on April 5, 2012, by PaulwC3 of Northern, Virginia. This page has been viewed 553 times since then and 21 times this year. Photos:   1, 2, 3. submitted on April 5, 2012, by PaulwC3 of Northern, Virginia.

Editor’s want-list for this marker. Photos of the old warehouse ruins, during the fall or winter when the leaves are down, by the Canal Street boardwalk • Can you help?
Share This Page.