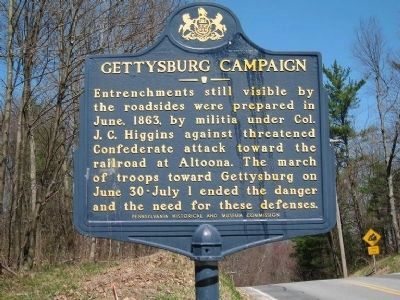 By Donald E Coho, April 6, 2012
1. Gettysburg Campaign Marker
Inscription.
Gettysburg Campaign. . Entrenchments still visible by the roadsides were prepared in June, 1863, by militia under Col. J.C. Higgins against threatened Confederate attack toward the railroad at Altoona. The march of troops toward Gettysburg on June 30-July 1 ended the danger and the need for these defenses. . This historical marker was erected in 1963 by Pennsylvania Historical and Museum Commission. It is in Everett in Bedford County Pennsylvania

Entrenchments still visible by the roadsides were prepared in June, 1863, by militia under Col. J.C. Higgins against threatened Confederate attack toward the railroad at Altoona. The march of troops toward Gettysburg on June 30-July 1 ended the danger and the need for these defenses.

Topics and series. This historical marker is listed in this topic list: War, US Civil. In addition, it is included in the Pennsylvania Historical and Museum Commission series list.

Location. 40° 6.05′ N, 78° 23.37′ W. Marker is in Everett, Pennsylvania, in Bedford County. Marker is on Upper Snake Spring Road (Pennsylvania Route 1005), on the right when traveling south. Approximately, entrenchments extend 120 yards westward and 85 yards eastward from the road and they are visible during Winter in satellite imagery. Near the western terminus at 40°6.004',-78°23.416', a second signpost contains detailed interpretive information. Touch for map. Marker is in this post office area: Everett PA 15537, United States of America. Touch for directions. 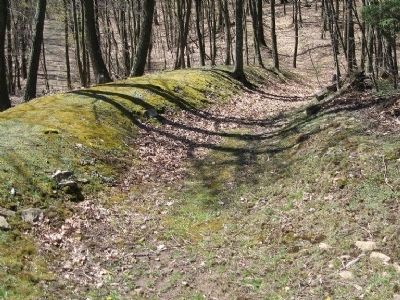 Regarding Gettysburg Campaign. Had Confederate General Robert E. Lee adopted a "scorched earth" strategy in Pennsylvania during late June of 1863, he would have encountered little resistance from a Union Army whose primary focus was defense of the U.S. capital. Perfect hindsight affords the conclusion that the railroad and iron-producing resources of central Pennsylvania were never effectively jeopardized by the Gettysburg Campaign, but at the time of the invasion, Lee's true motives and objectives were not obvious to Northerners. Furthermore, the Confederate Army detachment nearest to the railroad shops at Altoona was showing an unsettling penchant for the destruction of transportation-related infrastructure.
Confederate General John D. Imboden's "Northwestern Brigade" consisted of the combined 2,100 men and six cannons of the 18th Virginia Cavalry, 62nd Virginia Infantry, 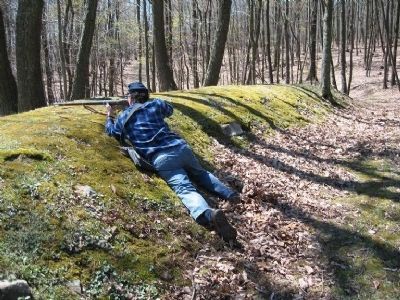 By C. Edward Coho, April 6, 2012
3. Appearance of Man of Average Civil War Soldier's Height (5'-8" to -9" ) in Trench
Militia men were poorly-equipped and -fed volunteers.
one company of the Virginia Partisan Rangers, and an artillery battery. During June, 1863, his Brigade had destroyed a half dozen bridges, rolling stock, depots, water tanks, and several blockhouses of the Baltimore and Ohio Railroad between Martinsburg, WV, and Cumberland, MD. It had also cut the Chesapeake and Ohio Canal in two places in Maryland and, within a short time after entering Pennsylvania, had become entirely mounted by benefit of the plunder of local horses. Once Imboden's Brigade was in Pennsylvania, its intentions became more limited-to act as a screen and to secure needed supplies for the remainder of General Robert E. Lee's Army of Northern Virginia.[1]

Knowing the destructive capabilities of the Northwestern Brigade but not its intentions, Major General Darius N. Couch (commanding the Department of the Susquehanna) requested Colonel Higgins to raise a regiment and Governor Andrew Curtin assigned him command of militia in southcentral Pennsylvania on June 16.[2] While his men hastily constructed makeshift forts in the mountain gaps, Higgins coordinated defense of the region with a fragment of General Robert H. Milroy's defeated Eight Corps, Second Division, who had retreated to Bloody Run after the Second Battle of Winchester. Upon application, Higgins surrendered artillery to Milroy's men and loaned them a battalion under Lieutenant Jacob Szink for an 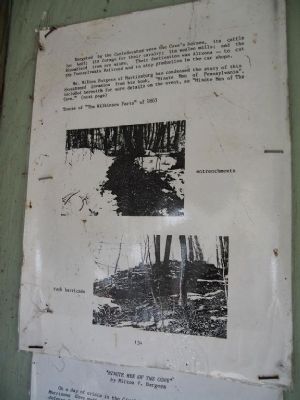 At McConnellsburg on June 29 the Northwestern Brigade sustained its first reverse. Company G of the 18th Virginia Cavalry, led by Captain William D. Erwin, was ambushed by Capt. Abram Jones' company of the 1st New York Cavalry from Milroy's Division, working with unarmed militia cavalrymen who created the appearance of a flanking attack. Fleeing town, Erwin's Cavalry was pursued and defeated in a saber duel.[4] Two Confederate men were killed (the first two C.S.A. soldiers to die in battle on Pennsylvania soil), and Erwin, Lieutenant Jordan, and twenty (or more) others were taken prisoner.[5]

Lee's orders were revealed by Imboden after the war:

"[Lee] ordered me to go into Pennsylvania as far as I deemed it prudent, west of North (Tuscarora) Mountain, and to keep an eye upon Milroy, who was reported to be collecting his scattered troops at Bloody Run."[6]
and expressed no geographic limitations. As Burgess interprets, "In this you see that General Imboden, while he had no specific order to move against Altoona, had the authority to do so, had he deemed it prudent."[7]