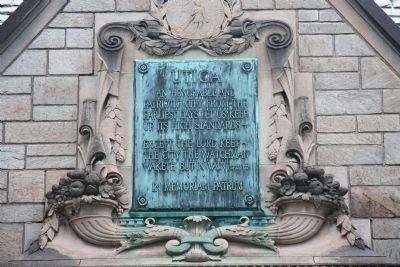 Photographed By Dale K. Benington, July 29, 2011
1. Utica Marker
Inscription.
Utica. .
Utica An honorable and Patriotic city from the Earliest days. Let us keep Up its high standards –, Except the Lord keep – The city the watchman waketh but in vain. , in Memoriam Patrum. . This historical marker is in Utica in Oneida County New York

Utica
An honorable and
Patriotic city from the
Earliest days. Let us keep
Up its high standards –

Except the Lord keep –
The city the watchman
waketh but in vain.

Location. 43° 6.264′ N, 75° 13.472′ W. Marker is in Utica, New York, in Oneida County. Marker is on Main Street west of Railroad Street, on the right when traveling west. This historical marker is located in a small downtown park, called the "Bagg's Square Memorial Park," that has been rendered difficult to reach by the construction of a highway bridge just to west of the marker that brings Main Street to an abrupt halt a few car lengths beyond the entrance to the park. Because the historic marker is hemmed in by the highway bridge immediately to it's west and a major railway line a short distance to it's north, the options of how to get to this 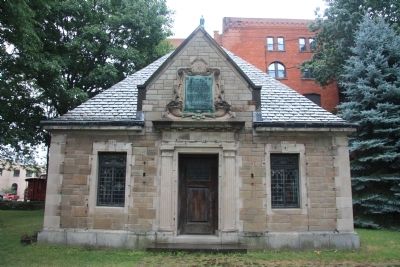 Photographed By Dale K. Benington, July 29, 2011
2. Utica Marker
View of the historic marker affixed above the entrance of the featured structure in the small downtown park.

Click or scan to see
this page online
historic marker are limited. I would suggest approaching this site on Broad Street, then turning north on Railroad Street and at the next intersection turning left (west) onto Main Street and proceeding west until Main Street deadends at the end of the block. The park with the historic marker is immediately to the north of where Main Street comes to an end. Touch for map. Marker is in this post office area: Utica NY 13501, United States of America. Touch for directions.

More about this marker. For anyone that is interested in history, and enjoys viewing historic markers, visiting this marker is well worth the degree of difficulty that one must endure to reach it. There are a number of additional, significant historical markers in the park where this marker is located. 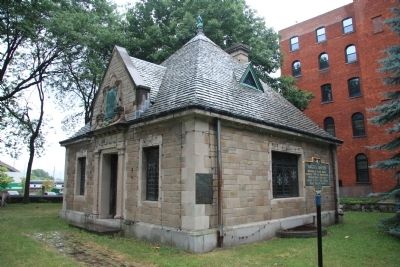 Photographed By Dale K. Benington, July 29, 2011
3. Utica Marker
View of the southwest corner of the structure with the historic marker affixed above the front entrance. 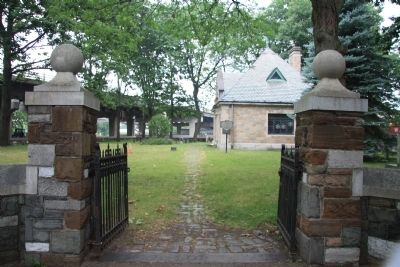