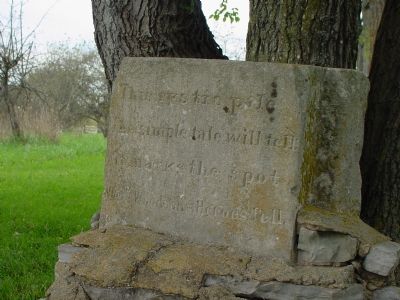 By J. J. Prats
1. Missouri Monument
Inscription.
This Rustic Pile. . . . This rustic pile . The simple tale will tell: . It marks the spot . Where Woodson’s Heroes fell. . . This historical marker was erected in 1909 by surviving members of Confederate Captain Charles Hugh Woodson’s Company A, First Missouri Cavalry. It is Near New Market in Shenandoah County Virginia

This rustic pile
The simple tale will tell:
It marks the spot
Where Woodson’s Heroes fell.

Location. 38° 39.843′ N, 78° 40.026′ W. Marker is near New Market, Virginia, in Shenandoah County. Marker is on George Collin Parkway aka Miller Lane (Virginia Route 305) near Interstate 81, exit 264 west (U.S. 211), on the left when traveling north. It is on the grounds of the New Market Battlefield State Historical Park, north the Bushlong house. Touch for map. Marker is in this post office area: New Market VA 22844, United States of America. Touch for directions.

Other nearby markers. At least 5 other markers are within walking distance of this marker. “Good-bye, Lieutenant, I am killed.” (here, next to this marker); The Bushong Farm (about 400 feet away, measured in a direct line); Heroism in Defeat (about 700 feet away); The Battle of New Market 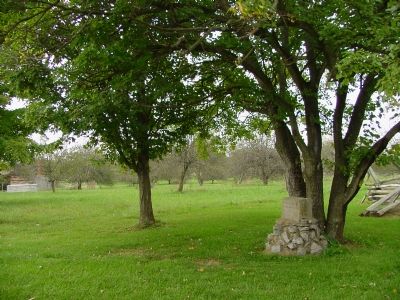