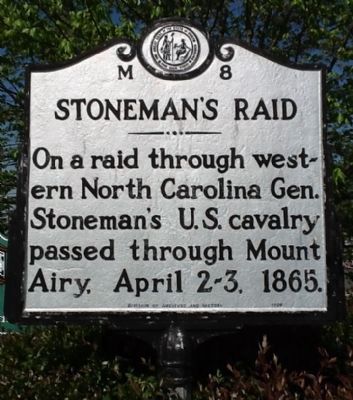 Photographed By Michael C. Wilcox, April 14, 2012
1. Stoneman’s Raid Marker
Inscription.
Stoneman’s Raid. . On a raid through western North Carolina Gen. Stoneman’s U.S. cavalry passed through Mount Airy, April 2-3, 1865. . This historical marker was erected in 1995 by Division of Archives and History. It is in Mt. Airy in Surry County North Carolina

Erected 1995 by Division of Archives and History. (Marker Number M-8.)

Topics and series. This historical marker is listed in this topic list: War, US Civil. In addition, it is included in the North Carolina Division of Archives and History series list. A significant historical date for this entry is April 2, 1865. 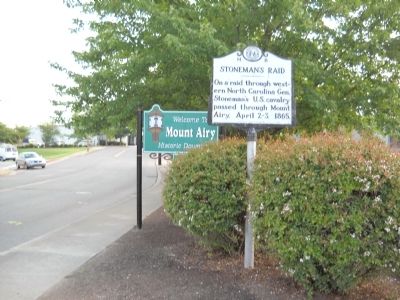 Additional commentary.
1. Award-winning book on Stoneman's Raid
I went to a book talk today by the author, Chris J. Hartley, of a recently published book titled "Stoneman's Raid, 1865". The event was at the Mt. Airy Museum of Regional History. Mr. Hartley led a fascinating presentation on Stoneman's Raid and the making of his award-winning book. I've added a link to the book's website on this page. Reviews indicate it is a well-researched book, and I look forward to reading my autographed copy. I couldn't resist a visit to the nearby historic marker on the subject, and have added a few photos that I hope enhance this entry in the HMdb. Note To Editor only visible by Contributor and editor
— Submitted April 14, 2012, by Michael C. Wilcox of Winston-Salem, North Carolina. 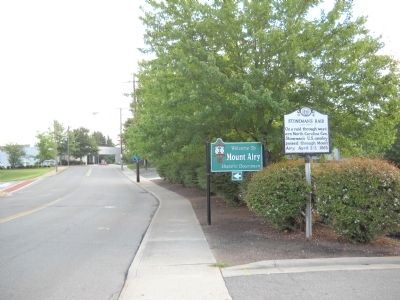