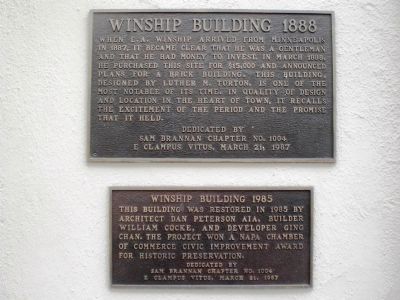 Photographed By Andrew Ruppenstein, February 21, 2009
1. Winship Building 1888 Marker
Inscription.
Winship Building 1888. . When E.A. Winship arrived from Minneapolis in 1887, it became clear that he was a gentleman and that he had money to invest. In March 1888, he purchased this site for $15,000 and announced plans for a brick building. This building, designed by Luther M. Turton, is one of the most notable of its time. In quality of design and location in the heart of town, it recalls the excitement of the time and the promise that it held., Dedicated by , Sam Brannan Chapter No. 1004 , E Clampus Vitus, March 21, 1987, [Supporting plaque below reads]:
Winship Building 1985. This building was restored in 1985 by architect AIA, builder William Cocke, and developer Ging Chan. The project won a Napa Chamber of Commerce Civic Improvement Award for Historic Preservation., Dedicated by , Sam Brannan Chapter No. 1004 , E Clampus Vitus, March 21, 1987 . This historical marker was erected in 1987 by Sam Brannan Chapter No. 1004, E Clampus Vitus. It is in Napa in Napa County California

When E.A. Winship arrived from Minneapolis in 1887, it became clear that he was a gentleman and that he had money to invest. In March 1888, he purchased this site for $15,000 and announced plans for a brick building. This building, designed by Luther M. Turton, is one of the most notable of its time. In quality of design and location in the heart of town, it recalls the excitement of the time and the promise that it held.

Topics and series. This historical marker is listed in this topic list: Notable Buildings. 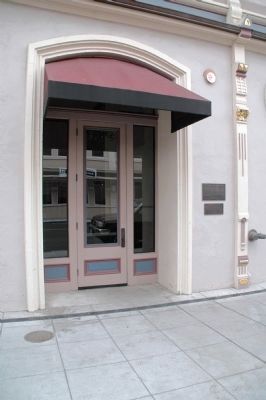 Click or scan to see
this page online
In addition, it is included in the E Clampus Vitus series list. A significant historical month for this entry is March 1888.

Additional commentary.
1. Additional Information Regarding the Marker Dedication
Jim Voss was Noble Grand Humbug when these plaques were placed. Plaque 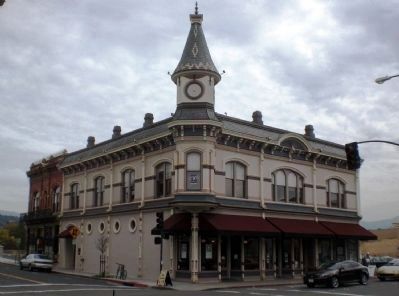 Photographed By Andrew Ruppenstein, February 21, 2009
3. Winship Building
Italianate, brick, constructed in 1888. Designed by noted local architect Luther Turton (1862-1925). The building originally had a clock tower, but that was removed as a safety measure in 1906 after the San Francisco earthquake. The building was recently restored to its original colors and the tower added back on.
wording by Loren A. Wilson.
— Submitted April 15, 2012, by Loren Wilson of Sebastopol, California.
2. Historical and Architectural Significance
The years 1887 and 1888 were good years in Napa. They followed several disappointing years in California, during which the dramatic growth and prosperity that many people expected had not materialized. In August 1887, the local real estate market began showing signs of improvement and the local newspapers were soon predicting a boom. The demand for city property increased greatly and the diffused excitement of real estate speculators quickly focused on the common need for a new rail line to Napa. Optimism ran high and public meetings raised money for the railroad, which opened in January of 1888. A few months later, a street railway was proposed to run north and south on Main from First Street. Although it was never built, it was indicative of the hope that many people had at that time for the future of Napa. New buildings were announced all over town, including the Masonic Temple on Second Street and a number of buildings around First and Main. By the end of the year, that intersection had emerged as the busiest in town, and for the first time there were virtually no vacant spaces downtown for building. Most of the old frame buildings 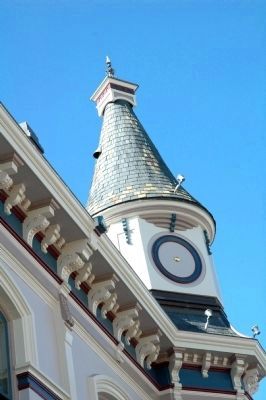 Photographed By Loren Wilson, April 14, 2012
4. Detail of building cupola
had been replaced by newer, larger, more ornamented, and imposing structures of iron, brick, and stone. In December 1888, the papers noted that the year had been one of the busiest for construction in Napa’s history.

One of the most notable buildings of 1888 was the Winship Building, on First Street east of Main. In the quality of design and location at the heart of the town, this building recalls the excitement of that period and the promise that it held. As the real estate market improved in the region in 1887, local agents began receiving inquires from other parts of California and the United States. One man who responded was E. A. Winship, whose arrival in Napa from Minneapolis was recorded on the front page of the Napa Reporter in December of 1887.

His social and business life were also followed by the press during the next few months, as it was clear that he was a gentleman and that he had money to invest. Within a few weeks of his arrival he had purchased a frame building on Main Street which he remodeled, crowning each of its two stick style bays with high, crested Mansard caps. In March, Winship purchased the southeast corner of First and Main for $15,000 and announced plans for construction of the new brick building on the site. Construction on the new Winship Building began in July 1888. The walls were completed by the end of September and the building was finished shortly thereafter. At the time the building was announced, the Napa Recorder wrote, “(it) will speak volumes for the enterprise of Mr. Winship whose push and faith in the future of our city is to be applauded.”

Each grouping of windows is set in a segmental hood molding that continues around the building in a string course. The quadruple window consists of two smaller windows flanking two larger ones, each with a circular head and plain spandrels. There are four bays of paired windows on First Street. The bracketed cornice was originally covered with a slate roof which has been replaced by red tile. An ornamental iron cresting was also removed.

A circular pediment in the cornice on the Main Street side contains a sunburst pattern. There was originally another pediment in the parapet above the cornice pediment, with the name of the building and the year of construction, and a flagpole rising above it. At the corner of the building is an overhanging octagonal bay, which originally carried an octagonal tower with a tall pointed slate roof that measured sixty-one feet from ground to finial. There were three bulls-eye windows in the tower, and the tower room could be entered from the roof. The tower survived the Earthquake of 1906, but was removed probably around 1910 when the iron cresting was removed and the slate cornice replaced by tile.

There were originally three stores on the ground floor, each twenty feet wide and sixty-five feet long, reaching the length of the building from Main Street. The stores were remodeled in 1918 and 1940. In 1950 a more complete remodeling covered the still existing cast iron columns and opened up the First Street side with display windows. The staircase was moved from the south side of the old middle store to the south wall of the building, and a brick wall between the middle and south store was removed to accommodate the drug store which took over the whole floor. Upstairs there were originally two suites and a single office on Main Street, three suites on First Street, and one suite in back. The hallway was lit by a skylight which also lit the ground floor through a well. Reorganizations over the years have resulted in the creation of five suites of offices and the loss of the light well to the ground floor through the addition of a room. Although the skylight is still intact, it is partially blocked by the addition.