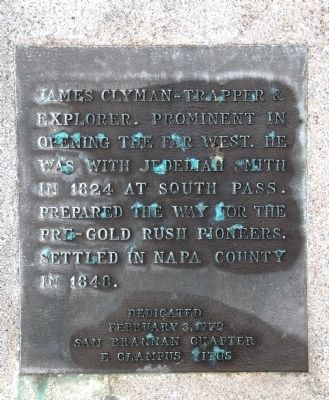 James Clyman - Trapper and Explorer. Prominent in opening the Far West. He was with Jedediah Smith in 1824 at South Pass. Prepared the way for the pre-Gold Rush pioneers. Settled in Napa County in 1848.

Topics and series. This historical marker is listed in these topic lists: Cemeteries & Burial Sites • Exploration • Settlements & Settlers. In addition, it is included in the E Clampus Vitus series list. A significant historical year for this entry is 1824.

Location. 38° 17.966′ N, 122° 16.316′ W. Marker is in Napa, California, in Napa County. Marker can be reached from Coombsville Road. Plaque is placed on Clyman’s grave which is located in Tulocay Cemetery. His grave site is near the block 50 marker, and close to the intersection of Quail Drive and Fern Lane. Touch for map. Marker is at or near this postal address: 411 Coombsville Road, Napa CA 94558, United States of America. Touch for directions.

Other nearby markers. At least 8 other markers are within walking distance of this marker. Dave Cavagnaro Circus Plaza (approx. 0.4 miles away); The Napa River (approx. 0.6 miles away); Lieutenant William W. Murphy 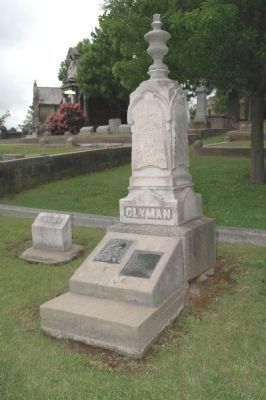 Photographed By Loren Wilson, May 24, 2008
2. James Clyman--Trapper and Explorer Monument

Regarding James Clyman--Trapper and Explorer. The brass bas relief plaque of James Clyman was made by noted California sculptor William Gordon Huff.

Also see . . .
1. Narrative, by James Clyman. Transcribed copy of the original manuscript owned by the State Historical Society of Wisconsin. (Submitted on April 17, 2012.)

2. James Clyman: A Man to Match the Mountain. Sierra Sun website entry:
Clyman was a rare man among the early trappers because he kept a journal for nearly all of his adult life in which he chronicled his incredible adventures. Although telling tall tales was considered an art among mountain men, Clyman’s first-hand 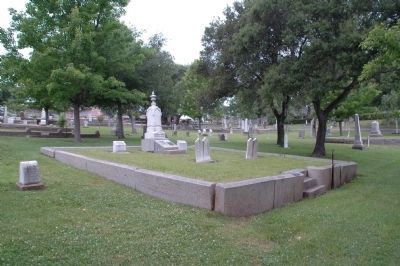 Photographed By Loren Wilson, May 24, 2008
3. James Clyman--Trapper and Explorer Monument and Grave Site
recollections are a conspicuously sober and meticulous record. (Submitted on April 17, 2012.)

Additional commentary.
1. James Clyman
Col. James Clyman came to California as early as 1846, and is one of the early pioneers of Napa County. He was born in Fauquier County, Virginia on February 1st, 1792. His father moved to Stark County, Ohio in 1812, about the time of the battle of Tippecanoe. Hull's surrender at Detroit in 1812 opened all the Northwest to the depredations of Indians. Clyman, then a young man, volunteered as a ranger and spy on the borders of North Ohio, and so served until after Perry's victory and the battle of the Thames. He then went further west to Indiana. Having learned the profession of a surveyor, young Clyman was engaged for a while in surveying government lands in Indiana, under Major Morris, who had a contract for the work. In 1823, when this was completed, he enlisted in Lt. Governor Wm. H. Ashley's expedition against the Indians up the Missouri, during which he experienced terrible hardships, and was engaged in fierce battles with the Rickarees and other Indian tribes, the marks of which he bears to this day. He returned to the States and remained in Missouri and Wisconsin for seventeen years. He returned just in 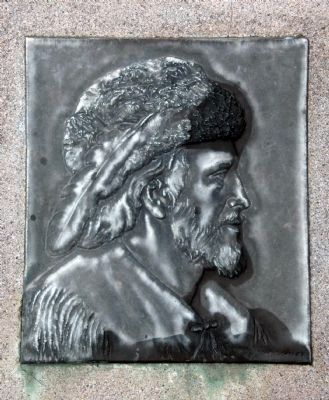 Photographed By Loren Wilson
4. James Clyman--Trapper and Explorer
Detail on Monument
season to bear a part in the Black Hawk war, and was out in the whole of it, serving in the same company with Abraham Lincoln. He lived in St. Louis at the time the city received its first charter. He left there in March 1824, and in 1827 he circumnavigated Salt Lake in boats made of buffalo hides, and the next year returned to civilization and began retailing merchandise in Vermillion County, Illinois. He volunteered in the Sauk War and was present at the surrender of Black Hawk. At the close of this war he received his appointment in the U.S. Army, which position he held for two years and then resigned. In 1834 he made a claim on the ground where the city of Milwaukee now stands. But a prior claim arose and he removed to Western Missouri. Clyman then decided to cross the plains with a company of emigrants then fitting out for Oregon. He joined the company at Independence, Mo. and traveled with them to Oregon, and thence by the land route he arrived in Napa in 1845, and returned East the following summer. Three years after he made a final settlement upon the beautiful farm two miles northwest of Napa City. Col. Clyman kept an itinerary of all his journeyings, which he wrote up at night by the light of his camp-fire. It evinces good intelligence, sound judgment and shrewd observation. He describes the soil, scenery, timber, climate and other peculiarities of California with a minuteness of detail not elsewhere to be met with, giving the most vivid and graphic pictures of the country just as it was in 1845.
Clyman's grammar and spelling were original, to say the least, but his tales convey the mountaineers' way of life brilliantly.
Here is a segment from the diary, concerning Jedediah Smith, famed hunter and explorer who discovered the South Pass over the Rocky Mountains while with Clyman . "...a large Grissly came down the vally we being in single file men on foot leading pack horses he struck us about the center then turning run parallel to our line. Capt Smith being in the advanc he ran to the open ground and as he immerged from the thicket he and the bear met face to face Grissly did not hesitate a moment but sprung on the capt raking him by the head pitching sprawling on the earth he gave him a grab by the middle fortunately catching him by the ball pouch and Butcher Knife which he broke but breaking several of his ribs and cutting his head badly none of us having any surgical Knowledge what was to be done one Said come take hold and he wuld say why not you so it went around. I asked the Capt. what was best. He said one or 2 go for water and if you have a needle and thread git it out and sew up my wounds around my head which was bleeding freely. I got a pare of scissors and cut off his hair and then began my first Job of dressing wounds. Upon examination I found the bear had taken nearly all his head in his capcious mouth close to his left eye on one side and clos to his right ear on the other and laid the skull bare to near the crown of the head leaving a white streak whare his teeth passed. One of his ears was torn from his head out to the outer rim-”
" After stithing all the other wounds in the best way I was capable according to the captains directions the ear being the last I told I could do nothing for his Eare. O you must try to stich up some way or other said he. Then I put in my needle stiching it through and through and over and over laying the lacerated parts together as nice as I could with my hands. Water was found in about a mille when we all moved down and en-camped the captain being able to mount his horse and ride to camp whare we pitched a tent the onley one we had and made him as comfortable as circumtances would permit this gave us a lisson on the character of the grissly Baare which we did not forget.”
James Clyman was a trapper and explorer who played an important part with Jedediah Smith in the opening of the Far West to settlers. Clyman was raised on a farm owned by George Washington and fought alongside Abraham Lincoln in Illinois. Clyman first came to Napa County in 1845 and settled here in 1848. He continued to hunt almost to the day of death December 27, 1881.
— Submitted April 16, 2012, by Loren Wilson of Sebastopol, California.
2. Additional Information Regarding the Marker Dedication
Harry Downham was Noble Grand Humbug when this plaque was dedicated. Plaque wording by Edward D. Hawkins.
— Submitted April 16, 2012, by Loren Wilson of Sebastopol, California.
Credits. This page was last revised on May 19, 2021. It was originally submitted on April 16, 2012, by Loren Wilson of Sebastopol, California. This page has been viewed 877 times since then and 74 times this year. Photos:   1, 2, 3, 4. submitted on April 16, 2012, by Loren Wilson of Sebastopol, California. • Syd Whittle was the editor who published this page.
Share this page.