Our Heroes of World War II 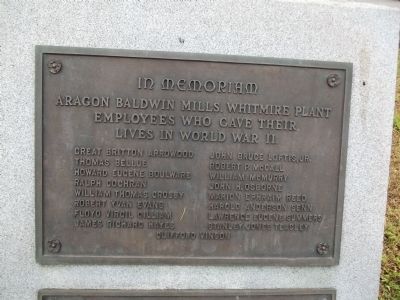 Location. 34° 30.167′ N, 81° 36.604′ W. Marker is in Whitmire, South Carolina, in Newberry County. Marker is on Union Street near Church Street, on the right when traveling east. Marker is on the grounds of the Whitmire Library. Touch for map. Marker is in this post office area: Whitmire SC 29178, United States of America. Touch for directions.

Other nearby markers. At least 8 other markers are within 10 miles of this marker, measured as the crow flies. Whitmire War Memorial (here, next to this marker); Textile Memorial (approx. ¼ mile away); Veterans Memorial 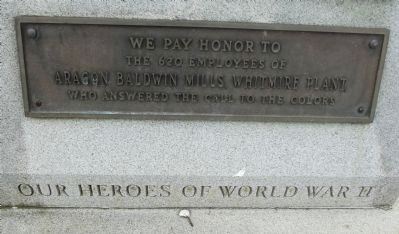 By Anna Inbody, April 15, 2012
2. Our Heroes of World War II Marker
We Pay Honor to the 620 Employees of Aragon Baldwin Mills, Whitmire Plant who answered the call to the colors
(approx. 0.6 miles away); Otterson's Fort (approx. 6.1 miles away); Ebenezer Methodist Church (approx. 7½ miles away); Rose Hill Mansion (approx. 7.8 miles away); Gist Cemetery (approx. 7.9 miles away); Mount Bethel Academy (approx. 9.8 miles away). Touch for a list and map of all markers in Whitmire. 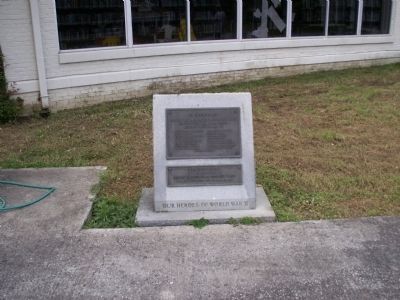 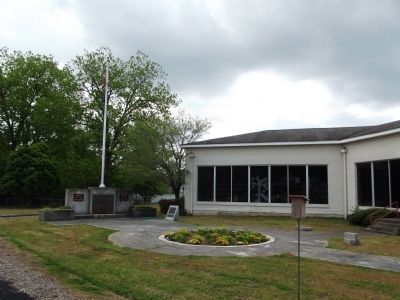