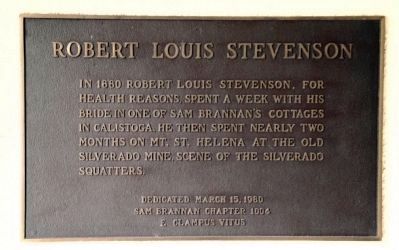 In 1880 Robert Louis Stevenson, for health reasons, spent a week with his bride in one of Sam Brannan’s cottages in Calistoga. He then spent nearly two months on Mt. St. Helena at the old Silverado Mine, scene of the Silverado Squatters.

Topics and series. This historical marker is listed in these topic lists: Arts, Letters, Music • Science & Medicine. In addition, it is included in the E Clampus Vitus series list.

Location. 38° 30.543′ N, 122° 28.16′ W. Marker is in St. Helena, California, in Napa County. Marker can be reached from Library Lane. Plaque is located at the entrance to the Silverado Museum. Touch for map. Marker is at or near this postal address: 1490 Library Lane, Saint Helena CA 94574, United States of America. Touch for directions.

Other nearby markers. At least 8 other markers are within 2 miles of this marker, measured as the crow flies. Richie Block (approx. 0.3 miles away); NSGW & Historic District (approx. 0.4 miles away); Hudson House (approx. 0.6 miles away); Beringer Brothers Winery 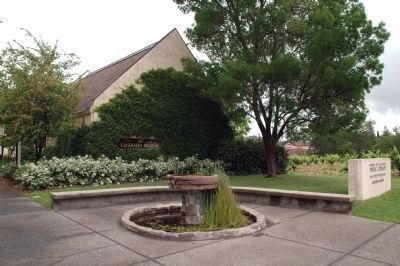 While traveling in France in 1876, he met and fell in love with a charming American, Mrs. Fanny Van de Grift Osbourne. Unhappily married, she had come with her two children to the small art colony of Grez to study painting. Three years later, Stevenson followed her to America. She secured her divorce in December 1879 and six months later the couple was married in San Francisco on May 19, 1880. While waiting to marry Fanny, Stevenson had lived in Monterey and San Francisco, where fogs played havoc with lungs weak from boyhood. He was in an advanced stage of 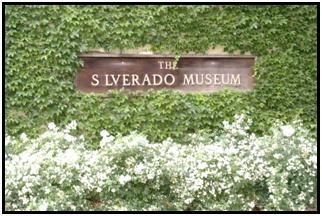 By Loren Wilson
3. Silverado Museum
tuberculosis at the time of his marriage, and, to improve his health, the couple came to the Napa Valley on May 22. A week in one of Sam Brannan's cottages at the hot springs spa in Calistoga proved ruinously expensive for the Stevenson's—ten dollars a week for board and room! They then found free lodging in an abandoned bunkhouse at the old Silverado Mine on Mount St. Helena. They evicted the resident rattlesnakes, cleared out the poison oak, and settled in for nearly two months. The mountain air restored the groom's health.

His parents settled a generous annual income on him, and, with his bride, he returned to Scotland. There his health soon failed again and a long trek began in search of a congenial climate. During two winters at Davos Platz in Switzerland he relived his stay on Mount St. Helena in The Silverado Squatters, and in Treasure Island, also partially written in Switzerland. He recalled the terrain around Monterey, while Mount St. Helena became Spyglass. The Stevensons next moved to Hyeres, France, where their stay was ended by a cholera scare in the next town. They then fled to Bournemouth on the south coast of England, where they lived from 1884 to 1887, with Stevenson in the worst health he had known. However, some of his most notable works belong to this period: Kidnapped, A Child's Garden of Verses, and the world famous Dr. Jekyll and Mr. Hyde. 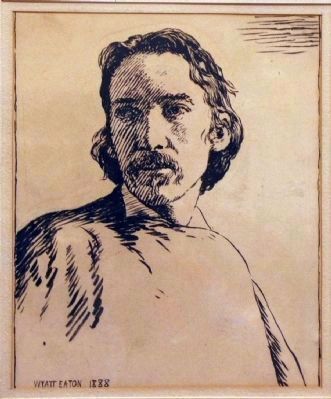 4. Robert Louis Stevenson
After the death of his father, Stevenson, his wife, his widowed mother, and his step-son, Lloyd Osbourne, spent a winter at Saranac Lake, New York, a resort for tubercular patients. From there the Stevenson's returned to California just long enough to charter the schooner yacht "Casco" which took them through the Marquesas and Tahiti to Hawaii. Following a stay of five months there the Stevenson's went on to Samoa, where they built their home "Vailima" and Stevenson enjoyed four years of good health. At the end of a busy, happy day on December 3, 1894, he died of a cerebral hemorrhage, leaving behind him a legacy of over sixty books that he had written.

Seventy-five years after his death on December 14, 1969 the Silverado Museum, devoted to his life and works, was opened in St. Helena, California