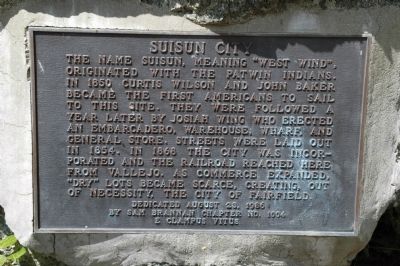 Photographed By Loren Wilson, April 25, 2008
1. Suisun City Plaque
Inscription.
Suisun City. . The name Suisun, meaning “west wind” originated with the Patwin Indians. In 1850 Curtis Wilson and John Baker became the first Americans to sail to this site. They were followed a year later by Josiah Wing who erected an embarcadero, warehouse, wharf, and general store; streets were laid out in 1854. In 1868 the city was incorporated and the railroad reached here from Vallejo. As commerce expanded, “dry” lots became scarce, creating, out of necessity, the City of Fairfield. . This historical marker was erected in 1986 by Sam Brannan Chapter No. 1004, E Clampus Vitus. It is in Suisun City in Solano County California

The name Suisun, meaning “west wind” originated with the Patwin Indians. In 1850 Curtis Wilson and John Baker became the first Americans to sail to this site. They were followed a year later by Josiah Wing who erected an embarcadero, warehouse, wharf, and general store; streets were laid out in 1854. In 1868 the city was incorporated and the railroad reached here from Vallejo. As commerce expanded, “dry” lots became scarce, creating, out of necessity, the City of Fairfield.

Topics and series. This historical marker is listed in this topic list: Settlements & Settlers. In addition, it is included in the E Clampus Vitus series list. A significant historical year for this entry is 1850.

Location. 38° 14.258′ N, 122° 2.42′ W. Marker is in Suisun City, California, in Solano County. Marker can be reached from Main Street, on the right when traveling south. Marker is mounted on a large rock between 718 and 720 Main Street. Touch for map. Marker is at or near this postal address: 800 Main Street, Suisun City CA 94585, United States of America. Touch for directions. 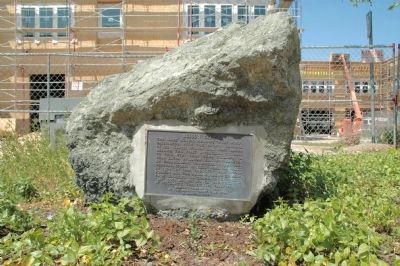 Additional commentary.
1. Additional Information Regarding the Marker Dedication
Reggie Kostner was Noble Grand Humbug when this plaque was dedicated. PlaqueWording by Loren A. Wilson
— Submitted April 17, 2012, by Loren Wilson of Sebastopol, California.
2. Suisun City
Suisun’s name was originated by a tribelet of the Patwin Indians who used the name, meaning west wind, to identify their small (somewhat more than 100) group, who occupied sites in and around Suisun Valley and Green Valley, adjacent to Suisun Marsh.
The Patwin were a subgroup of the larger Western Cultural region, the largest in northern California. It is thought that the Patwin occupied major portions of Yolo, Colusa, and Solano Counties. Each tribelet had a chief. The Suisun’s 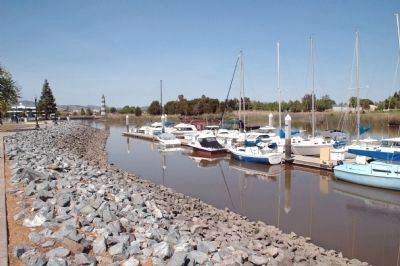 Photographed By Loren Wilson, April 25, 2008
3. Suisun Channel
Chief was Semyeto, later baptized by General Vallejo as Francisco Solano. The tribelet chief has absolute power as military leader and administrator of his tribelet. The Patwin established fairly permanent settlements, but many tribelet members spent most of their time away from their villages in search of food, mainly acorns, seeds, fish, deer, elk, and waterfowl. There are many Indian sites in the Fairfield/Suisun area, most of which have been disturbed by farming and construction activities. Some archeological studies have been made of their sites, but little is known about the Patwin because they left few artifacts and lived a relatively simple life in terms of possessions and living quarters. The Patwin often ventured from their villages to exchange goods with other cultural groups in northern California. The Suisun’s fashioned jewelry from shells, to trade for obsidian, hides, and feathers with their northern neighbors. This relatively peaceful life changed radically with the founding in 1776 of a Spanish Presidio in Yerba Buena and the subsequent establishment of missions there and in Sonoma. The Indians were lured to the missions with gifts for the purpose of converting them to Christianity and to assist in the operation of the missions, but the Indians life at the missions was far from pleasant. The Indians suffered emotionally from their rapid transition to an alien way 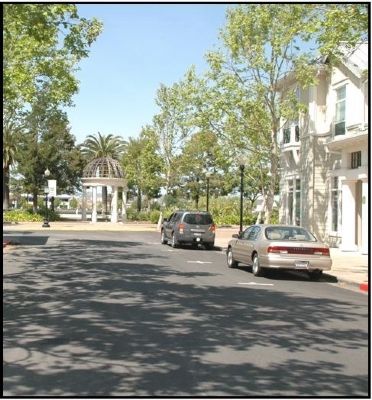 Photographed By Loren Wilson
4. Suisun City Downtown
of life and physically from exposure to European diseases, poor sanitary conditions in their crowded mission quarters. Indian runaways from the mission were called cimarrones by the Spanish and began to convey fear and hatred of their mission life to the tribelets which remained outside the Padre’s sphere of influence. The Suisun tribelet was particularly irritation to the Spanish authorities. Beginning in 1807, the Suisun’s launched a series of attacks on outposts of the Bay Area missions. In 1810, Gabriel Moraga was sent from the San Francisco Presidio with a force of Spanish solders and neophytes (Indian converts) to pressure for a counter attack against the Suisun. Moraga was met buy125 warriors at an unidentified village near Suisun Marsh. Nearly all the Indians were killed; other such confrontations occurred. In 1824 the Sonoma Mission established a rancho called Suisun. It was here in 1824 that the Suisun Chief Semyeto was baptized as Francisco Solano. In the succeeding years, Chief Solano came under increasing pressure from his Indian advisors to resist the whiter man’s intrusion. The Mexican governor in Monterey had appointed General Mariano Guadalupe Vallejo as commissioner of the Sonoma Mission and he was given specific orders to quell rumors of revolt among Chief Solano and his allies. Vallejo met with Solano and they became friends and allies. Solano subsequently helped Vallejo in many successful campaigns against hostile Indian groups of northern California and the Central Valley. In 1837, Vallejo was instrumental in granting of a Spanish land grant, Suisun Rancho, to Chief Solano. Solano latter sold Suisun Rancho and disappeared for a while after Vallejo’s capture by Americans in the premature Bear Flag Revolt in 1846. Chief Solano reportedly wandered through what is now Oregon, Washington and British Columbia. He was reunited with Vallejo in 1850 and died at the end of that year. Although the Armijo’s, Pena’s and Vaca’s had settled land grants in the area during the 1830’s and 1840’s, it was not until 1842 that John Wolfskill, the first native American settled in Solano County and later received a Spanish land grant. Other settlers followed including John Berry who, in 1847, settled on land tow miles north of Rockville.
These early settlers engaged in agriculture and raising cattle. The gold rush gave major stimulus to agriculture in the area, and in 1850, Curtis Wilson and John Baker became the first Americans to sail up the Suisun Slough to the present site of Suisun City. They were followed the following year by Josiah Wing, skipper of the schooner Anna Sophia. Wing discovered a small area which was just five feet above the surrounding marsh. This island was separated from the mainland by 100 yards of marsh. Wing established an embarcadero as a shipping point for agricultural products from the area. His establishment became known as Suisun with the construction of a wharf, warehouse, and general store. In 1854, Suisun’s streets were laid out and by 1855 Wing had six vessels to handle the shipping trade.
The next major change in Suisun occurred in 1868 when the rails of the Central Pacific Railroad reached Suisun from Vallejo through Jameson Canyon. On the morning of June 24th, a five car train packed with sightseers left Vallejo for their first trip over the newly laid track. Upon their arrival at Suisun, the visitors joined local residents in a celebration which featured speeches, band music a banquet and a dance. The completion of the transcontinental railroad a few months later reduced the trading area of Suisun as there were now stations at Elmira and Vacaville.
Suisun’s embarcadero suffered too, as farm products increasingly moved by rail, but the waterfront continued to play an important role in Suisun’s economy through the turn of the century. Central Solano County’s largest stores lined Main Street and the Plaza. The town also boasted the area’s only bank, a hotel, saloons and restaurants. During the 1880’s and 1890’s several large fruit packing companies, including the J. K. Arnsly Cannery were building along the Central Pacific tracks which ran through town. As Suisun’s trade and industry expanded, “dry” land became more scarce, and by 1910, because of spacious lots, more popular for home sites, Fairfield’s population exceeded that of Suisun City.
Suisun City was plagued by major fires in 1886, 1888, and 1906. The 1888 blaze destroyed every store and depot for supplies in the city. The Southern Pacific Depot burned in 1906. The establishment of a new military base in 1942 brought long term implications for the area. It was in that year that the Navy started using the fields east of Fairfield for aircraft practice landings. In 1945, a major expansion of the Fairfield-Suisun Base took place, and in 1950 the installation was renamed after Brigadier General Robert F. Travis was killed in an airplane crash at the base.
Downtown Suisun City, once the heart of commerce for the area, has been largely bypassed by development in recent decades. It remains as a reminder of the rich and unique heritage of the area. Although pleasure boats have replaced cargo schooners and small business operate where large hotels once stood, downtown Suisun City can look forward to rebirth of importance as it once again turns toward it’s all important resource—the Suisun Channel.
Loren Wilson, NGH #10—1986
— Submitted April 17, 2012, by Loren Wilson of Sebastopol, California.
Credits. This page was last revised on June 16, 2016. It was originally submitted on April 17, 2012, by Loren Wilson of Sebastopol, California. This page has been viewed 780 times since then and 76 times this year. Photos:   1, 2, 3, 4. submitted on April 17, 2012, by Loren Wilson of Sebastopol, California. • Syd Whittle was the editor who published this page.
Share this page.