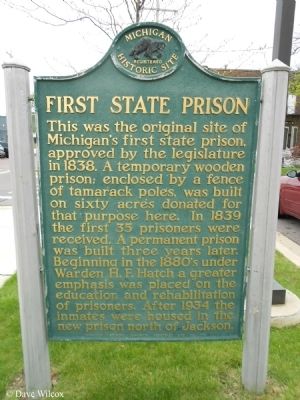 Photographed By Dave Wilcox, April 14, 2012
1. First State Prison Marker
Inscription.
First State Prison. Registered Michigan Historic Site. This was the original site of Michigan's first state prison, approved by the legislature in 1838. A temporary wooden prison, enclosed by a fence of tamarack poles, was built on sixty acres donated for that purpose here. In 1839 the first 35 prisoners were received. A permanent prison was built three years later. Beginning in the 1880's under Warden H. F. Hatch a greater emphasis was placed on education and rehabilitation of prisoners. After 1934 the inmates were housed in the new prison north of Jackson. . This historical marker was erected in 1958 by Michigan Historical Commission. It is in Jackson in Jackson County Michigan

This was the original site of Michigan's first state prison, approved by the legislature in 1838. A temporary wooden prison, enclosed by a fence of tamarack poles, was built on sixty acres donated for that purpose here. In 1839 the first 35 prisoners were received. A permanent prison was built three years later. Beginning in the 1880's under Warden H. F. Hatch a greater emphasis was placed on education and rehabilitation of prisoners. After 1934 the inmates were housed in the new prison north of Jackson.

Topics and series. This historical marker is listed in this topic list: Law Enforcement. In addition, it is included in the Michigan Historical Commission series list. A significant historical year for this entry is 1838.

Location. 42° 15.4′ N, 84° 24.367′ W. Marker is in Jackson, Michigan, in Jackson County. Marker is on North Mechanic Street north of Armory Court, on the left when traveling north. Touch for map. Marker is at or near this postal address: 640, Jackson MI 49202, United States of America. Touch for directions. 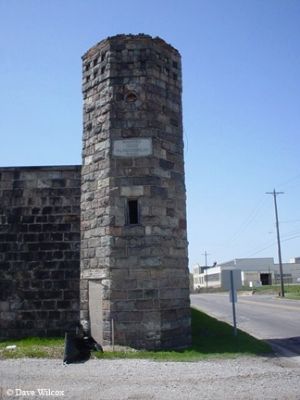 More about this marker. The grounds were used as the armory of the Michigan National Guard until 2007 and now houses The Armory Arts Village and the Armory Arts Apartments.

Regarding First State Prison. In 1837, Michigan became the 26th state. Jackson, Ann Arbor, Lansing, Marshall, Napoleon and Adrian all presented proposals to the newly formed state government to be the locale for Michigan’s First State Prison. Jackson won because 60 acres of land donated to the state by five Jackson pioneers would provide enough acreage for the prison cellblocks and the factories and farms where the convicts would work. This land was in the center of town, another important consideration.

In the height of The Industrial Revolution, prisoners were used as laborers in many of the factories burgeoning everywhere. Not only would the inmates work in factories upon the prison grounds. With ball and chain around their ankles, they would be marched to factories in town to provide a labor force for these, too. At 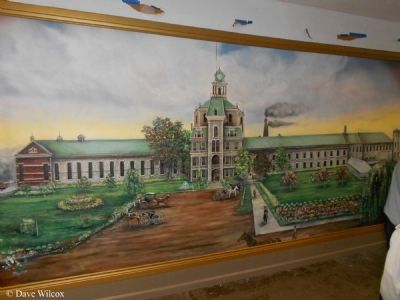 Photographed By Dave Wilcox, April 14, 2012
3. Mural of First Michigan State Prison - 1839
Painted by Jean Weir and Hector Trujillo. Located in main hall entryway.
33.5 cents per convict per day in each factory, their labor cost far less than the $1.50-$2.50 per day a non-convict would be paid. 5.5 cents went into an account for the convict so he would have something to live on while seeking employment once released. 28 cents went to the state government. Farms would provide the food for the prison, for saleable produce for townsfolk and for food to be shipped and purchased elsewhere. Work, it was believed, would provide both punishment and rehabilitation for those incarcerated.

By 1882, Michigan’s First State Prison had grown into the largest walled prison on the planet. It included factories that produced binder twine, fabric, machine parts, monuments, furniture, brushes, dishware and more. Inmates were taken across Mechanic Street to the world-famous Jackson Carriage and Wagon Company owned by Austin, Tomlinson and Webster. Here their labor built the number-one selling wagon that took pioneers westward during the Gold Rush. This wagon became the first mechanized automobile in the US going at the remarkable speed of 3 miles per hour!

Punishments were metered out with the mindset carried over from more medieval times. A code of silence prevailed, and breaking it resulted in the perpetrator’s wrists being chained together and stung up on a hook with the man’s feet four inches off the ground. He’d remain this way for anywhere 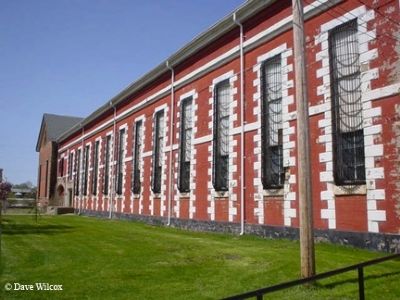 Photographed By Dave Wilcox, April 18, 2006
4. First State Prison Chow Hall
from 5-72 hours. Solitary confinement- “throw him in the dungeon”- left a convict in the dark, sleeping on a cold brick or concrete floor, and eating a diet of bread and water. This code of silence led to the uprising known as the 1912 riot in which six people – four inmates and two guards were killed. The Michigan National Guard stepped in and quelled the riot upon its sixth day.

Amidst the harsh life and prison cells that were as small as 5½ x 4½ ft., the prison and the town interacted. A prison band and a baseball team provided weekend and seasonal entertainment for the townsfolk. The huge iron gates were opened, and the genteelly attired townsfolk came with picnic baskets and blankets to be entertained by the band or watch the Clippers, the town baseball team, play against the MSP (Michigan State Prison) team. Annually, a watermelon festival gave Jacksonion’s, the opportunity to eat the luscious prison-farm grown watermelons while dancing upon the grounds to the tunes played by the prison band.

Michigan’s First State Prison built Jackson into a leading industrial city in the nation. Prison labor provided the bulk of Jackson’s workforce. Prison labor produced food sent to Union soldiers and those in WWI. The canning industry sent the Michigan produce and ultimately canned meat products throughout the country on the seven major railroads that passed through 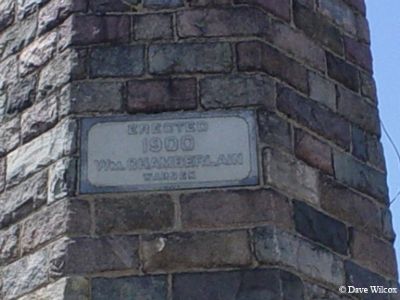 Photographed By Dave Wilcox, April 14, 2012
5. First State Prison - Northeast gun tower
Jackson in the era when Jackson was the hub between Chicago and Detroit.

In 1934, Michigan’s First State Prison closed. The inmates were moved three miles up on Cooper Street to the Southern Michigan State Prison. 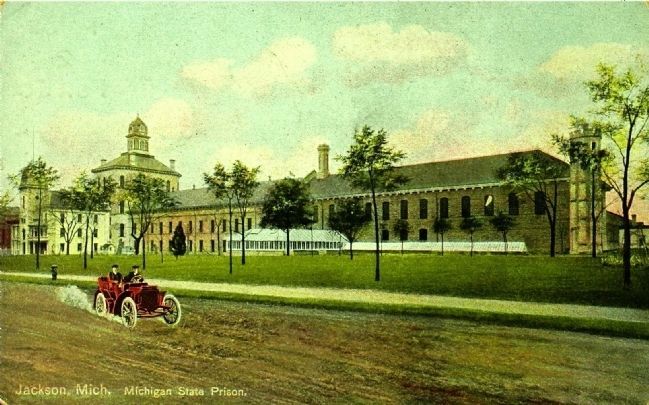