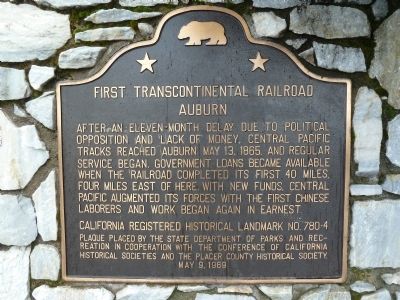 After an eleven-month delay due to political opposition and lack of money, Central Pacific tracks reached Auburn May 13, 1865, and regular service began. Government loans became available when the railroad completed its first 40 miles, four miles east of here. With new funds, Central Pacific augmented its forces with the first Chinese laborers and work began in earnest.

Topics and series. This historical marker is listed in this topic list: Railroads & Streetcars. In addition, it is included in the Transcontinental Railroad series list. A significant historical date for this entry is May 13, 1865.

Location. 38° 54.112′ N, 121° 3.968′ W. Marker is in Auburn, California, in Placer County. Marker is on Lincoln Way, 0.1 miles south of The Golden Chain Highway (California Highway 49), on the right when traveling north. This marker is installed in a wall of the Auburn Chamber of Commerce Corporate Headquarters. The bell tower and flag pole mark 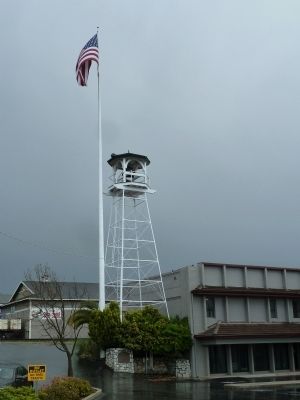 Photographed By Tceng, April 11, 2012
2. First Transcontinental Railroad Marker
The Bell Tower and Flag Pole. The flag pole may be made from a hydraulic mining monitor pipe.

Click or scan to see
this page online
the spot. Touch for map. Marker is at or near this postal address: 638 Lincoln Way, Auburn CA 95603, United States of America. Touch for directions.

More about this marker. This is the official marker for a community funded plaza, collection of train cars, original Auburn railroad station, and the Kenneth Fox "Chinese Coolee" sculpture commemorating the Transcontinental Railway in Auburn. 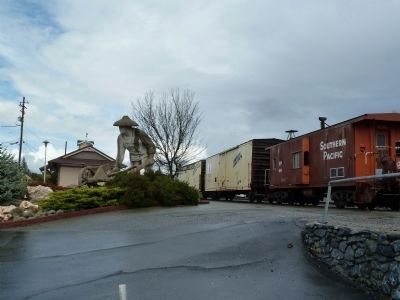 Photographed By Tceng, April 11, 2012
3. Placer County's First Transcontinental Railroad Commemoration Plaza
Auburn railroad station, box car, refrigerator car, caboose and Kenneth Fox commemorative Chinese Coolee sculpture. This is an interesting location to visit, finding the community spirit that assembled and maintains this point of pride.
Credits. This page was last revised on August 17, 2020. It was originally submitted on April 20, 2012, by Chris English of Phoenix, Arizona. This page has been viewed 956 times since then and 22 times this year. Last updated on April 25, 2012, by Keith S Smith of West Chester, Pennsylvania. Photos:   1, 2, 3. submitted on April 20, 2012, by Chris English of Phoenix, Arizona. • Syd Whittle was the editor who published this page.
Share this page.