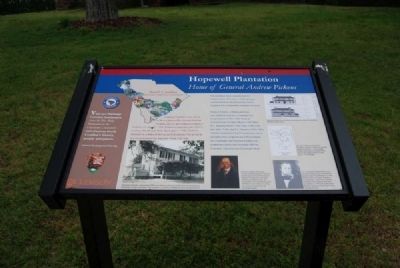 By Brian Scott, April 23, 2012
1. Hopewell Plantation Marker
Inscription.
Hopewell Plantation. Home of General Andrew Pickens. . Hopewell Plantation was home to Revolutionary War General Andrew Pickens and his wife, Rebecca Calhoun Pickens. On July 16, 1785, Pickens acquired a grant of 573 acres on the Seneca River. By August 1, 1785, Pickens received an additional 560 acres that adjoined the property and encompassed the adjacent Treaty Oak Site. . . The plantation home originally built for Pickens (circa 1785) was a small log home representative of a frontier pioneer home. Hopewell was substantially enlarged over time. . . General Pickens, a lifelong politician, held significant positions including: U.S. Congressman (1793-1795), Federal Commissioner of Indian Affairs (1785-1802), S.C. Representative (1783-1788, 1796-1799, and 1812-1813), and S.C. Senator (1790-1791). Pickens represented South Carolina as one of the state's first congressmen in Philadelphia and negotiated the Hopewell treaties that established peace and friendship with the Cherokee, Choctaw, and Chickasaw tribes. . This historical marker was erected in 2011 by South Carolina National Heritage Corridor. It is in Clemson in Pickens County South Carolina

Hopewell Plantation was home to Revolutionary War General Andrew Pickens and his wife, Rebecca Calhoun Pickens. On July 16, 1785, Pickens acquired a grant of 573 acres on the Seneca River. By August 1, 1785, Pickens received an additional 560 acres that adjoined the property and encompassed the adjacent Treaty Oak Site.

The plantation home originally built for Pickens (circa 1785) was a small log home representative of a frontier pioneer home. Hopewell was substantially enlarged over time.

General Pickens, a lifelong politician, held significant positions including: U.S. Congressman (1793-1795), Federal Commissioner of Indian Affairs (1785-1802), S.C. Representative (1783-1788, 1796-1799, and 1812-1813), and S.C. Senator (1790-1791). Pickens represented South Carolina as one of the state's first congressmen in Philadelphia and negotiated the Hopewell treaties that established peace and friendship with the Cherokee, Choctaw, and Chickasaw tribes. 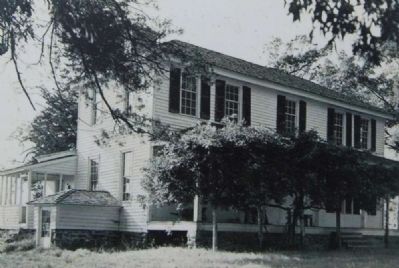 By Brian Scott, April 23, 2012
2. Hopewell Plantation Marker
Hopewell Plantation (pictured in 1930) has withstood the test of time and served Clemson University in many capacities. The property is currently available for tours by appointment.
is included in the South Carolina Heritage Corridor marker series. 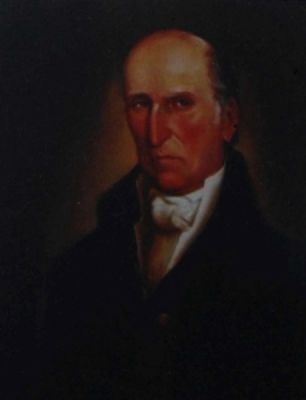 By Brian Scott, April 23, 2012
3. Hopewell Plantation Marker
General Andrew Pickens
Buried at nearby Old Stone Church, General Andrew Pickens' contributions to South Carolina's Upstate heritage are abundant through his namesakes: the neighboring town of Pickens and Pickens County, the county in which you are currently located.
as a log structure, Hopewell Plantation is representative of a rural house type, which was common in the late 18th and early 19th century in the South Carolina backcountry. (Submitted on April 27, 2012, by Brian Scott of Anderson, South Carolina.)

3. Hopewell Plantation. A brief story of Gen. Andrew Pickens, his wife, Rebecca Calhoun, and their historic home in Clemson, S.C. (Submitted on April 27, 2012, by Brian Scott of Anderson, South Carolina.) 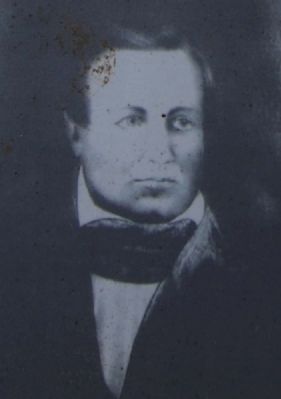 By Brian Scott, April 23, 2012
4. Hopewell Plantation Marker
Governor Andrew Pickens Jr
S.C. Governor Andrew Pickens Jr., General Pickens' son, inherited the property upon his retirement. As the 46th Governor of South Carolina, he followed in his father's political footsteps. The property was later purchased in 1954 during the New Deal by Clemson University for the Clemson Forest.
The Cherokee are a Native American people historically settled in the Southeastern United States (principally Georgia, the Carolinas and East Tennessee). (Submitted on April 27, 2012, by Brian Scott of Anderson, South Carolina.)

7. Chickasaw. The Chickasaw are Native American people originally from the region that would become the Southeastern United States (Mississippi, Alabama, Tennessee). (Submitted on April 27, 2012, by Brian Scott of Anderson, South Carolina.)

Additional comments.
1. Hopewell Plantation
On July 16, 1784, General Andrew Pickens bought a tract of land near the vicinity where in 1776 a party of Whigs, under General Andrew Williamson, had been ambushed and would have been completely annihilated had it not been for the timely arrival of Pickens and his men. The deed was for "573 acres more or less bounded on west by Keowee River and all sides by vacant lands. Consideration: 57 pounds, 6 shillings." The deed was signed by Governor Benjamin Guerard with the notation that the "full cash money" has been received from the Honorable Andrew Pickens.

A lodge was built on the land. In 1785 a house, overlooking the river was completed, but it was the following summer before the family moved into it. A devout Christian 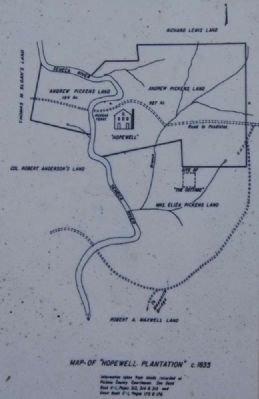 By Brian Scott, April 23, 2012
5. Hopewell Plantation Marker
Hopewell Plot
This plot shows the Hopewell Plantation property owned by General Andrew Pickens. Lt. Gov. Ezekiel Pickens (and later his widow Eliza) lived on an adjacent farm in their home, "The Cottage."
and an elder in the Presbyterian Church, Pickens named the new home, Hopewell, after his church in the Long Canes.

General Pickens' home, now on Clemson University land overlooking the lake, is a two-story structure built of large hand hewn logs overlaid with weather-boarding. A porch extends across the front of the house. The house has wide halls with two large rooms on either side. The large doors, mantels and panelled walls are very old and beautifully made. Beneath the house is a large basement room made of native stones with a grand fireplace.

Situated, as it was, on the frontier and near the boundary of the Cherokee Nation, Hopewell is rich in Indian history. On March 21, 1785, Congress appointed Pickens on a commission to treat with the Southern Indians - a position he held for nearly twenty years. From November 22, 1785 until January 10, 1786 the Indians from the Cherokee, Choctaw, and Chickasaw nations met consecutively with the United States Commissioners at Hopewell. Treaties, known hereafter as the Hopewell Treaties, were signed by the commissioners and the leading chiefs of the nations.

During the time that General Pickens made his home at Hopewell, he served in the State Legislature; Congress; and in 1812, after he had consented to run for governor, he withdrew from the race saying he believed the running of the government should be left 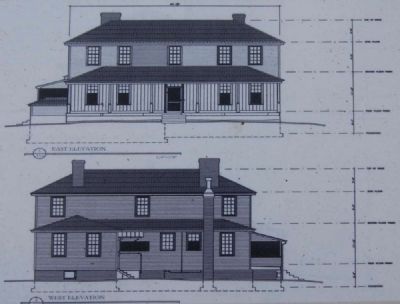 By Brian Scott, April 23, 2012
6. Hopewell Plantation Marker
Clemson University architectural drawings show the front and back elevations of the house.
to younger and more active men. Hopewell was also the home of the son, Ezekiel, who served as lieutenant governor (1802-1804); and Andrew Jr., who was governor of South Carolina from 1816-1818. When the General moved to Tamassee in the spring of 1805, he gave Hopewell to his sons, Ezekiel and Andrew. Andrew, who had married Susan Smith Wilkinson, lived in the family home and it was there than his son, Francis (born April 7, 1805) spent his childhood. He, too, served in the State Legislature, Congress, Minister to Russia, and was Secessionist governor of South Carolina, 1860-1862. Thus we find that Hopewell housed three generations of the Pickens family who served their country and state faithfully and well.

Ezekiel Pickens, Andrew's older brother, who served as lieutenant-governor of S.C. (1802-1804) also spent much time at Hopewell. Ezekiel owned another house (sometimes called "The Cottage") on his part of the "Hopewell settlement," south of Andrew's plantation. Ezekiel's house was still standing in the 1930s but is gone now.

General Andrew Pickens' wife, Rebecca Colhoun, was the sister of Senator John Ewing Colhoun, father of Mrs. John C. Calhoun, and it was really the Senator who, in the 1790s, had brought the Calhoun family into this area. He was doubly related to the Pickens since his wife's sister (Elizabeth Bonneau) married his nephew, Ezekiel Pickens. 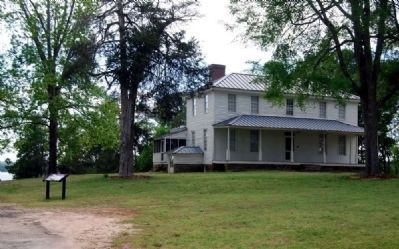 By Brian Scott, April 23, 2012
7. Hopewell Plantation and Marker
After "Betsy" Bonneau Pickens' death, Mrs. Floride Bonneau Calhoun brought up Ezekiel's daughter, Elizabeth, as though she were her own child and sister of her daughter, Floride. Elizabeth Pickens married Patrick Noble, who became Governor of South Carolina 1838-1840, and wife of the Vice-President of the United States. Ezekiel Pickens married a second time, Elizabeth Barksdale (Mrs. Eliza Pickens), who lived until 1859, so that Ezekiel's part of the Hopewell property of his father remained in the family long after Andrew's "Hopewell Plantation" has been sold.

In 1824, after moving to Alabama, Andrew sold his land to Congressman John Carter of Camden. Carter's brother-in-law, Horace Reese, had arranged to buy the property in 1829 and after his death the transaction was completed by Charles M. and George Reese, Jr. (nephews of the beloved Rev. Thomas Reese). The Reeses advertised the property for sale in the Pendleton Messenger as "Hopewell Plantation, lying on both sides of Seneca River, 11,000 acres. Large dwelling house. Ferry boat."

In 1835 it was advertised again by David Cherry (who married Mary Story Reese, daughter of George Reese, Sr.): "...lying on both sides of Seneca River, known by the name of Hopewell, the former residence of Gen. Andrew Pickens..." David Cherry bought the property himself and it became known as "the Cherry Place." 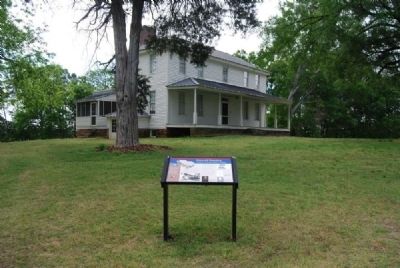 By Brian Scott, April 23, 2012
8. Hopewell Plantation and Marker
this time (1835) a plat made by Martin S. McCay, preserved in the Pickens County Courthouse, Book C, page 176) shows the general location of the house, the ferry across the Seneca River and the road to Pendleton, which would have been part of the famous "General Pickens wagon road" to Abbeville, the best-known road in the area. (Source: Pendleton Historic District: A Survey by the Pendleton District Historical and Recreational Commission, pg 20.)
— Submitted April 27, 2012, by Brian Scott of Anderson, South Carolina.
2. Andrew Pickens (1739-1817)
Andrew Pickens, (grandfather of Francis Wilkinson Pickens), a Representative from South Carolina; born in Paxton, Bucks County, Pa., September 13, 1739; attended the common schools; moved with his parents to the Waxhaw settlement in South Carolina in 1752; served in the provincial militia in the campaign against the Cherokee Indians in 1760; entered the Revolutionary Army as captain of militia and attained the rank of brigadier general; commanded an expedition against the Cherokee Indians in 1782; member of the state house of representatives 1781-1794; one of the commissioners named to settle the boundary line between South Carolina and Georgia in 1787; member of the state constitutional convention in 1790; elected as an Anti-Administration 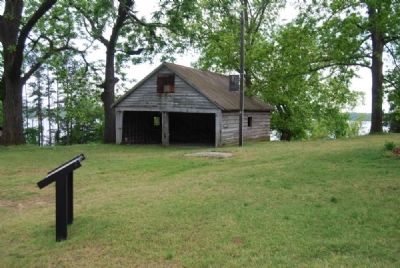 By Brian Scott, April 23, 2012
9. Hopewell Plantation
East (Front) Entrance
candidate to the Third Congress (March 4, 1793-March 3, 1795); appointed major general of militia in 1795; unsuccessful candidate for election to the United States Senate in 1797; member of the state house of representatives 1800-1812; declined the nomination for governor in 1812; died in Tomassee, Pendleton District, S.C., August 11, 1817; interment in Old Stone Churchyard, near Pendleton, S.C. (Source: Biographical Directory of the U.S. Congress.)
— Submitted April 27, 2012, by Brian Scott of Anderson, South Carolina.
3. Francis Wilkinson Pickens (1805-1869)
Francis Wilkinson Pickens, (grandson of Andrew Pickens), a Representative from South Carolina; born on a plantation on the Toogoodoo River, St. Paul’s Parish, Colleton District, S.C., April 7, 1805; completed preparatory studies; attended Franklin College, Athens, Ga., and was graduated from South Carolina College (now the University of South Carolina) at Columbia; studied law; was admitted to the bar and commenced practice in Edgefield District in 1829; engaged in planting; member of the state house of representatives 1832-1833; elected as a Nullifier to the Twenty-third Congress to fill the vacancy caused by the resignation of George McDuffie; reelected as a Nullifier to the Twenty-fourth and Twenty-fifth Congresses 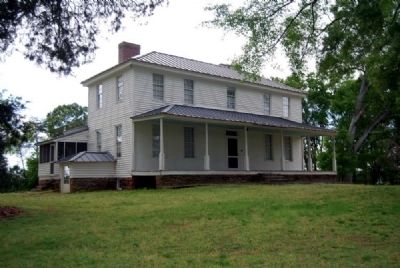 By Brian Scott, April 23, 2012
10. Hopewell Plantation
and elected as a Democrat to the Twenty-sixth and Twenty-seventh Congresses and served from December 8, 1834, to March 3, 1843; chairman, Committee on Foreign Affairs (Twenty-sixth Congress); member of the state senate 1844-1846; member of the Nashville southern convention in 1850; delegate to the Democratic National Convention in 1856; unsuccessful candidate for the United States Senate in 1857 to fill the vacancy caused by the death of Andrew P. Butler; Minister to Russia 1858-1860; governor of South Carolina 1860-1862; died in Edgefield, Edgefield County, S.C., January 25, 1869; interment in Edgefield Cemetery. (Source: Biographical Directory of the U.S. Congress.)
— Submitted April 27, 2012, by Brian Scott of Anderson, South Carolina. 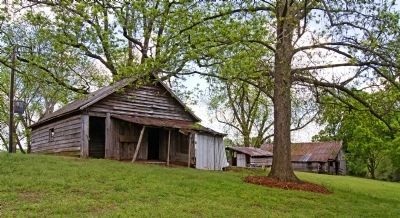 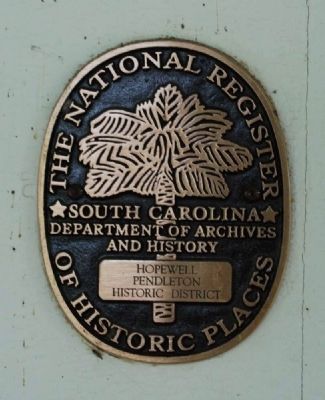