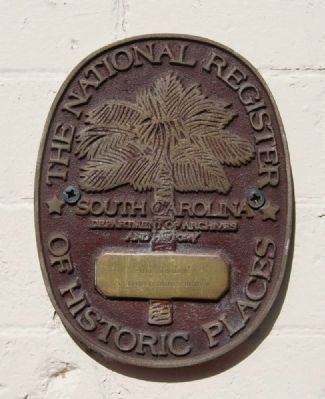 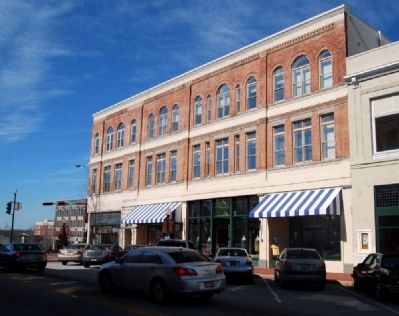 Additional commentary.
1. The Belk-Hudson/Palmetto Building (ca. 1880) - National Register Nomination Form (1999)
The Belk-Hudson Department Store operated in this building for many years before closing and moving to another location. Originally known as the Palmetto Building, this three-story-over-basement building was constructed ca. 1880 and housed many Spartanburg businesses such as the Cecil Business School and the Central National Bank. In 1959 the original brick was covered with interlocking metal panels which masked the upper stories, and the storefronts were also altered with the application 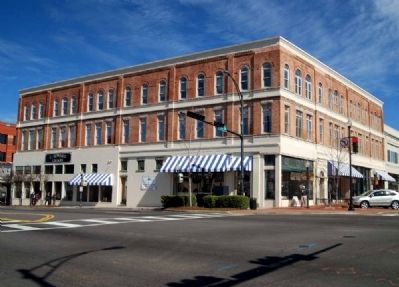 Photographed By Brian Scott, February 14, 2011
3. Palmetto Building
of new materials. The interlocking panels were removed in March 1998. Though the first and second floor interiors have been significantly altered, the third floor interior remains intact, with ca. 1880 office partitions, wainscoting, and decorative woodwork. The arched windows have not been changed and still possess some of their transoms and one-over-one sash windows. With the original brick facade and elevations exposed, the corner of Main and Church streets reclaims a distinctive historic property for the center of downtown Spartanburg.

The Belk-Hudson/Palmetto Building is part of a large commercial block located in the heart of the city. The building is "L"-shaped and three stories in height with six vertical divisions on North Church Street and six vertical divisions on East Main Street. Most of the vertical divisions contain three window bays. The building is constructed of brick and stone with corbelled brickwork and granite belt courses. Behind the building's parapet is a typical shed-like built-up commercial roof. The structural system is a combination of steel and wood framing. On the East Main Street facade a stairway accesses the second and third floors through a pilastered arched doorway. The first floor has four commercial bays on East Main Street and three commercial bays on North Church Street. Windows on the second floor have granite lintels and all windows on the third floor are fully arched. Above these windows,
fragments of the original egg-and-dart crown molding is still visible. Interior features include beaded board wainscoting with rondel-ornamented rail, bracketed mantelpieces, door casings with glazed transoms, doors on the second and third floors, original pine and marble flooring, and some of the decorative pressed metal ceilings. The first floor was renovated more than once during the period ca. 1950-ca. 1970 as a large department store. The exterior was covered with metal panels ca. 1959 that were removed in 1998. The second and third floors remain largely unchanged except for the removal of most of the original window frames. Moderate deterioration has occurred on the second and third floors due to a few roof leaks.
— Submitted May 6, 2012, by Brian Scott of Anderson, South Carolina.
Credits. This page was last revised on June 16, 2016. It was originally submitted on May 6, 2012, by Brian Scott of Anderson, South Carolina. This page has been viewed 527 times since then and 46 times this year. Photos:   1, 2, 3. submitted on May 6, 2012, by Brian Scott of Anderson, South Carolina.
Share this page.