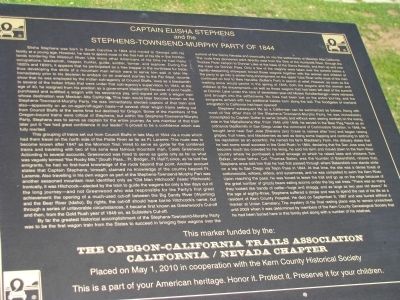 Elisha Stephens was born in South Carolina in 1804 and moved to Georgia with his family at a young age. However, he was to spend most of the first half of his life in the frontier lands bordering the Missouri River. Like many other Americans of his time he had many occupations: blacksmith, trapper, hunter, guide, soldier, farmer, and explorer. During the 1820’s and 1830’s, it appears that he participated as a free trapper in the northwest fur trade, thus developing the skills of a mountain man which were to serve him well in later life. Immediately prior to his decision to embark on an overland journey to the Far West, records show that he was employed by the Indian sub-agency at Council Bluffs, Iowa as a blacksmith to several of the Indian tribes that were under that sub-agency’s supervision. In 1844, at the age of 40, he resigned from his position as a government blacksmith because of poor health, purchased and outfitted a wagon with his severance pay, and signed on with a wagon train whose destination was Mexican Alta California. This train would later become known as the Stephens-Townsend-Murphy Party. He was immediately elected captain of the train and also-apparently on an on-again/off-again basis-of several other wagon trains setting 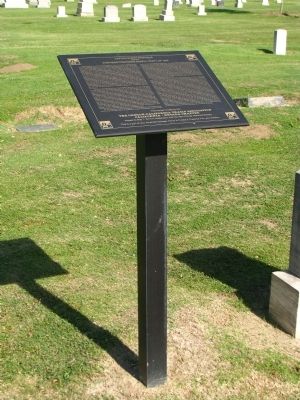 By Denise Boose, May 5, 2012
2. Captain Elisha Stephens Marker
out from Council Bluffs at the same time but destined for Oregon. Some of the members of the Oregon-bound trains were critical of Stephens, but within the Stephens-Townsend-Murphy Party, Stephens was to served as captain for the entire journey. As one member of the train later put it: ”We had great confidence in our leader.” It proved to be a confidence which was fully merited.

This grouping of trains set out from Council Bluffs in late May of 1844 via a route which had them travel on the north side of the Platte River as far as Ft. Laramie. This route was to become known after 1847 as the Mormon Trail. Hired to serve as guide for the combined trains and traveling with two of his sons was famous mountain man, Caleb Greenwood. According to several accounts, Greenwood was hired to serve as guide only as far as what was vaguely termed ”the Rocky Mts.” [South Pass…Ft. Bridger…Ft. Hall?] since, as he told the emigrants, he had no first-hand knowledge of the route beyond that point. Another account states that Captain Stephens, himself, claimed no knowledge of the country beyond Ft. Laramie. Also traveling in his own wagon as part of the Stephens-Townsend-Murphy Part was another seasoned mountain man identified only as “Old Man Hitchcock” (Isaac Hitchcock). Ironically, it was Hitchcock-elected by the train to guide the wagons for only a few days out of the long journey-and not Greenwood who was responsible for the Party’s first great achievement: 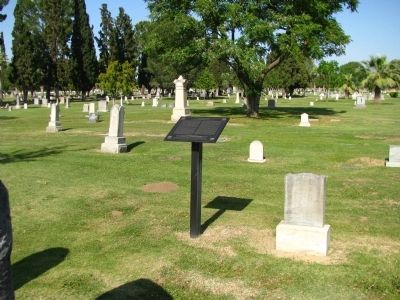 By Denise Boose, May 5, 2012
3. Captain Elisha Stephens Marker
the opening of much-used cut-off between the Big Sandy River (Wyoming) and the Bear River (Idaho). By rights, the cut-off should have borne Hitchcock’s name, but through a series of unfavorable circumstances, it became first known as Greenwood’s Cut-off and then, from the Gold Rush year of 1849 on, as Sublette’s Cut-off.

By far the greatest historical accomplishment of the Stephens-Townsend-Murphy Party was to be the first wagon train from the States to succeed in bringing their wagon over the summit of the Sierra Nevada and eventually on into the settlements of Mexican Alta California. The route they pioneered went directly west from the Sink of the Humboldt River, through the Truckee River canyon to Donner Lake at the base of the Sierra Nevada, and then up and over the crest via Donner Pass. Only a few of the wagons were taken over the summit before a rapidly-deepening snowpack forced those wagons together with the women and children of the party to go into a winter-long encampment on the upper Yuba River while most of the men continued on foot to New Helvetia (Sutter’s Fort) in search of relief. However, as soon as the melting snow would permit in the spring of 1845, both the wagons and the women and children at the encampment-as well as those wagons that had been left east of the summit at Donner Lake under the care of seventeen-year-old Moses Schallenberger-were retrieved and brought into the settlements. No lives had been lost on the entire journey, and the emigrants 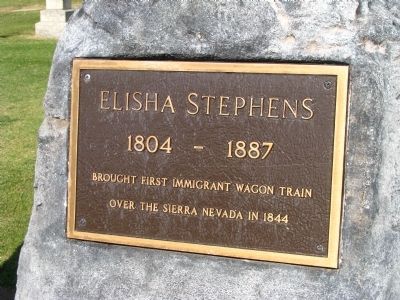 By Denise Boose, May 5, 2012
4. Captain Elisha Stephens Marker
Elisha Stephens 1804-1887 Brought First Immigrant Wagon Train over the Sierra Nevada in 1844
arrived with two additional babies born along the trail. The floodgates of overland emigration to California has been opened!

Stephens’ subsequent life as a Californian can be summarized as follows: Along with most of the other men of the Stephens-Townsend-Murphy Party, he was immediately conscripted by Captain Sutter to serve (briefly and without even seeing combat) on the losing side in the Micheltorena War. From 1846 until 1848, he served in the Bear Flag Revolt as an ordnance blacksmith in San Diego under the command of Commodore Stockton. In 1848, he bought land near San Jose [Stevens (sic) Creek is named after him] and began raising grapes, fruit trees, and blackberries as well as doing some trapping and continuing to add to his reputation as an eccentric. He named his farm Blackberry Farm. His obituary states that he had some small success in the Gold Rush. In 1864, declaring the San Jose area had become much too crowded for his liking, he sold his farm and moved down to the Kern River country where he purchased a small acreage on which he raised bees and chickens. Tom Baker, whose father, Col. Thomas Baker, was the founder of Bakersfield, relates that Stephens once told him that he had first passed through where Bakersfield now stands while on a trip to San Diego via Tejon Pass in 1844. At that time, the site was a dense forest of cottonwoods, willows, elders, and sycamores, and he was compelled to swim the Kern River. Upon reaching the pass, he was forced 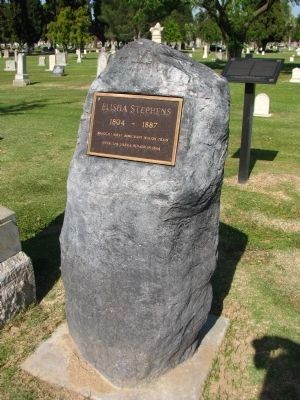 By Denise Boose, May 5, 2012
5. Captain Elisha Stephens Grave Marker
to leave the trail and go up on the ridge because of the great number of grizzly bears eating acorns under the big oak tress. “There was so many they looked like bands of cattle-huge and shaggy, and as large as two year old steers.” At the age of eighty-three, Stephens suffered a stroke and was to spend the rest of his life as a resident of Kern County Hospital. He died on September 9, 1887 and was buried without a marker at Union Cemetery. The mystery of his final resting place was to remain unresolved until 2009 when it was determined by members of the Kern County Genealogical Society that he had been buried here in this family plot along with a number of his relatives.

Other nearby markers. At least 8 other markers are within 2 miles of this marker, measured as the crow flies. Pablo Galtes - Union Cemetery (about 500 feet away, measured in a direct line); Eternal Flame (about 700 feet away); Don José Jesús (J. J.) Lopez 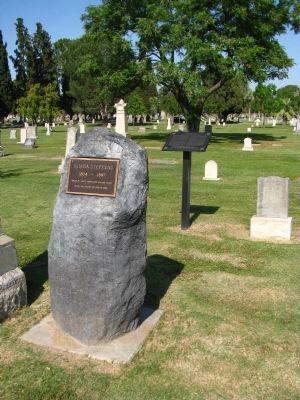 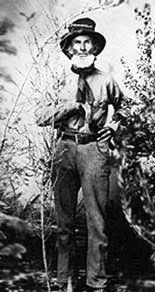 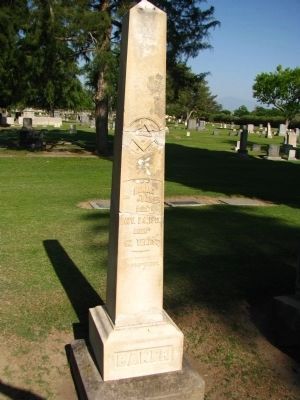