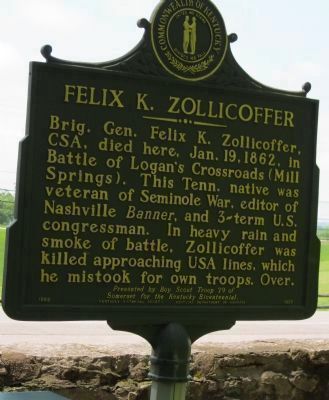 Felix K. Zollicoffer: Brig. Gen. Felix K. Zollicoffer, CSA, died here, Jan. 19, 1862, in Battle of Logan's Crossroads (Mill Springs). This Tenn. native was veteran of Seminole War, editor of Nashville Banner, and 3-term U.S. congressman. In heavy rain and smoke of battle, Zollicoffer was killed approaching USA lines, which he mistook for his own troops. Over.

"Zollie Tree": This large, white oak has been decorated annually in honor of Gen. Zollicoffer since 1902, when Dorotha Burton began tradition. Over 100 CSA soldiers are in mass grave at rear of park. Zollicoffer is buried in Nashville. Boy Scout Troop 79 Trail follows Confederate retreat to Cumberland River. Over. 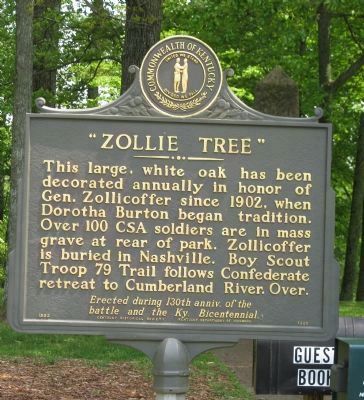 By David Graff, April 26, 2012
2. Felix K. Zollicoffer, "Zollie Tree" Marker Side 2
Nancy, Kentucky, in Pulaski County. Marker is on Kentucky Route 235 0.1 miles south of Kentucky Route 761, on the left when traveling south. Marker is at Tour Stop 2: "Confederate Cemetery" of the Mill Springs Battlefield Driving Tour beside the Cemetery Gate. Touch for map. Marker is in this post office area: Nancy KY 42544, United States of America. Touch for directions.

More about this marker. The "Zollie Tree" description refers to a tree that blew down in a 1995 storm. A replacement tree was planted at the same location and is described in another interpretive sign nearby. 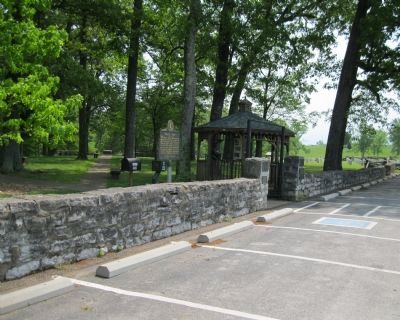 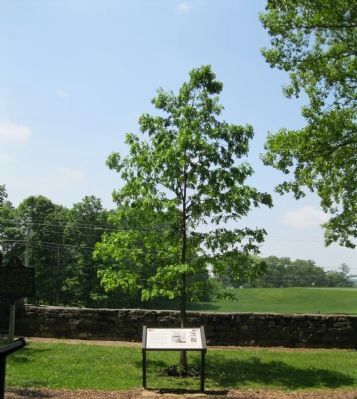 By David Graff, April 26, 2012
4. The "Zollie Tree"
White Oak tree replanted from seedlings of the original tree which blew down in a 1995 storm. 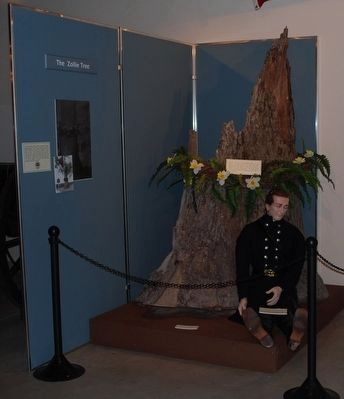