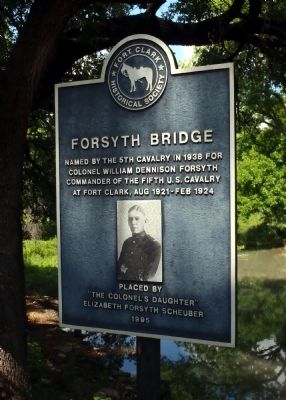 Photographed By William F Haenn, May 13, 2012
1. Forsyth Bridge Marker
Inscription.
Forsyth Bridge. . Named by the 5th Cavalry in 1938 for Colonel William Dennison Forsyth Commander of the Fifth U.S. Cavalry at Fort Clark, Aug 1921 - Feb 1924 Placed by "The Colonel's Daughter" Elizabeth Forsyth Scheuber 1995 . This historical marker was erected in 1995 by Fort Clark Historical Society. It is Near Brackettville in Kinney County Texas

Named by the 5th Cavalry in 1938 for Colonel William Dennison Forsyth Commander of the Fifth U.S. Cavalry at Fort Clark, Aug 1921 - Feb 1924 Placed by "The Colonel's Daughter" Elizabeth Forsyth Scheuber 1995

Topics. This historical marker is listed in this topic list: Military. A significant historical month for this entry is February 1924.

Location. 29° 17.376′ N, 100° 25.488′ W. Marker is near Brackettville, Texas, in Kinney County. Marker is on Pecan Road, on the left. Marker is locate on Fort Clark Springs and is accessible to the public. Touch for map. Marker is at or near this postal address: at entrance to the Fort Clark Golf Course, Brackettville TX 78832, United States of America. Touch for directions. 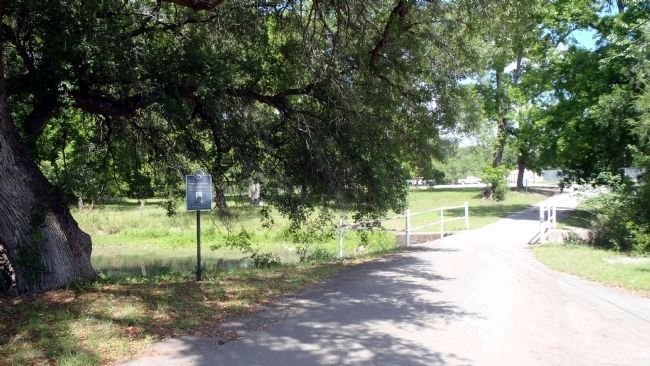 More about this marker. The marker features a photo etching of Colonel Forsyth.

Additional commentary.
1. Forsyth Bridge
On Saturday, April 29, 1995 the Fort Clark Historical Society dedicated its first “local marker.” The guest of honor was Mrs. Elizabeth Forsyth Scheuber, of San Angelo, Texas. Miss Elizabeth descended from soldier ancestors as familiar to military men of the late 19th and early 20th century as MacArthur is to later generations. Her grandfather, Major General James W. Forsyth, while Colonel of the 7th Cavalry in 1891, was in command at Wounded Knee, the final engagement of the Indian Wars. He graduated 28th from the U.S. Military Academy class of 1856, having experienced as a cadet the example and mentorship of Robert E. Lee, then Superintendent of West Point. For his gallantry and meritorious service during the Civil War, Forsyth was honored with three brevet promotions, achieving the rank of Brigadier General of Volunteers by war’s end. He became Major of the newly formed 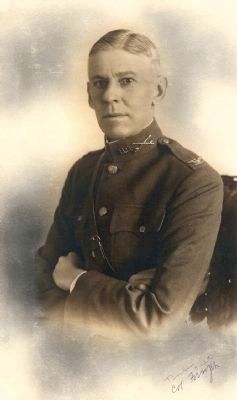 1921
3. Colonel William D. Forsyth (Photo etching used on the marker)
10th Cavalry (Buffalo Soldiers) in 1866 and in 1869 Aide-de-camp to Lieutenant General Philip H. Sheridan. It was while serving as General Sheridan’s aide that LtCol Forsyth, in all likelihood, visited Fort Clark on March 30, 1873 where Secretary of War William Belknap and General Sheridan secretly met with Colonel Ranald S. Mackenzie, 4th Cavalry, and authorize the pursuit of hostile Indians into Mexico precipitating the Remolino Raid. Later, as Sheridan’s Military Secretary, Colonel and Mrs. Forsyth were blessed with a son, William Dennison, born March 28, 1876, at Headquarters for the Division of the Missouri in Chicago, Illinois. James W. Forsyth retired from the Army on May 14, 1897 as a Major General, ending a distinguished military career which spanned over four decades.

With the coming of the Spanish American War young William Dennison Forsyth followed his father into the army, being appointed a lieutenant in the 1st Ohio Cavalry in April 1898. When the “Splendid Little War” ended Lieutenant Forsyth cast his lot with the Regular Army. He was assigned to the 19th Infantry and served with Major Francis H. French for a short time before being transferred to the 5th Cavalry at Fort Clark in October of 1898. Before the year ended the regiment deployed to the Philippines. Except for short periods of schooling at the Infantry and Cavalry Schools in 1905 and 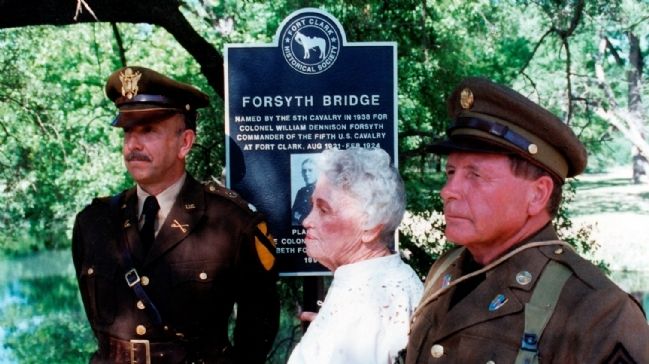 Photographed By William F Haenn, April 29, 1995
4. Elizabeth Forsyth Scheuber, "the Colonel's Daughter" at the marker dedication
the Mounted Service School in 1912, along with brief assignments in the 15th Cavalry and 24th Cavalry, Colonel Forsyth spent the bulk of his career in the 5th Cavalry.

Following service in the World War, where he received promotion to Colonel, he returned to the Regiment which had been his home and in August 1921 was given command of the 5th Cavalry then posted at Camp Marfa, Texas. In the fall of 1921 the 5th Cavalry moved to Fort Clark. Miss Elizabeth, then six years old, remembered the journey to Fort Clark as riding in an open staff car with her mother and bivouacking each night with the soldiers who were on horseback. When the Forsyth family arrived at Fort Clark they moved into Quarters #29, the Post Commander’s house (Wainwright House). In 1922 the 1st Cavalry Brigade was formed at Fort Clark and a General Officer would now occupy the Post Commander’s house forcing the Forsyths to move to Quarters #24 (Patton House). Miss Elizabeth had many fond memories of her childhood at Fort Clark and her privileged status as “the Colonel’s daughter.” She remembered being picked up each morning in front of the quarters by an Army escort wagon to take her to school. She also recalled a very special occasion when her mother got out the best silver and prepared an elegant meal for an old friend of her father’s who made a social call to Fort Clark, General John J. Pershing 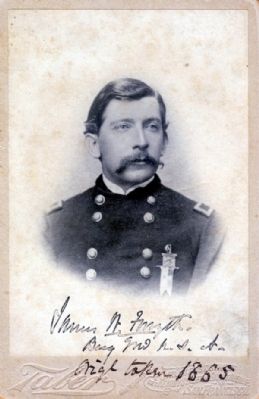